United fell behind after 12 minutes when Edin Visca found Demba Ba with a long pass in acres of space and the striker ran forward before knocking the ball past goalkeeper Dean Henderson. 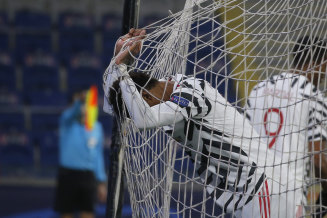 Marcus Rashford looks for a place to hide during Manchester United’s 2-1 loss to Istanbul Basaksehir.Credit:AP

Basaksehir doubled their lead five minutes before half-time after Deniz Turuc nicked the ball from Juan Mata and passed to Ba who set up Visca to score.

Anthony Martial's header two minutes later gave United hope but despite enjoying plenty of possession in the second half, they were unable to break down the Turkish side's disciplined defence.

United, who beat last season's runners-up Paris Saint-Germain and RB Leipzig in their first two games, top Group H with six points from three matches and Basaksehir have three after their first victory in the competition. Leipzig host PSG later on Wednesday.

In St Petersburg, Felipe Caicedo produced another of his familiar late strikes to give Lazio, below-strength after several positive COVID-19 tests, a 1-1 draw away to Zenit. 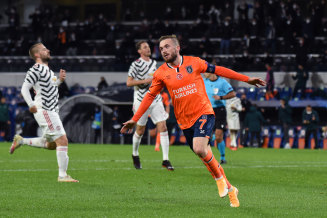 Edin Visca celebrates what proved to be the decisive goal for the Turkish hosts.Credit:Getty

Lazio, who have five points from three games, said on the eve of the match that some members of the squad had tested positive before travelling to Russia.

They were not named but coach Simone Inzaghi said that goalkeeper Thomas Strakosha, midfielder Lucas Leiva and leading scorer Ciro Immobile were among those who stayed behind.

The first half hour was a cagey affair before Zenit, who picked up their first point, broke the deadlock. Yuri Zhirkov crossed from the left and, after a quick session of head tennis among three Zenit players, Erokhin volleyed home from close range.

The well-travelled Ecuadorean has made a habit of coming off the bench and scoring late goals, most recently in the 4-3 win at Torino on Sunday when he grabbed the winner in the eighth minute of stoppage time.