Man Utd: What could tempt Haaland to Old Trafford?

Manchester United may have been given new hope in their aspirations to sign Erling Haaland from Borussia Dortmund this summer. Haaland’s agent, Mino Raiola, and father, Alf-Inge Haaland, made headlines this week as they were spotted travelling to Barcelona and Real Madrid to begin transfer discussions.

They’re expected to arrive in England next on their tour of teams who could realistically afford a move for Haaland this summer.

Dortmund say they won’t listen to offers this summer with his £68million release clause not being active until 2022.

But the Bundesliga outfit can demand the highest price at the end of this season with a bidding war expected among Europe’s elite teams.

United are one of several clubs likely to be in with a chance of signing Haaland having already expressed an interest during his time at Red Bull Salzburg. 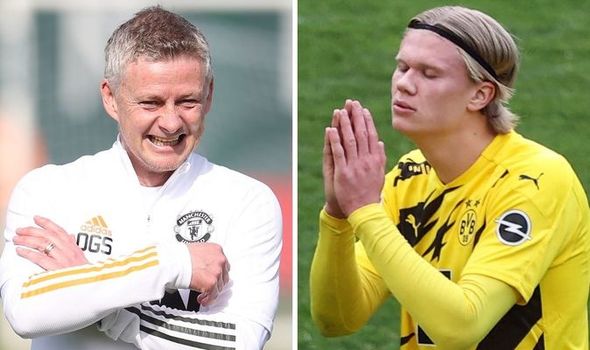 There has been some speculation that Dortmund will look to receive around £150m for Haaland this summer.

But they may not have such a strong negotiating position following their disappointing 2-1 defeat to Eintracht Frankfurt on Saturday.

Dortmund were four points adrift of Frankfurt in the final Champions League qualification spot before kick off.

But a late winner from Andre Silva gave Frankfurt a huge win in their hopes for a top-four finish.

And Dortmund now face a mountain to climb in order to qualify for next season’s Champions League, seven points separating the two teams.

They only have seven league games left which includes fixtures against Wolfsburg, RB Leipzig and Bayer Leverkusen.

But finishing outside the top four could have huge ramifications for Dortmund in the summer transfer window.

Haaland will want to be playing Champions League football next season and United are in a strong position already to be confident they will be in next season’s competition.

Chelsea have also been strongly linked, but their defeat to West Brom could see them drop down to sixth by the start of next week. 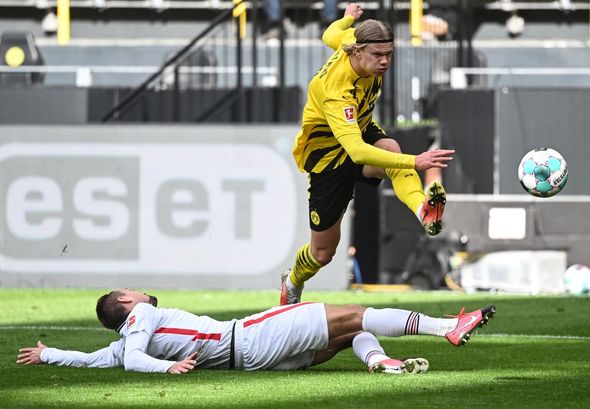 Ole Gunnar Solskjaer was asked about United’s reported interest in Haaland this week, but he refused to be drawn into a discussion.

“I am focussing on the next two months and the ones who are here,” he said.

“It is not fair to talk about Erling as Man Utd manager. He will make his own mind up.”

But the United boss did confirm that plans are already in place for new signings this summer.

“We have a plan and a plan we want to happen,” he said.

“Two months is a long time, a couple of players whose future hasn’t been decided yet.

“We have a certain picture for August, yeah.”