If Paris Saint-Germain were to have any hope of reaching the Istanbul final, they needed to score at least twice at the Etihad. Mauricio Pochettino’s side attempted 14 shots on Manchester City’s goal. Of those, one – a Marquinhos header, again – hit the woodwork. Another four went wide. The rest, all nine of them, were blocked.

Fernandinho, Bernardo Silva and match-winner Riyad Mahrez all threw their bodies on the line once, as did Oleksandr Zinchenko, who brilliantly repelled a Neymar attempt at the start of the second half. John Stones rebuffed two shots. Ruben Dias, remarkably, put himself in the way of the ball three times.

Those nine shots which Pep Guardiola’s players blocked to secure their place in City’s first-ever Champions League final later this month was their most in a single game all season, surpassing their previous high of five set at the Parc des Princes in the first leg a week earlier.

Technically, blocking many shots should not be interpreted as a sign of an impressive defensive performance. The opposition still found the time and space to get those shots away. A half-second quicker on the attacking player’s part or a half-second slower on the defender’s and it could easily have resulted in a shot on target or a goal.

It’s like how Paolo Maldini used to say that if he had to make a tackle, he had already made a mistake. If you are having to repeatedly fling your body out at full stretch or even throw your face in the firing line, as Dias did to turn away an Ander Herrera cross at one point, then maybe you are messing up earlier on in those moves.

And yet at the same time, there are few things quite as viscerally satisfying for a defender as throwing your body in the way of a goal-bound ball. That much was clear from the reaction to Zinchenko’s aforementioned block on Neymar, which led the City left-back, Stones and Dias to celebrate wildly with each other as if one of them had just scored at the other end.

City have been extraordinarily solid this season. On top of 18 league clean sheets, they have allowed just four goals this competition. Between Luis Diaz’s breakthrough for Porto in the opening group game to Marco Reus’ quarter-final equaliser last month, Guardiola’s side went 790 minutes without conceding, the second longest run in the Champions League era. This semi-final second leg was not the type of defending that we have come to expect, though.

City are an exceptional defensive side mainly because they have so much of the ball and as long as they have the ball, their opponents cannot score. On the odd occasions when their opponents do have the ball, City’s compactness and structured positional play suffocates whoever’s up against them and their often futile attempts to attack. It was not always like that in this second leg, though. 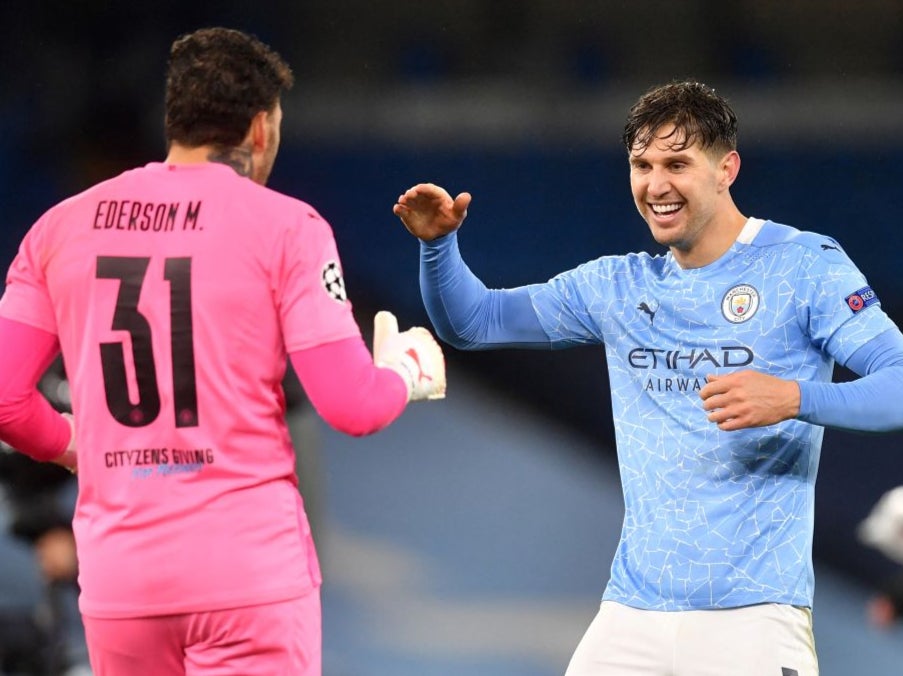 City had just 44% possession, their lowest share at home all season. Defending with the ball was out of the question for long periods. And before Paris conceded the second and succumbed to bouts of silly petulance, they had some success finding avenues through midfield. Guardiola wants to press from the front and for all of his players to contribute in all phases of play but on several occasions, particularly in the first half, the defending was solely down to his defence.

They proved to be up to the task. Between Dias, Stones, Zinchenko and Kyle Walker, who played well enough to earn a kiss on the cheek from his manager after the final whistle, were all excellent. It is genuinely difficult to pick the most impressive performer. Each of them excelled when called upon to carry out the type of one-on-one defending that they usually don’t need to indulge in.

It demonstrated that this City side can defend in a rather more traditional sense, through tackles, interceptions and those many, many blocks, not just through possession of the ball. And like with the comebacks against Dortmund and in the first leg, it also showed that they have different strings to their bow, ones that we were previously unsure existed.

That has been a common theme throughout this Champions League run and only strengthens the increasingly compelling argument that, whatever the outcome of the final, they have been the best and most complete side in Europe this season.

Soccer
John Kennedy: Celtic, Rangers 'B' teams can stop players from 'falling through the net'