From Bootham Crescent to Istanbul. Manchester City, a club once synonymous with calamity, who have graced the third tier of English football during most of their players’ lifetimes, have reached their first-ever Champions League final. It is the great stage that the Abu Dhabi ownership which revolutionised their fortunes has always coveted, one on which they will now compete.

Pep Guardiola has the opportunity to end his decade-long wait for success at this exalted level and reinforce his reputation as the finest coach of his generation, which had been dented and damaged by the quarter-final failures of the last few years. Having cleared that hurdle, they have now made yet another step forward, with Riyad Mahrez’s double carrying them to a final where either Chelsea or Real Madrid will await.

It could be the crowning moment of one of the most lavishly funded and devastatingly successful projects in the history of European football. Another is still waiting to taste that ultimate success. Paris Saint-Germain, losing finalists a year ago, could not overturn their home defeat to a single-goal deficit in last week’s first leg, their hopes of doing so dented by Kylian Mbappe’s confinement to the bench.

PSG’s victories away to Barcelona and Bayern Munich in the two previous rounds laced this second leg with the potential for a turnaround, as did their manager’s history on this ground in the knock-out stages of this competition, but City avoided suffering any further agony at the hands of Mauricio Pochettino. Instead, their visitors suffered the ignominy of a 4-1 aggregate defeat and another sending off, with Angel Di Maria seeing red.

Last week’s first leg and second half turnaround in Paris provided City with two away goals, a slender advantage and a platform on which to build, even if they had not killed the tie off when facing 10 men after Idrissa Gueye’s dismissal. Mbappé’s absence helped, nevertheless, with a calf problem picked up in the weekend’s victory over Lens keeping him out of the starting line-up.

A hard and practically horizontal Manchester hail dusted the Etihad pitch with a white coating in the hours leading up to kick-off but, even though the officials were forced to conduct a brief pitch inspection, there was very little chance of this city having a second game called off at short notice in the space of two days.

Still, the conditions made the early stages difficult for both sides and City survived an early scare when Abdou Diallo’s unpredictable cross struck Oleksandar Zinchenko’s arm, according to referee Bjorn Kuipers. The City bench begged to differ, insisting that it had hit his shoulder and demanding a review. One glance at the pitchside monitor and they were saved.

If Kuipers’ initial, blatantly incorrect decision had stood and the penalty had been converted after just six minutes, it would have been game on, Mbappé or no Mbappé. Instead, City tightened their grip on the tie. Mahrez, scorer of the decisive free-kick in Paris, applied the finish from a narrow angle but in-keeping with Guardiola’s unique methods, this goal was all about the goalkeeper.

A long ball out from the man between the posts used to be known as ‘route one’ but Ederson’s part in the opener was more sophisticated than that. Starting outside of his own box, he drew PSG’s press towards him, exchanged a one-two with Ilkay Gundogan then sprayed a raking pass into the space that City’s visitors had vacated, where Zinchenko was waiting to break into space.

A low cross to the edge of the area set De Bruyne up for a shot that was blocked but the rebound fell kindly for Mahrez, who beat Presnel Kimpembe to the loose ball, shot through Keylor Navas’ legs and found the far corner. PSG had always needed to score twice but now that would only be enough to force extra time. Only 101 minutes of the tie were up yet City were firmly in command. 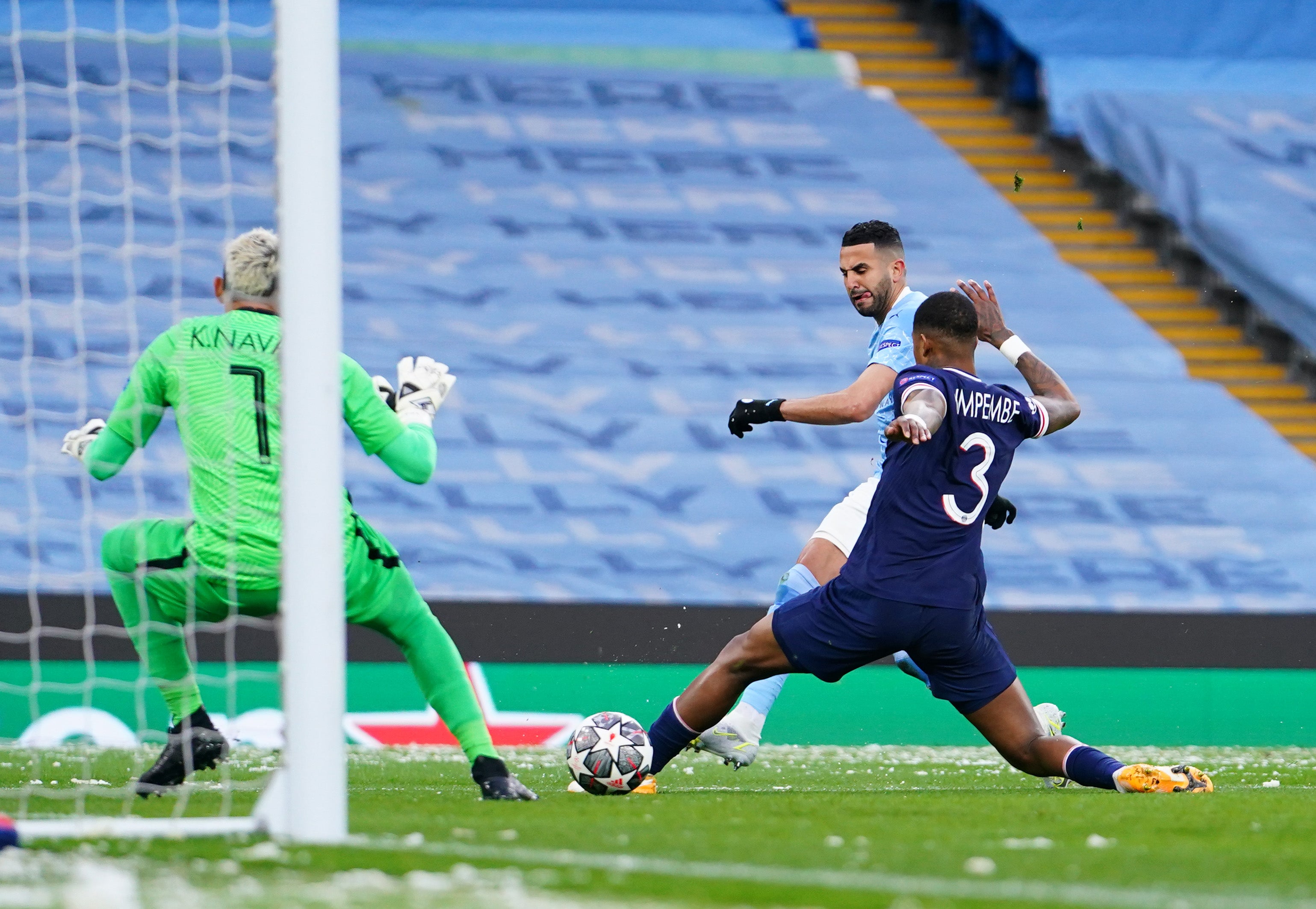 A response was inevitable. The opening goal of last week’s first leg will have momentarily flashed before Guardiola’s eyes when Marquinhos rose highest to meet a deep cross but PSG’s captain hit the crossbar on this occasion. Other than that, City’s last line of defence coped admirably with an attack that broke past the midfield pairing of Gundogan and Fernandinho too easily during the first half.

Zinchenko, John Stones and Ruben Dias were particularly impressive, throwing themselves in front of PSG’s attempts to reassert themselves on both sides of the half time whistle. One heroic Zinchenko block after Neymar’s mazy dribble through the lines prompted all three to celebrate as if they had scored a goal. They knew that as long as they held firm, PSG’s desperation for a goal would open space up on the break and opportunities would present themselves.

When it came, Mahrez took it. It was a stunning counter-attack, the type that City rarely get to execute given their dominance in possession, but they did not look out of practice. Starting in their own half, Kevin De Bruyne laid the ball off for Foden. A dribble and another one-two carried them to the edge of the penalty area, streets ahead of PSG’s retreating defence, who had ignored Mahrez’s free run at the far post. Foden picked him out for the simple finish.

As with the first leg, Pochettino’s players began to lose composure now that the contest had decidedly turned against them. Di Maria cost himself a possible appearance in the final but in truth, any prospect of that had already long gone. His stamp on Fernandinho while the City midfielder retrieved the ball for a throw-in was petulant in the extreme and spoke of a side losing their heads.

Perhaps all that was missing for City was a crowning moment. Foden, their boy wonder, thought he was about to provide it when his shot from the edge of the area on the break beat Navas but, alas, it struck the base of the far post. It would have been the ideal moment to cap off a historic night in this club’s history, their greatest in European competition outside of the 1970 Cup Winners’ Cup win. But of course, after this famous victory, their greatest night of all may be just around the corner.