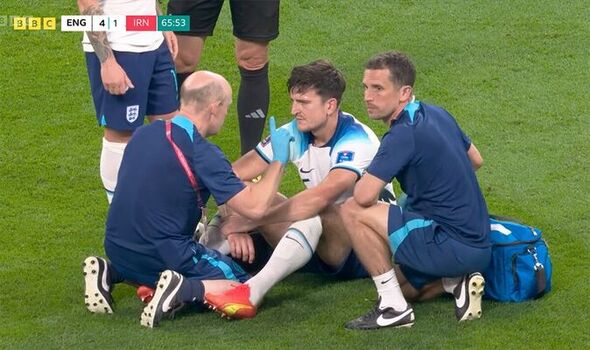 Harry Maguire was forced off with a suspected concussion during England’s World Cup clash with Iran. The Manchester United star appeared slightly unstable as he trudged off with the scoreline 4-1 to the Three Lions in their tournament opener.

Maguire sat on the Khalifa International Stadium turf just after the hour and was immediately tended to by England’s medical team. The physios could be seen conducting a concussion test, which is protocol in such scenarios.

It was not entirely clear how Maguire suffered the injury. He was treated for several minutes before being led off the pitch.

The 29-year-old was clearly very dazed as he chatted with staff. He then exchanged words with his replacement, Eric Dier, before heading straight down the tunnel.

BBC co-commentator Jermaine Jenas said: “He just doesn’t look right Harry Maguire, you can just see it in them, see it in their eyes.

“That first-half in particular he done really well, he takes on a world of pressure and for him to perform like that in both boxes, he can proud, hold his head high. It’s a step in the right direction.”

Maguire had been excellent in the first 70 minutes, with his passing out from defence prompting several attacks. He also struck the crossbar with a thumping header in the first half.