All the latest Liverpool transfer news, rumours and gossip in the 2021 winter window.

“Liverpool had looked at signing Napoli’s Serbia centre-back Nikola Maksimovic, but according to the club’s president Aurelio De Laurentiis, they were interested, but he had not heard anything back from them recently.”

Wijnaldum latest: ‘He wants to be paid what he’s worth’

“Klopp has to be very diplomatic. He is not going to start telling us exactly what is happening with the negotiations.

“What we do know is Wijnaldum wants to stay and Klopp also wants him to stay, but he is at the stage of his career where his contract runs out this summer and he knows big clubs in Italy and Barcelona are after him.

“And Liverpool also have to be careful in this economic climate when handing out contracts to players. What we are being told is a contract has been put in front of Wijnaldum, he has not signed it yet, he does not have to sign it, he is keeping his options open.

“But reading between the lines, Klopp wants him to stay. But as far as Wijnaldum is concerned, he needs to be paid what he believes he is worth.”

On January 7, Liverpool manager Jurgen Klopp said of Wijnaldum’s contract stalemate: “There’s really nothing to say. I think I’ve said everything about how much I like the person and the player. That’s not good or bad news, that’s just how it is. If there is a decision, you will know it.”

Klopp has also said a new centre-back is ‘not likely’ due to the coronavirus pandemic, but did not entirely rule out the possibility.

He told his pre-Aston Villa press conference: “I cannot say definitely we will not bring one in, it’s just not likely because of the situation in the world. We should not forget that the situation is a tough one for all people and for football clubs as well.

“There might be some clubs with absolutely no financial problems but this club is always very responsible with the things we do.

“If the world would have been in a normal place and the club was in the best possible situation, with three senior centre-halves plus Fabinho and Keita all injured, is that a situation where usually we would do something? Yes, definitely.

“But, we are not in that situation so I don’t know if something will happen or not. Maybe you could do something, but it’s wouldn’t be a short-term solution. That’s not right because it doesn’t help really.

“We have to deal with the situation, as we have done so far, and get through this. It’s not the best moment for the whole planet, so why should it be for a football club.”Liverpool’s priorities this window

Jamie Carragher has reiterated his belief Liverpool will be unable to regain the Premier League title unless they sign a centre-back this month.

Speaking after Liverpool’s 1-0 defeat at Southampton, in which Fabinho and Jordan Henderson played in defence, Carragher told Sky Sports: “The results Liverpool have had recently have nothing to do with them defensively. It’s going forward that is the problem.

“But l just think that it’s imperative Liverpool sign someone in January. Henderson isn’t a centre-back.

Transfer expert Fabrizio Romano provides an update on Liverpool’s transfer pursuits as part of a regular feature for the January transfer window.

“They are looking for opportunities. If something arrives, they will be ready to sign a new player but spending 60 or 70 million euros for players like (Dayot) Upamecano or this kind of centre-back is absolutely impossible in this window for Liverpool.

“If they will have a good opportunity, they will think about it in the next weeks. If not, I am sure Liverpool will stay with this squad.

“They will try to extend the contract of Virgil van Dijk. They are planning with him for the future so this year they will open negotiations to extend his contract and then next summer they will go for someone new.”

The latest players linked with a move to Liverpool

Dayot Upamecano – RB Leipzig CEO Oliver Mintzlaff has opened the door to a possible transfer for the centre-back after insisting the Bundesliga club will always consider selling their assets for the right price (SportBild, January 10). Sergio Ramos – Liverpool are eyeing a move for Ramos on a free transfer at the end of the season (Daily Star, January 8).

David Alaba – Liverpool have reportedly offered Alaba a £9m-a-year contract to beat Real Madrid to his transfer (Daily Express, January 7); Liverpool have made a last-ditch bid to hijack Real Madrid’s move for Alaba on a free transfer, according to reports (The Sun, January 6). 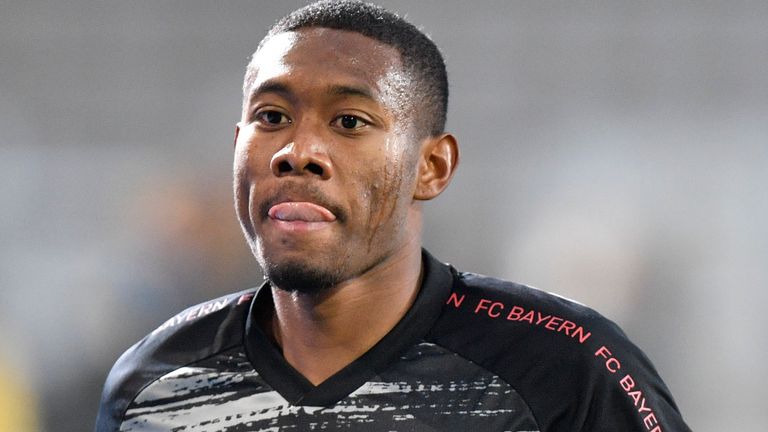 Gleison Bremer – The 23-year-old Brazilian defender currently playing at Torino is also attracting interest from the Reds, according to reports in Italy (Tuttosport, January 3).

Sven Botman – Botman is not a Liverpool target in January – despite links reporting the 20-year-old Schalke defender is wanted to add to the Reds’ injury-hit defence (January 4); Liverpool are reportedly in talks with Lille over a potential January move for central defender (Transfer Window Podcast via Daily Star, January 4).

Maximilian Wober – Jurgen Klopp’s search for a centre-back to help fill the void left by long-term injuries to Virgil van Dijk and Joe Gomez has seen him add the Red Bull Salzburg man to his apparent wishlist (Eurosport, January 1).

Kylian Mbappe – Liverpool are monitoring the PSG’s star’s contract situation. The French paper says Klopp’s side have been keen on the forward, whose deal runs out in 2022, “for many years” (L’Equipe, January 2).

Deals will be confirmed here.

The latest players linked with a Liverpool exit

Xherdan Shaqiri – The forward is likely to stay at Anfield until the end of the season as the club feels their hands are tied due to the coronavirus pandemic (Daily Star, January 6).

Georginio Wijnaldum – Talks over a new contract between the midfielder and Liverpool have reached a stalemate. A long-standing offer of a new deal remains on the table. But for now, the 30-year old Netherlands midfielder has not accepted it. Ronald Koeman remains keen to sign his compatriot, but as yet, that interest has not progressed into an official offer from Barca to either the player or Liverpool (Sky Sports News, January 6). Mohamed Salah – The Liverpool forward fuelled speculation about his long-term future when he admitted admiration for Barcelona and Real Madrid in a recent interview in Spain, calling them “two top clubs” (AS, December 19).

Deals will be confirmed here.

If reading on skysports.com, comment below to get involved in the debate, but please adhere to our House Rules

Mohamed Salah – Liverpool are said to have other priorities before agreeing a new contract for their star Egypt forward (Daily Star, January 9).

Georginio Wijnaldum – The Liverpool midfielder is now free to speak to foreign clubs and sign a pre-contract agreement. Ronald Koeman is hopeful of bringing his fellow Dutchman to Barcelona but Jurgen Klopp is pushing to Wijnaldum to stay (Sky Sports News, December 28).