Liverpool boss Jurgen Klopp should axe Diogo Jota from his starting XI against Manchester City on Sunday, according to Reds legend John Barnes. Jota scored a hat-trick in Tuesday’s 5-0 Champions League win over Atalanta. The Portugal international has now scored six goals in his last four appearances for the Reds.

The summer signing from Wolves is pushing for a starting spot in the Premier League side.

Roberto Firmino has scored just one goal in all competitions so far this season.

But Barnes says Sunday’s match may be a good one for Firmino to play and therefore doesn’t think there is a spot for Jota.

“Jota scored a hat-trick, but that doesn’t mean he automatically goes into the team against Man City,” Barnes told talkSPORT. 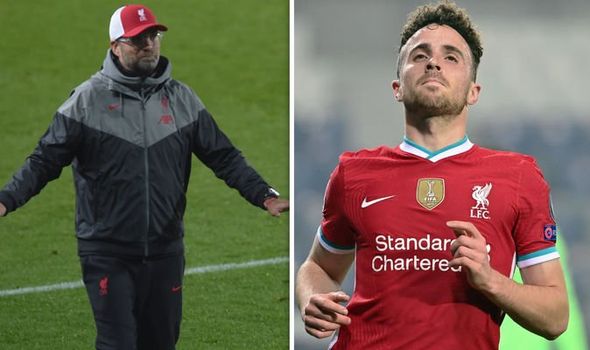 “I think who plays depends on what the games are and who they’re against and how that team plays.

“Against Man City, where you’re not going to have as much possession, maybe Firmino will be a better bet. You need a player like Bobby Firmino to not only get hold of the ball but also do his defensive work.

“If you’re playing a game against Atalanta or Leeds, a more open team, then you can see Jota coming in.

“It’s the same with Thiago, If you play Man City you won’t necessarily play Thiago, you play [Georginio] Wijnaldum, [Jordan] Henderson and Fabinho who are much stronger defensively.

“I think Klopp will chop and change this season, and I don’t think it’s a reflection on who he feels is better, it’s more about who they are playing against.

“The good thing about it is Jota and Thiago can now come into the team and take over from any of the players in midfield or up front and do a great job, and that’s what you want.”

Klopp leapt to the defence of Firmino following the Atalanta victory and Barnes has done the same.

He added: “Will Firmino’s lack of goals cost him? Well, the reason why [Sadio] Mane and [Mohamed] Salah score as many goals as they do is because of the way Bobby plays.

“Now, if Jota plays maybe Salah and Mane, although they both scored last night, might not score as many goals.

“So I don’t think goalscoring is necessarily what he’s in the team to do. As much as people may say, ‘Firmino is Liverpool’s main striker’, the main goalscorers are Mane and Salah and Firmino gives much more than that.

“If we can finish 20-odd points ahead of everyone else and he doesn’t score goals, I’ll be having that all day long, and so would Jurgen!”