Now that was baffling. The Premier League’s top goalscorer withdrawn from the fray with Liverpool desperately in need of a goal. Several shakes of the head from Mohamed Salah, confirmed Jurgen Klopp is playing a dangerous game.

The Liverpool boss is among the masters of man-management but this immediately felt like he was pressing the wrong button.

Irritating Salah, who has been one of few credible performers this season, is not the way to go when the club’s top-four hopes are in serious doubt.

His agent Ramy Abbas Issa was also evidently furious, as he tweeted a cryptic full stop to make his feelings known.

This game was there for the taking for Liverpool but they failed to ask any questions of Edouard Mendy, one of the most unconvincing goalkeepers in the division. 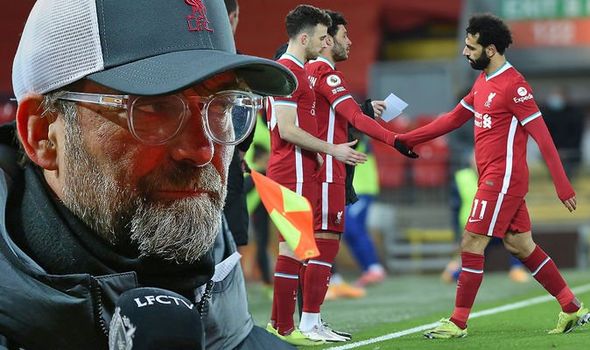 That was evident last Sunday against Manchester United, when the Senegal international failed to hold several shots despite keeping a clean sheet.

This was a toothless display from Liverpool that lacked everything Klopp has built his record-breaking side on.

The leadership and drive of Jordan Henderson was sorely missed once again but the injuries can no longer be an excuse.

Liverpool’s first-choice front three was still on the field but they really did look like an attack playing together for the first time.

Instead he missed the ball and is clearly sapped of all confidence. As he emerged for the second half, Klopp put an arm of encouragement around him.

It was clear Mane was left on the field in an attempt to play his way out of rough form. Roberto Firmino was also non-existent.

This was by no means Salah’s best performance of the season but he certainly always looked capable of making something happen.

He was bright and alert to loose balls, creating gaps whenever he was in possession.

Liverpool virtually surrendered defeat once he left the field in a quite frankly baffling double substition.

Curtis Jones, who was full of action once again, was also withdrawn as the returning Diogo Jota and Alex Oxlade-Chamberlain entered the fray.

The introduction of both was more than justified but Liverpool lost their verve once Salah and Jones departed.

Even when Salah is having an off day, he is capable of scoring out of nothing. No player in world football represents a bigger goal threat from the wide areas. 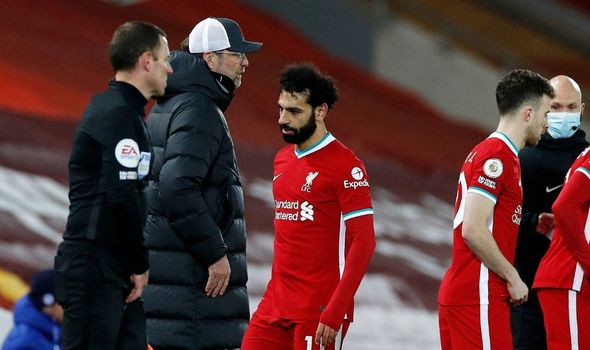 With Jota returning, Salah may feel like he could be the one to make way in the starting XI. In fact, he should be the first name on the team sheet.

We can expect Salah to be in the team from the off against Fulham on Sunday but tonight was an opportunity they could not afford to waste.

Chelsea are now four points clear of Liverpool, who have lost five consecutive home games. If there was one game to lose between now and the end of the season, this wasn’t it. This was win at all costs.

That means keeping Salah on the field, regardless of his performance. Mane and Firmino can count themselves lucky.

Would Salah want to stick around if Liverpool are playing Europa League football next season? It’s certainly not a given.