‘Playing like this, we have NO chance of winning the Champions League’: Livid Lionel Messi brands Barcelona ‘weak’ and hits out at boss Quique Setien’s tactics in an extraordinary post-match interview after Real Madrid reclaim LaLiga

Lionel Messi did not hold back after seeing Barcelona relinquish the LaLiga title on Thursday night, blasting his team for being ‘erratic and weak’ in a shock defeat at home to Osasuna.

The Barcelona captain, who seemed angry after scoring a brilliant free-kick during the match, was raging afterwards and said Barcelona’s performance level must improve quickly if they are to have a chance of winning the Champions League.

Real Madrid clinched the title by beating Villarreal 2-1 but would have lifted the trophy regardless of that result, after Barca slumped to defeat against an Osasuna side that finished with 10 men – and Messi unleashed his anger in a rare post-match interview. 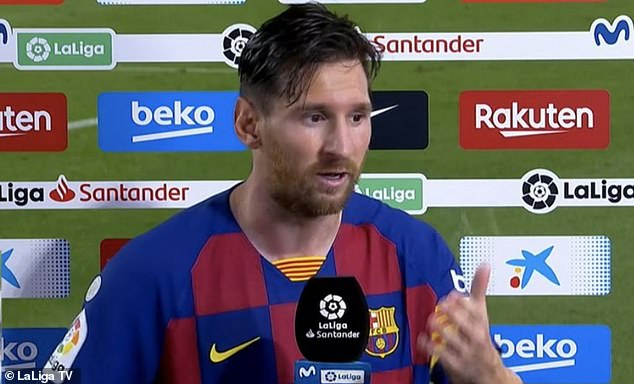 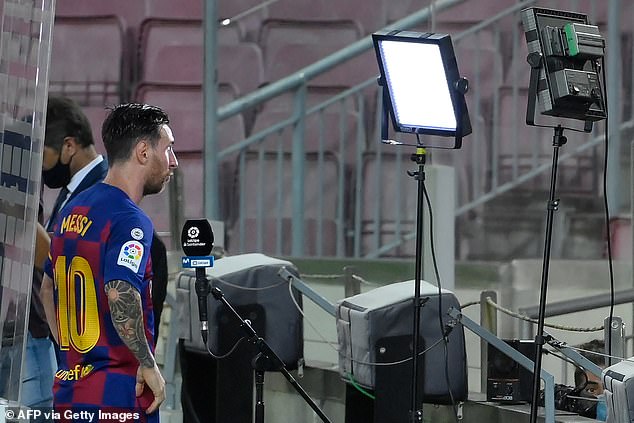 ‘This game represents the entire year. We have been an erratic and weak team,’ Messi said in the TV interview, just after the final whistle sounded at an empty Nou Camp.

‘Madrid did its part by winning all its matches, which is impressive, but we also helped them to win this league. We have to be critical of how we have played, starting with the players, and the rest of the club.

‘We have lost because of our mistakes and not because of Madrid’s successes, as many say.

‘The feeling on this team is that it tries, but that it cannot get the job done. Today in the first half they were better than we were and it seems we have to fall behind to react like we tried to do in the second half.’

In a nod towards under-pressure manager Quique Setien, Messi added: ‘We are going to have to change a lot if we want to do something…’ 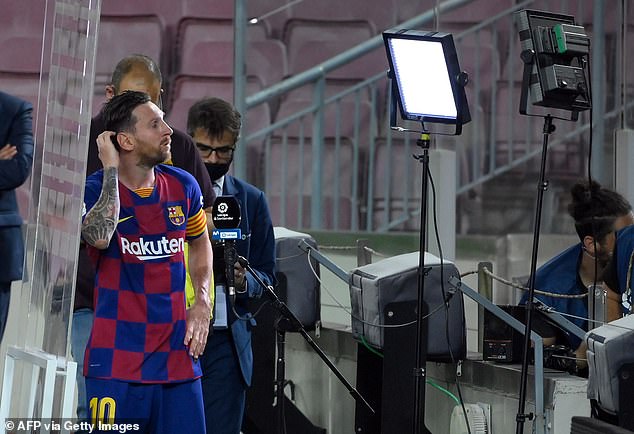 Messi was exasperated after the game, saying Barcelona ‘try… but cannot get the job done’ 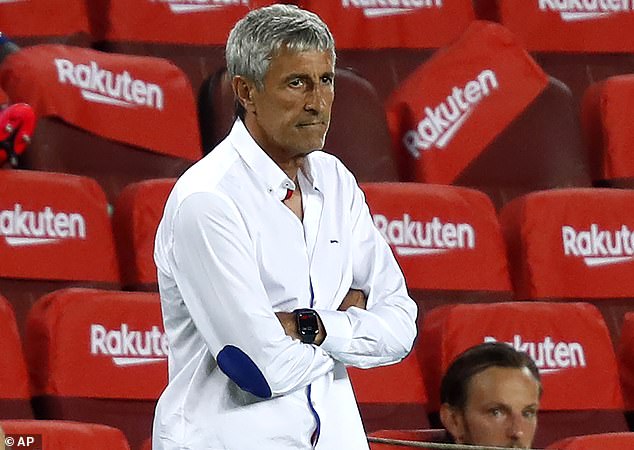 Barcelona led the league by two points over Madrid when the league was stopped in mid-March for three months, yet Madrid returned motivated and in shape, reeling off 10 straight wins.

Barcelona, on the other hand, have looked flat, drew three matches to lose the lead and on Thursday hit a new low when the Catalans lost their first home match since November 2018.

Messi scored his league-leading 23rd goal from a free-kick in the second half, to cancel out Jose Arnaiz’s opener, but refused to celebrate and waved his arm in the air in anger. 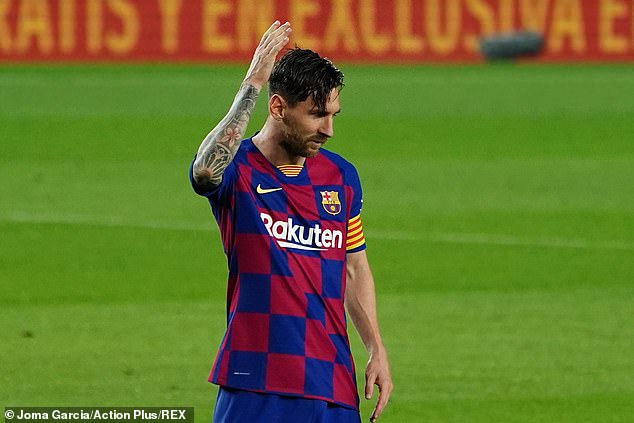 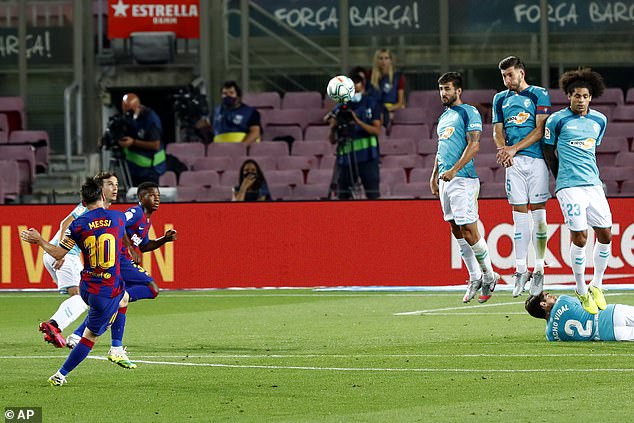 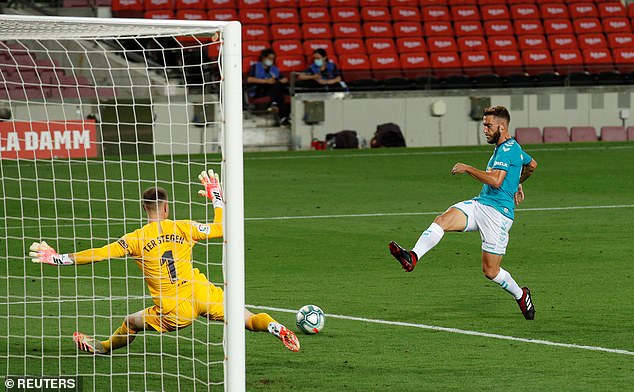 Barcelona then had an extra man advantage when the visitors lost substitute Enric Gallego to a straight red car, for bloodying the mouth of Clement Lenglet with an elbow to the face in the 77th minute.

But Osasuna’s Roberto Torres scored the winner in stoppage time, with Barcelona pushing forward in search of a late goal.

‘I said it some time ago, that playing like this we had no chance of winning the Champions League, and it turns out we didn’t even have enough to win LaLiga,’ Messi said.

‘We need to take a breather, let some air in, and clean out minds of all that has happened since December.’ 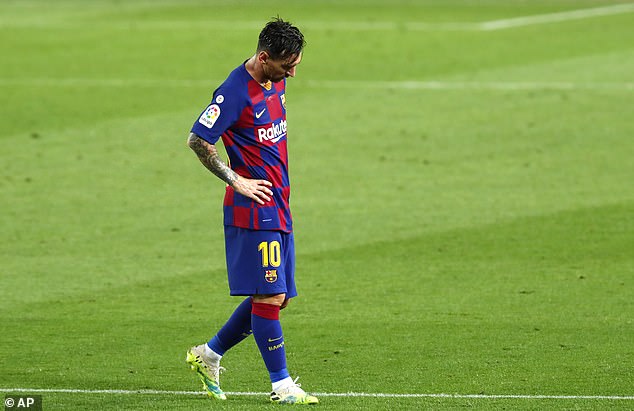 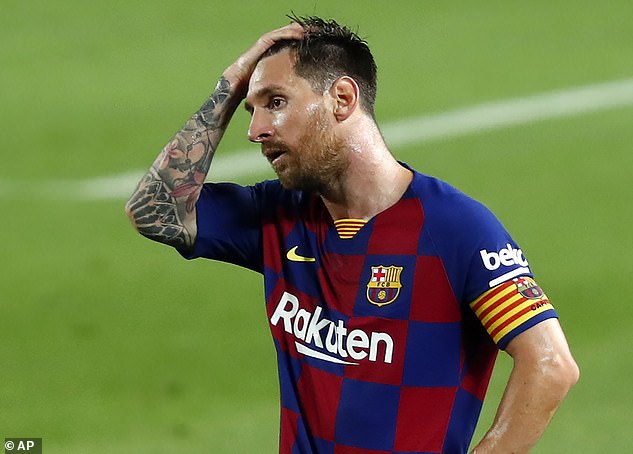 Messi stated that ‘playing like this, we will lose to Napoli’ in their Champions League R16 match

Barcelona must regroup for the second leg of its Champions League round-of-16 match against Napoli on August 8 – the first leg finished 1-1 in Italy.

‘Playing like this we will lose against Napoli,’ Messi boldly stated.

‘We have to start from zero in the Champions League and blame ourselves for what went wrong.’