Tate Russell credits his father for teaching him one of the most important things he’s learnt about how to make it in professional sport: mentality matters, more than anything else.

“You can have all the talent in the world but if you’re not going to work hard, there’s no point,” the Western Sydney Wanderers defender said. 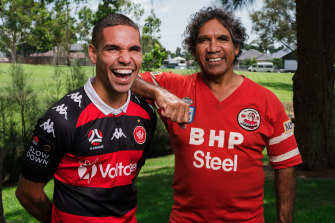 His old man would know – Ian Russell played 127 matches for the Illawarra Steelers and North Queensland Cowboys across the ’80s and ’90s. He was named the Dally M Lock of the Year in 1992.

So on the eve of the new A-League campaign, Tate, 21, decided it was time to show his appreciation to his dad for all his advice over the years, in his own quiet way.

Last year, Tate wore jersey No.33 for the Wanderers. This season, thanks to his emergence as a first-team player of serious promise, he actually had a choice.

The number he wanted was initially taken by one of Tate’s best mates, centre-back Tass Mourdoukoutas. But then Matthew Jurman left to join Greek club Xanthi FC, and Mourdoukoutas took his old No.6. 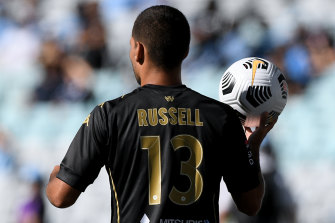 Tate Russell’s jersey number this season is a nod to his dad’s rugby league career.Credit:Getty

That freed up 13 – the same number Ian wore for most of his rugby league career as a lock forward.

“The old man wore it, so I thought it’d be a good idea to wear it as well, and hopefully try and keep it throughout my career now,” Tate said.

“I didn’t tell him. He actually found out in the first game when he was watching. Afterwards he said, ‘I like the jersey number’ – just a subtle text about it, and that was it.”

Back home on the South Coast, Ian was beaming with pride as he tuned into Western Sydney’s season opener from the couch.

It’s not the only way Tate is upholding family tradition. The round ball was also his dad’s first love: Ian played until he was 18 years old and was selected for the NSW country championships at that age, but switched to rugby league because it was the sport his mates and two eldest brothers played.

History would suggest it wasn’t a bad call. 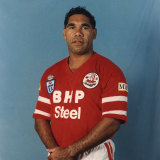 Ian Russell, back in the glory days.Credit:Fairfax

“But soccer’s always been in the back of my mind,” Ian said. “To see your kids play it, it’s even better.”

Ian’s later years with the Steelers and Cowboys were ravaged by injury, and the heavy toll rugby league took on his body was one of the main reasons he never encouraged Tate – who was born the year he retired – to follow in his footsteps.

“Over the years, like now, I’m feeling it – because of arthritis and everything,” he said. “For my young bloke I was thinking about that more than anything … getting hurt, sitting in hospital, seeing other kids with sore shoulders and stuff like that, injuries, concussion – that’s the biggest thing coming around now.”

Ian now seems to live vicariously through Tate, who is enjoying the career in football he never had, and can guide him as he faces the same peaks and troughs he once did in a different code.

So far, so good – his son has become one of the A-League’s best right-sided defenders this season, one of Western Sydney’s best attacking outlets, and has signed a new two-year senior contract with the club, the Herald can reveal.

“It’s been a good season so far for me,” Tate said. “Hopefully I can keep going that way and build on my performances in the next couple of years, being a young player, and especially with that Olympic squad and all of those things coming up – it’s a big year for me.”

A spot in the Olyroos team for the Tokyo Games appears a near-certainty, while the Socceroos – who could do with some more depth at right-back – loom as a long-term ambition.

He sees similarities in his game with Bayern Munich’s Canadian star Alphonso Davies, another attack-minded fullback of a similar age, and is hopeful of one day hitting similar heights at club level – but only once he has enough runs on the board with the Wanderers, who face embattled Melbourne Victory at home on Friday night.

There is someone at the club who could perhaps help with that, and it’s not lost on Russell; Carl Robinson once coached Davies at Major League Soccer side Vancouver Whitecaps, and helped turn him from a skinny teenager into one of the world’s most promising left-backs before his $19m transfer to Bayern in January 2019.

“I’m maybe not as quick but I’m definitely the same kind of player,” Russell said of Davies. “I haven’t had too big of a chat with [Robinson] about him but definitely, I knew straight away about him, especially when I was keeping tabs on what Davies was doing.”

For now, Russell is keeping a narrow focus, and trying to put the lessons from his old man into practice in the A-League.

“Dad’s always loved football,” Tate said. “We have memories of being up early watching Premier League games and stuff like that, as well as him or Mum taking me to training when I was starting out at the Wanderers – getting up at 4.30am, travelling all the way from Wollongong up to Sydney for 7am training.

“It was a bit intense, but I got used to it in the end. All that sacrifice has paid off.”