Leeds’ skilful winger Raphinha is becoming more influential by the game… the £17m summer signing has put in more crosses than Raheem Sterling this season and after being linked with a move to Liverpool, can the Brazilian transform their attack?

Leeds are certainly making up for lost time. After 16 years away from the big time they have seized their opportunity in the Premier League.

Patrick Bamford, Kalvin Phillips, Jack Harrison and Co have all stepped up to the challenge as Marcelo Bielsa’s entertaining style of football has offered a new dimension to England’s top flight.

But it has been one of their summer signings that has caught the eye in recent weeks – 24-year-old winger Raphinha. 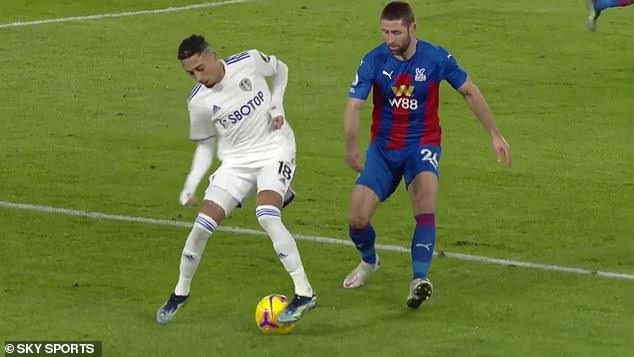 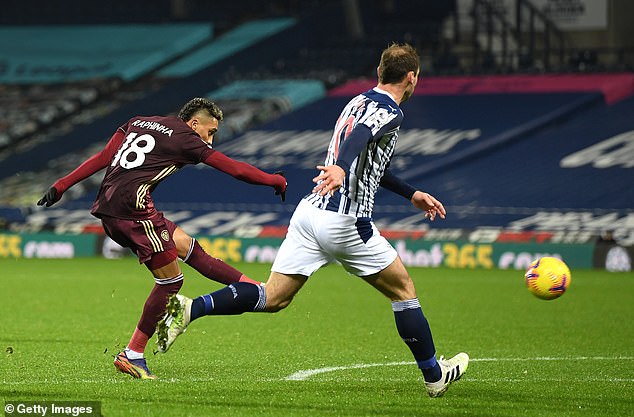 It might have been expected that fellow summer recruit Rodrigo would have been the one stealing the headlines at Elland Road this season after joining for a club-record fee of £26million from LaLiga outfit Valencia last August.

But as the Spanish striker has failed to make his mark Brazilian wideman Raphinha has certainly snatched his chance following his £17m summer switch from Rennes.

In his last four league games he’s scored two and supplied two assists as he’s missed just 10 minutes of football with Leeds securing three victories. He had the same return from his first 13 Premier League matches.

Raphinha was the standout performer in Leeds’ 2-0 win over Crystal Palace earlier this week.

Bamford’s 100th career goal came off the back of the winger’s fierce left-foot drive while he sent fans wild when he nutmegged Gary Cahill with an exquisite piece of skill.

Raphinha spun the defender by backheeling the ball through his legs, only to be hauled down by the Palace man on the edge of the box. The winger is becoming more and more influential by the week. 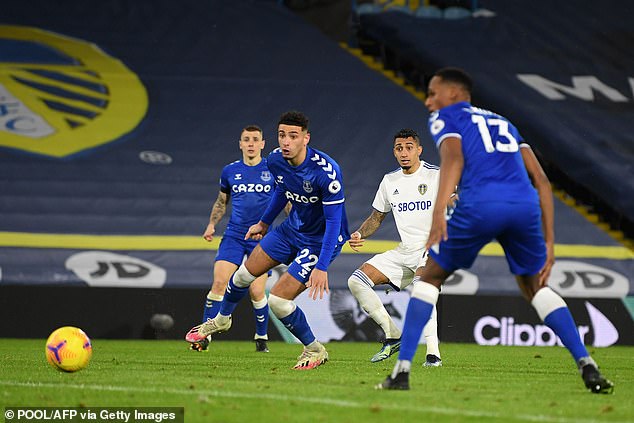 After joining on transfer deadline day in October the talented and tricky forward had two weeks, courtesy of an international break, to get up to speed with Bielsa’s demanding philosophy.

He was afforded the time to adapt, playing just 15 minutes in his first three Premier League games but since then he’s made 14 starts, nailing down his place on the right side of Leeds’ exciting attack.

His impressive displays have attracted the attention of champions Liverpool with reports this week linking them to a summer move for the Brazilian.

Bamford expressed his first impressions of his team-mate and admitted his shock that no top clubs were in the race to sign him last year. But it hasn’t taken long for them to launch a pursuit. 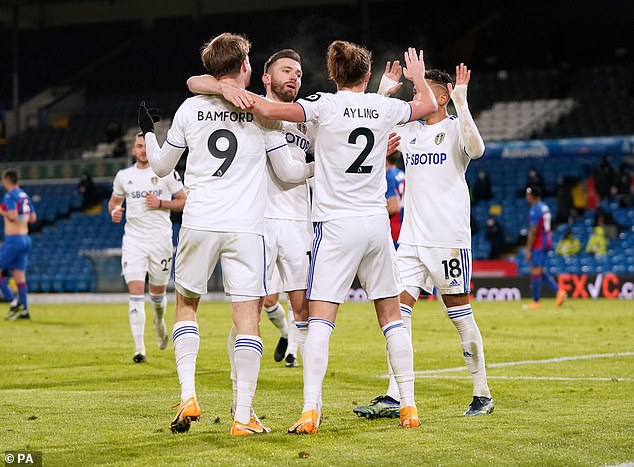 ‘Raphinha is brilliant,’ he told Sky Sports. ‘I think, to be honest, he has been a steal for Leeds. I am surprised.

‘As soon as he came in, you saw him in training, you know sometimes with players whether they are good or they are top class, and he really was. He stood out straightaway.

‘I am surprised that bigger teams, more established Premier League teams I should say, haven’t taken a punt on him because he really is someone special, and he is young.’ 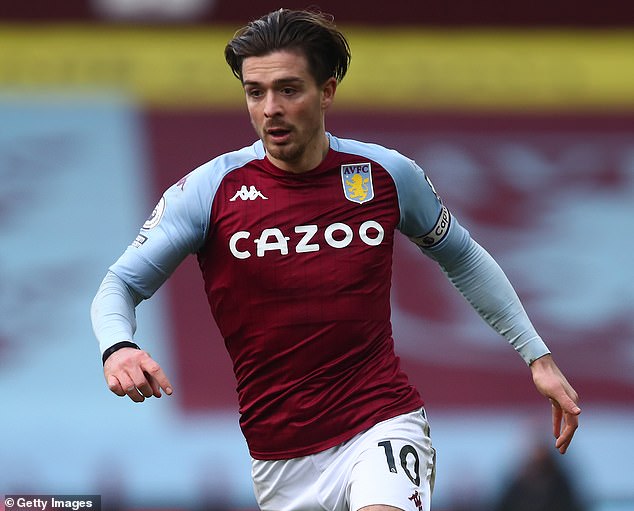 ‘You see that shot there [before Bamford’s goal], that’s so typical of a wide man, that penetrating run that we talk about with [Mohamed] Salah, [Sadio] Mane and [Raheem] Sterling, all the great wide players. They make that run and he does. He has great quality on the ball,’ Carragher said on Sky Sports’ Monday Night Football.

‘I think we mentioned before the game that he’s been involved in seven goals in the last eight games, so he’s always a huge threat and that’s always telling when your team-mates know from one training session.’

While his minutes per goal involvement is also better than that of Mane, Mahrez, Hudson-Odoi and Pepe. 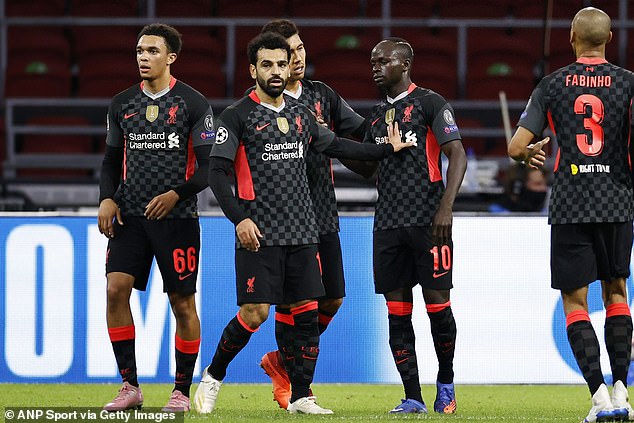 Prior to this season Liverpool have been overly reliant on Mane, Salah and Roberto Firmino but did bring in cover last summer and former Wolves man Diogo Jota hit the ground running before suffering a knee injury.

Liverpool’s lethal attack has not been firing on all cylinders this campaign and last month Carragher said that his former side will have to split up their lethal trio soon.

‘They are all getting to their late 20s and sooner or later that front three will have to be broken up,’ he said on Sky Sports.

‘You can’t, in two years’ time, say “we’re going to buy a new front three” and replace them all. It will change over time.’

Liverpool have been linked with pacey Wolves winger Adama Traore in the past but Raphinha has put himself in the frame to be part of the transformation at Anfield.

The signing of Takumi Minamino has not had the desired effect while Leeds’ talented wideman has made an instant impact in his debut season in England.

Raphinha, who’s played in the Europa League with Vitoria, Sporting Lisbon and Rennes, has wasted no time and grasped his moment on the biggest stage of all. 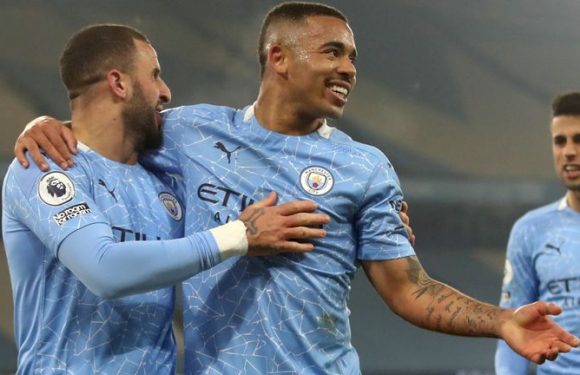