Free-scoring Georginio Wijnaldum has almost matched legendary Marco van Basten’s record for Holland and is adored by Jurgen Klopp… despite a contract stand-off, the Dutchman can be the saviour for injury-ravaged Liverpool in the absence of Thiago

For some players in the world of elite level football it is quite easy for a quality player to go under appreciated.

The last 18 months have been something of a whirlwind for the 30-year-old, who has become both a European and Premier League champion while preparing to enter the peak years of his career… yet uncertainty looms large. 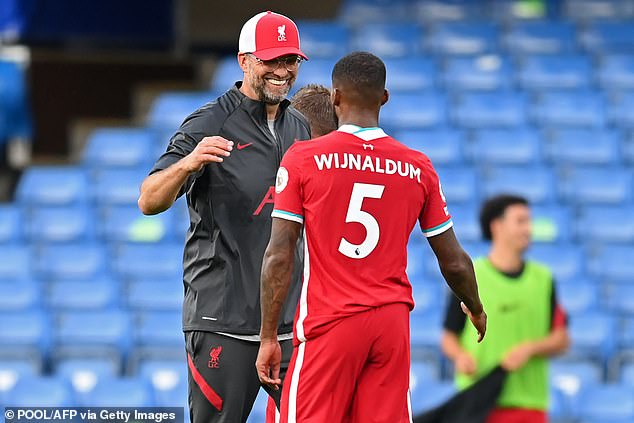 Jurgen Klopp has never made secret of his infatuation with Wijnaldum and the wide repertoire he brings to Liverpool’s red juggernaut, but the elephant in the Anfield boardroom still to this day remains the player’s rapidly dwindling contract.

Right now, however, all such talk can be swiftly placed aside.

It’s business time for Liverpool and Klopp and Co find themselves very much in the thick of a severe injury crisis.

With a depleted defensive line and players dropping like flies in midfield, Wijnaldum needs to answer the call for the reigning champions, starting with a crunch table-topping showdown with Leicester City on Sunday.

One bugbear for many Liverpool fans is seeing Wijnaldum perform like a completely different player on the international scene.

A quick scroll of social media following a Holland match can often turn up disgruntled supporters questioning why the 30-year-old looks like a different player wearing the famous orange shirt of his country. 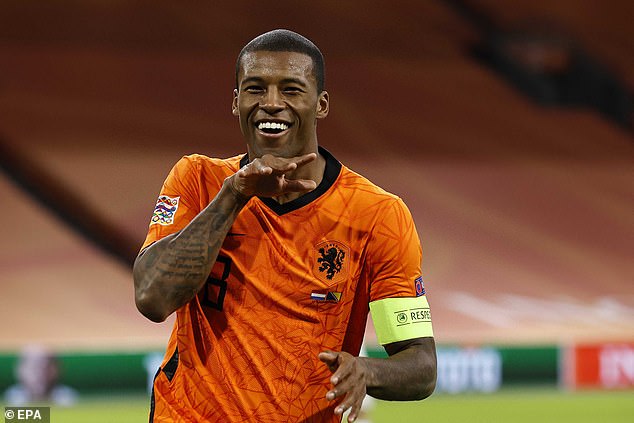 What this really is, however, is testament to the versatility of the midfielder. Wijnaldum displays an unwavering ability to adjust himself to a given role, and the task handed to him with Holland differs greatly to his weekly duties at Anfield.

This week Wijnaldum stole the show, scoring twice inside seven minutes during Holland’s 3-1 victory over Bosnia and Herzegovina before hitting an 84th minute winner against Poland in a 2-1 smash-and-grab days later.

He now has a hugely impressive 13 goals in his last 20 outings for Holland.

The advanced position given to him with the national side gives Wijnaldum greater attacking freedom and the Liverpool man provides the goods as a result.

Quite remarkably, Wijnaldum has now hit the 20-goal mark for his country and sits just four goals behind the record of Dutch legend Marco van Basten.

The legs may be a little heavy after an international slog but such form can only bode well for Liverpool, at a time when Klopp need’s Wijnaldum firing on all cylinders. 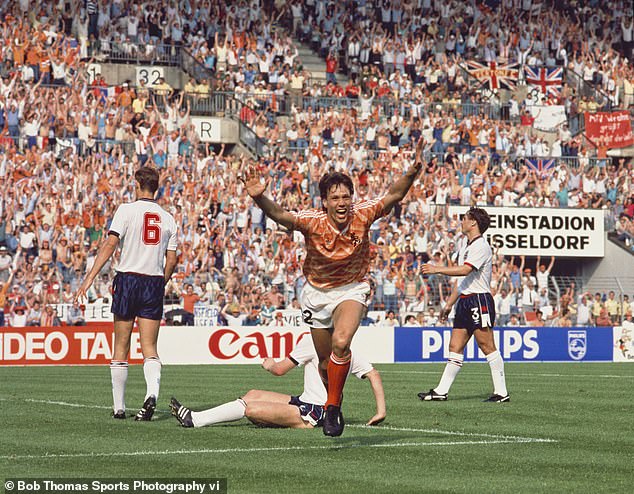 And so it’s back to Merseyside for Wijnaldum and back to a role which largely sees him go under the radar.

Filling the job description of the lesser seen man can often by a thankless task in football, but all those around Wijnaldum at Anfield appreciate how much of a key cog he is in Liverpool’s system.

Using his surprising levels of strength and artistic footwork, Wijnaldum is able to fulfill a unique role for Liverpool.

With lung-bursting fitness levels, Wijnaldum carries out a duty for the Reds which sees him harrying opponents, breaking up play and rapidly turning over possession to ignite a counter-press. 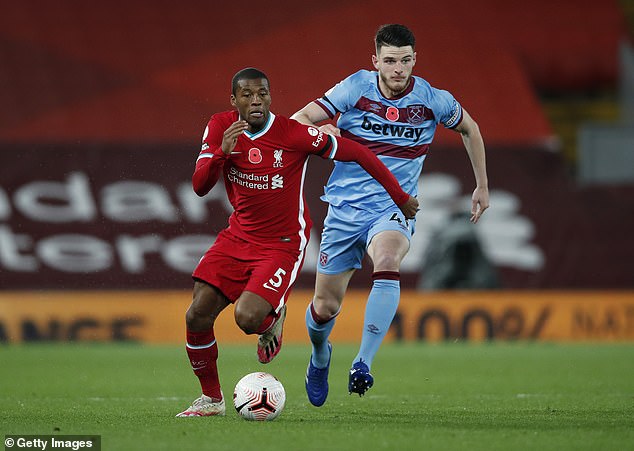 It’s perhaps safe to say that without these boxes being ticked, Klopp’s team does not operate as intended. It is no mere coincidence that the German fielded Wijnaldum more than any other midfielder last season as Liverpool stormed to the title.

And now Wijnaldum must slot into his trusted role once more, this time with even higher levels of expectation given the dwindling numbers around him.

At present several Liverpool players are facing a desperate race to be fit in time for the showdown with the Foxes on Sunday.

Wijnaldum may yet find himself in a very makeshift midfield, with those players who have managed to avoid the treatment room being hauled out of position as a result.

Klopp is sweating on the fitness of his Brazilian enforcer Fabinho, though the former Monaco man is highly likely to be placed straight back into defence to ease the back-line crisis, should he be given the green light to play. 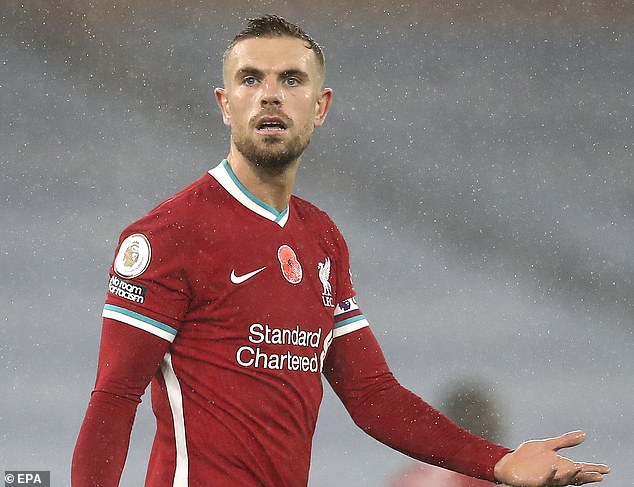 All eyes therefore turn to Wijnaldum in the midfield, particularly with captain Jordan Henderson facing his own battle to be fit in time.

Henderson became the latest in a long string of players to be hit by injury during the international break.

The Liverpool skipper has sustained a groin problem while on duty with England, and has returned to Merseyside as a result.

Henderson’s potential absence on Sunday points to a midfield likely to contain Wijnaldum alongside Curtis Jones and James Milner – though the latter is now widely expected to be drafted into a position of defensive cover.

Wijnaldum, therefore, will be both Liverpool’s most experienced midfielder and talisman in the middle of the park, going up against the in-form pairing of Youri Tielemans and Nampalys in the blue of Leicester.

The absence of summer signing Thiago means Liverpool are also pressed into asking Wijnaldum to provide something of a creative outlet, while also providing a foil for the likes of Jones or Takumi Minamino to initiate attacks from the middle.

All this has so far passed by without mention that this could very likely be Wijnaldum’s final season at Anfield wearing the famous Liverpool shirt.

In just a matter of weeks the Dutchman is able to open negotiations with European clubs regarding a free transfer in the summer.

Barcelona boss Ronald Koeman, who managed Wijnaldum on the international scene with Holland, has made no secret of his desire to secure a deal for his countryman.

Wijnaldum’s contract has frittered away and both club and player have hit a stalemate when it comes to negotiations.

It is no secret that Klopp would love to keep one of his most versatile lieutenants at the club, especially with Liverpool competing on multiple fronts, season after season.

Yet the main bone of contention is the system in place at Anfield, which dictates that lengthy and lucrative contracts are not handed out to aging members of the squad. 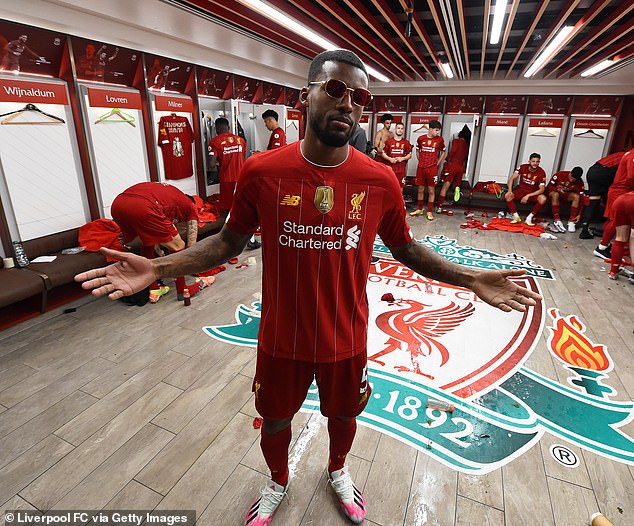 With his contract expiring in the summer, this could likely be Wijnaldum’s swansong at Anfield

Wijnaldum is now at the peak of his game and, being set to turn 31 next year, is unlikely to continue to be part of Klopp’s parts at such a frequent rate in the coming years.

Many expected Wijnaldum to depart in the summer window just gone, particularly after the club secured the capture of Thiago from Bayern Munich.

But Wijnaldum remained, and has picked up where he left off last season with a string of solid, consistent displays.

Whether this is to be Wijnaldum’s final Liverpool season or not, it is unlikely his team have ever needed him more than now.

After a week spent reeling in the record of one of Holland’s all-time heroes, it’s time for Wijnaldum to don the cape for Liverpool and save his club at a crucial juncture.