The Matildas’ hopes of reaching the second round of the Olympics have suffered a major setback after they slumped to a 4-2 loss to Sweden, with Sam Kerr missing a crucial second-half penalty.

Australia’s captain was on course for a hat-trick when she was handed a chance to draw level at 3-3 from the spot, but had her attempt saved by Sweden goalkeeper Hedvig Lindahl in the defeat in Saitama. While it was a bitter moment for the star striker, she was all that prevented the Matildas from being on the end of a thrashing as they were comfortably outplayed by the rampant Scandinavians. 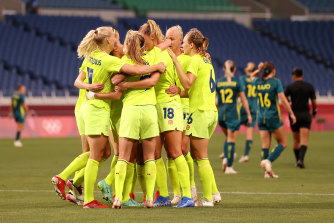 Sweden celebrate one of their four goals.Credit:Getty Images

Kerr scored twice before missing from the spot but could do little to improve her team’s porous defending that was reminiscent of their form in friendly games under the guidance of coach Tony Gustavsson.

After an improved performance against New Zealand on Wednesday, he gambled with a tactical switch of defender Steph Catley on to the wings with midfielder Aivi Luik deployed in central defence. The change took 20 minutes to fall through as Sweden capitalised on the vacant space and indecision between the pair. On a counter-attack, Sofia Jakobssen crossed to Fridalina Rolfo who struck a composed finish to put Sweden into the lead.

Australia had struggled to create any meaningful chances within the first half-hour, too often resorting to long balls and direct attacks. However, a moment of brilliance from captain Kerr clawed Australia back into the contest. Her 33rd-minute header had just enough power to beat the palm of Lindahl and trickle over the line to make it 1-1. Minutes later, she thought she would create a chance to put Australia into the lead when she was fouled in the box but the referee waved away Kerr’s claim for a penalty.

Whatever Gustavsson said at half-time sparked an immediate response. Australia’s first constructed attack gave them the lead. A clever cross to the far post from Caitlin Foord found Kerr, who nodded the ball into an empty net to make it 2-1. 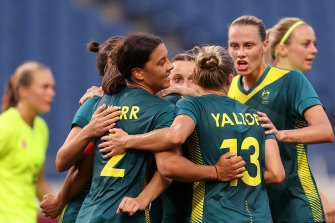 Sam Kerr was on target twice for the Matildas but missed a penalty.Credit:Getty Images

However, the defensive frailties remained. Yet another counter-attack exposed Australia’s weak backline. Jakobssen beat Luik in a foot race to square the ball to striker Lina Hurtig ,who made no mistake from close range, rattling the net to draw level in the 52nd minute.

Just after the hour, it got even worse for Australia. Rolfo let fly with a powerful shot from distance that flew past the fingertips of goalkeeper Teagan Micah and into the corner of the net to restore Sweden's lead.

The Matildas’ fightback didn’t diminish and in the 67th minute, they were thrown a lifeline. A foul on Foord inside the box was awarded a penalty after the intervention of the VAR, giving Kerr a chance to draw level with her hat-trick. But she was denied by an outstanding reaction from goalkeeper Lindahl, who blocked the shot with her feet to keep Sweden’s lead in tact. With eight minutes to go, the result was put to rest. A glancing header by Stina Blackstenius made it 4-2 to seal Sweden’s win.