It was an almighty task for Karim Benzema to step into Cristiano Ronaldo’s scoring shoes, but the striker has proven that he is now Real Madrid’s main man and has Liverpool in his sights again ahead of the Champions League quarter-finals.

It has been an out-of-sorts season for a club so used to winning the big trophies. In recent years, Real Madrid have won three successive Champions League titles – the first team to do so in the competition and the first in the European Cup overall since AC Milan in the 1980s. They also won La Liga last season for a record-extending 34th time.

But there have been some uncharacteristically poor results this time around. In La Liga, Real have been beaten by Cadiz and Levante, as well as damaging draws to Osasuna and Elche. There were also two defeats to Shakhtar Donetsk in the Champions League group stage. Real eventually topped Group B but with only ten points from a possible 18.

Perhaps the most shocking result came in the Copa del Rey in January. The 19-time winners were beaten by Spanish third division side Alcoyano and knocked out at the third-round stage, despite fielding five Champions League winners in their starting XI.

But since the start of February, Real Madrid are unbeaten in their 11 games in all competitions, drawing just twice. And in seven of the eight games in which Benzema has featured in that run, he has found the back of the net. 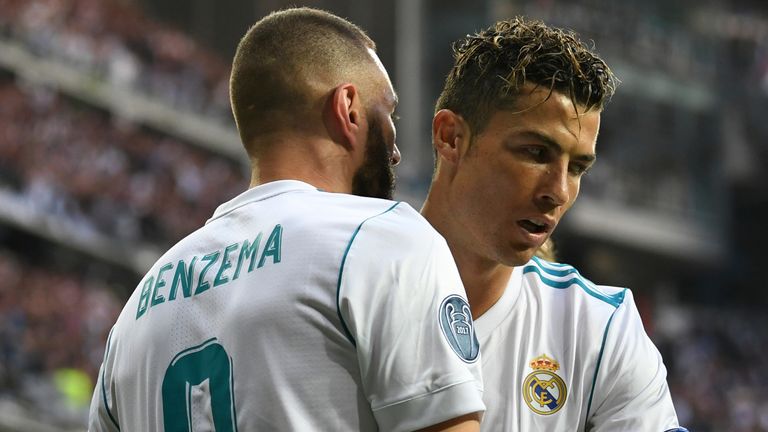 It’s not surprising that Benzema’s goalscoring numbers have rocketed since Ronaldo’s departure. In the Portuguese’s last two seasons in Madrid, Benzema failed to reach 20 goals in all competitions, only netting 12 in the 2017/18 season.

But let’s not underestimate the importance of Benzema to Ronaldo’s superstardom at Real.

“When Ronaldo was at Real Madrid, Benzema was very much the support man and in a way, he embraced that role as the fall guy,” AFP’s Spain sports correspondent, Tom Allnutt, told Sky Sports.

“When he first came to Real Madrid, he was very much a goalscorer – a down the middle No 10 kind of player – and he has to adjust his game to suit Ronaldo. Often when you watch Real Madrid, he’ll be the one running the runs down the channels, down the sides and make space for Ronaldo down the middle. He’d be the one making the pass to him, he’d be doing the pressing when Ronaldo was perhaps was be saving his legs.

“Very quickly, Benzema realised that to endure at Real Madrid with Ronaldo, he had to become that player. In a way, it’s a testament to him as an all-around player that he was able to do that.

“I think it’s also true that for the majority of Benzema’s career, he’s very much been very much in the shadow of Ronaldo and not only in terms of his performances, but also in terms of his numbers and he’s definitely sacrificed a lot. In a way, he’s been a victim of Ronaldo’s brilliance, like many other strikers have been in the last ten years.

“One of the things with Benzema that people outside of Spain don’t realise perhaps is that he is very gifted footballer in his all-around game.

“He’s an extremely good finisher, but he also defends, he runs, he presses, he can play very well on the break, he often plays the final pass in Real Madrid’s counter-attacks, and technically he’s very strong. It’s a tribute to how good of an all-around player he is that he could adjust his role.” 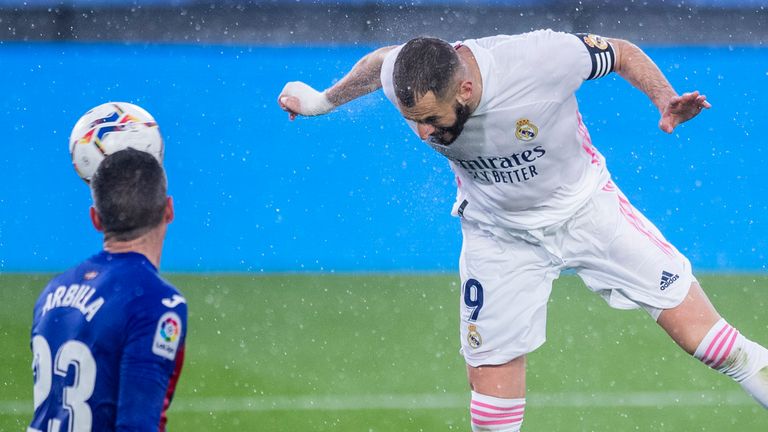 He followed this up with 27 goals in 48 games the following year. So far this term, he has 24 goals in 33 games and is on course for his best-ever season. Benzema has also scored nine goals in his last seven outings in all competitions.

At the age of 33, Benzema may not be Ronaldo’s long-term successor at Real Madrid, but he is certainly their most important player right now.

Allnutt explained: “When Ronaldo left, there was a lot of talk about who was going to step up, who was going to fill those shoes? People talked about Gareth Bale and eventually Eden Hazard arrived at great expense from Chelsea, even some other players like Marco Asensio and youngsters like Rodrigo and Vincius Jr.

“People were hoping that in time they would be able to fill Ronaldo shoes and contribute to that. But to be honest, in the main, it is only really Benzema who has stepped up.

“Benzema has done everything that was asked of him. Everyone was hoping he would score more goals, make more assists and there’s no doubting that he’s done that. And it’s not an exaggeration to say that he’s one of the best out-and-out strikers in the world. 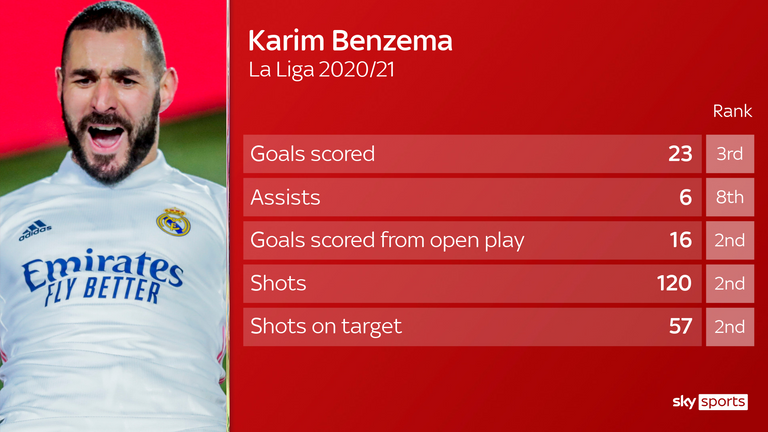 “The real question is who contributes as much as Benzema in the Real Madrid team? This season, there have been questions asked – especially in recent week – of is Benzema carrying Real Madrid.

“There was a time for two or three weeks where he scored a late equaliser against Atletico Madrid, he scored two late goals against Eibar when Real Madrid came from 1-0 down to win 2-1. It felt like almost every week, he was bailing them out of trouble.

“He very much brushed aside the suggestion and I think it would be unfair because there are other key players as well – Luke Modric, Casemiro, Toni Kroos, Sergio Ramos.

“But I think it is a fair argument that apart from Casemiro – because Real Madrid don’t really have another defensive midfielder in their squad – I don’t think there’s another player Real Madrid would miss more if they were out.

“In a way, Benzema and Casemiro are Real Madrid’s irreplaceable players and it remains to be seen if they’re able to bring someone in to provide more cover for him.”

Quietly creeping into the record books When Ronaldo or Lionel Messi make or break a record, it is met with great fanfare and rightly so. But Benzema has been quietly going about his business on the field for many years and has written his own name into a few of those lists.

He is fifth in Real Madrid’s all-time top goalscorers list (273 goals) and fourth-placed Santillana’s 290 goal tally is easily within his reach. Benzema could even surpass the greats Alfredo Di Stefano (308) or Raul (323) by the end of his Real Madrid career.

Benzema also ranks as the fifth highest scorer in Champions League history with 70 goals. He is just one of five players to have reached the milestone, joining illustrious company in Ronaldo, Messi, Raul and Bayern Munich’s Robert Lewandowski.

Allnutt told Sky Sports: “In the current statistics this year in terms of goals, he’s right up there with Robert Lewandowski, Erling Haaland, Kylian Mbappe, Messi – he’s very much in that group. Whether or not you think over his career he deserves to be is a different debate, but on current form, I think he’s very much there. 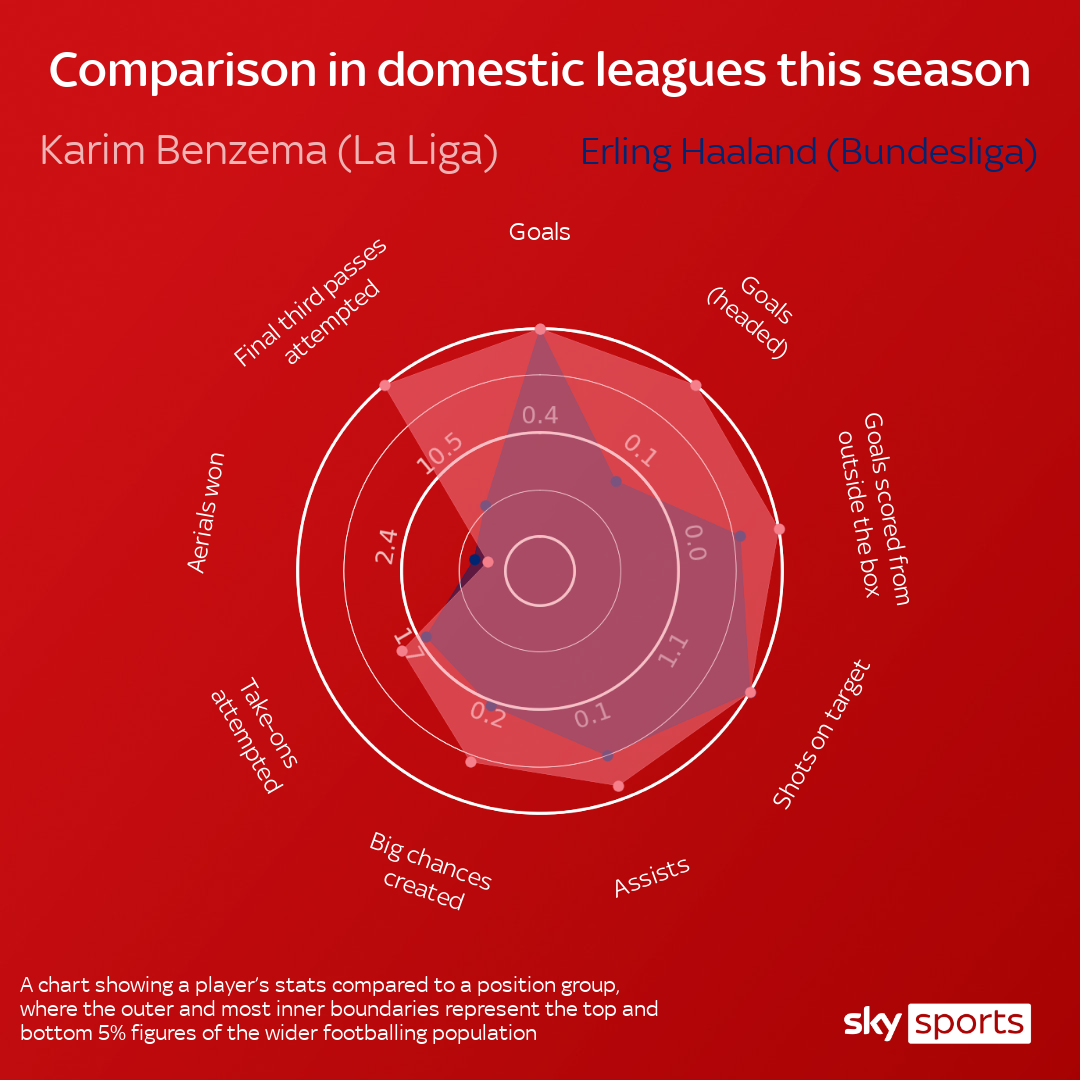 “It’s interesting that Benzema is set to have one of the best, or if not the best season he’s ever going to have for Real Madrid, certainly in terms of numbers and goals and yet we’re still very much talking about Real Madrid signing Haaland this summer or Mbappe or Kane, or whoever it is.

“It very much gets pushed under the carpet that Benzema has been their best players this season, playing in that role that these guys would presumably come in and fulfil.

“Part of that is Benzema is 33, his contract is up at the end of next season and there certainly is a need to look to the future. I think it does contribute to the sense that Benzema has never quite got the credit he deserves.

“That certainly is the case aboard but in Spain now, particularly after his last year or two, there is a realisation of his quality and what he brings to the Real Madrid team.”

Benzema’s impact on French football also cannot be underestimated. He is the second-highest scoring Frenchman (366) in history, only behind Thierry Henry, who finished his career with 411 goals. Closing that 45-goal gap is certainly achievable for Benzema over the next few seasons. But the most impressive part of it all? Benzema has never been Real Madrid’s go-to guy for penalties and has been omitted from the France squad since 2015.

“In a way, his exclusion from international level, the fact he missed the 2018 World Cup which France won, it doesn’t help his reputation on the world stage,” Allnutt added.

“Perhaps if he had played in a few international tournaments and done well, maybe even finished as top scorer or contributed to France winning a major trophy, maybe people would place him higher up in the pantheon of modern-day strikers.”

Should Liverpool be worried? 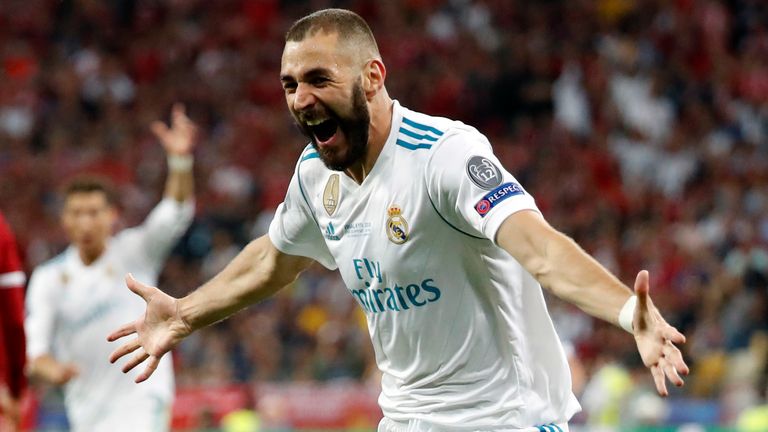 Of course. Benzema is going to be one of Real Madrid’s main attacking threats, having scored five Champions League goals in his six appearances this season.

Two of these came at home to Borussia Monchengladbach in the Group B decider, which sent Real Madrid through as group winners.

Benzema is hardly a stranger to scoring against Liverpool either. He has netted four goals in each of their last three Champions League meetings, three of which came in the 2014/15 group stages. His last goal was in the 2018 final, scoring the first of the game as Real Madrid went on to lift the trophy.

Much of Benzema’s influence could hinge on three key Liverpool players. Jurgen Klopp has preferred Ozan Kabak and Nat Phillips as his centre-back partnership in recent games, with the pair keeping clean sheets in Liverpool’s last three games in all competitions, including the last-16 second leg against RB Leipzig.

Liverpool assistant manager Pep Lijnders recently told Liverpoolfc.com: “Nathaniel is an example where determination and respect can bring you, and an example how collectively this team and staff is working.He puts his head where other players don’t put their feet. He has a heart like a lion.

“Ozan is a big talent, so much progression is still possible. He adapted fantastically inside our club from a context like Schalke and had an immediate impact with Liverpool.”

Ozan on his centre-back partnership with Nat 💪 pic.twitter.com/oGQg5sTbsc

Their success has also been aided by Fabinho just ahead of them in defensive midfield, an additional screen that is needed for two young defenders. He was imperious against Arsenal on Saturday and named as Sky Sports’ Man of the Match.

If Liverpool want to keep Benzema quiet, he will be key, whether playing ahead of Kabak and Phillips, or slotting into the centre of defence for a boost of experience.

Liverpool will be hoping history does not repeat itself. Their victory against Arsenal showed signs of the team that has dazzled over the last few years and facing Real Madrid, and particularly an in-form Benzema, will be an indicator of where they are and how the rest of their season could play out.

But the striker is hungry for goals. Benzema has never scored ten goals in successive games in his Real Madrid career but Tuesday could be the day to make some personal history.