Transfer news: Who could be on the move this summer?

Atletico Madrid goalkeeper Jan Oblak has opened up on his future amid reported interest from Manchester United and Chelsea. Oblak has established himself as one of Europe’s best keepers since joining Atleti from Benfica in 2014.

The Slovenian international was just 21 years old when he signed for Atleti for £12.6million, replacing Thibaut Courtois, who left for Chelsea after three years on loan in Spain.

Oblak has been exceptional for Diego Simeone’s side, keeping a staggering 157 clean sheets in 298 club matches across all competitions.

The 28-year-old has been with Atleti for seven years and signed a fresh deal in April 2019, keeping him at the club until June 2023.

Both United and Chelsea have previously been linked with a move for Oblak, but his €120m (£104m) buy-out clause has so far prevented a transfer to the Premier League.

JUST IN: Jose Mourinho to return to management ‘very soon’ after Tottenham sack 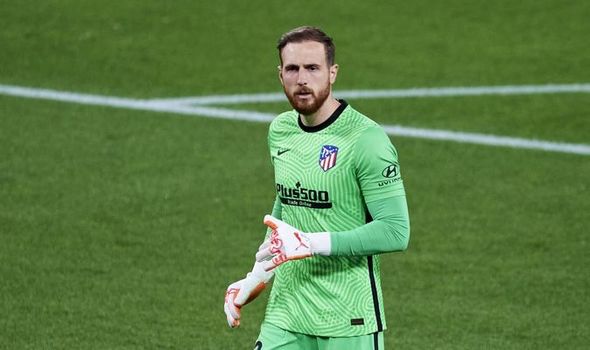 The Blues were interested in Oblak in the summer of 2018, but instead opted to sign Kepa Arrizabalaga from Athletic Bilbao for a then club-record fee of £71m.

United were linked when David de Gea’s future at the club appeared uncertain and the emergence of Dean Henderson as a competitor for the Spaniard’s position has made his future the subject of speculation once again.

Oblak is happy at Atleti, who are two points clear of rivals Real Madrid at the top of La Liga with five games remaining, but has not ruled out a move to the Premier League in the future.

“The Premier League has strong teams. Maybe the strongest. But I think in the end it is what the coach is asking of you. You listen to his instructions,” he told BBC Sport.

“You are one of the 11, so you do what he asks of you. All the players on the pitch are thinking like that. It doesn’t matter if it’s the Premier League, Italian league, Spanish league, wherever you go you need to do what the coach is asking you to do.”

Asked if he can picture himself playing in the Premier League, Oblak said: “I don’t know. I don’t know what the future will bring, but I am sure that in any league I would play I could play well. You never know what will happen in the future.

“Now I have been in Spain for seven years. Let’s see. I’m still young. Not so young anymore, but I still have some years in front of me.

“The most important thing for me is the hope that I do not suffer any injuries. Let’s see what the future will bring.”