Doha: The line snaked out the door. Lines, actually – two separate, lengthy queues full of anxious journalists, waiting to see if they’d be let into what, for many, was their first and perhaps last chance to breathe the same oxygen as arguably the greatest footballer of all time.

“It’s crazy in there,” one woman in a FIFA blazer was heard saying. She wasn’t wrong.

The Qatar National Convention Centre has been turned into the base of operations for the world’s media during this tournament. It’s not like previous World Cups, where things happen in different cities dotted across a bigger country. Here in this building, a sprawling network of halls and meeting rooms, reporters and commentators can catch buses to and from stadiums and training venues, tap away at their laptops in huge workspaces, and chow down FIFA-subsidised meals (and beers, too, thankfully). It’s also where each of the 32 teams have to conduct their official pre-match press conferences.

So when Argentina confirmed that Lionel Messi would be speaking in Press Conference Room 2 – the day before the first match of his fifth and surely last World Cup – it suddenly became the hottest ticket in town.

Well, if there were tickets. They could have sold tickets, really.

When this masthead clocked the above information, it triggered a mad scramble out of the Khalifa International Stadium – England were up 3-0 against Iran at half-time; the game was done – into an Uber to the QNCC and straight to the back of queue number two, which mercifully moved fast. 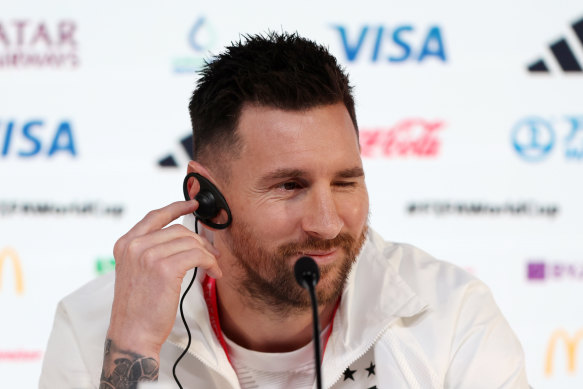 Lionel Messi was in a reflective mood at his first press conference of the World Cup.Credit:Getty

Soon enough, there were no spare seats; plenty missed out. Lined up at the back were at least 30 television cameras, many of them pointed at Spanish-speaking broadcasters doing live crosses.

There were double, if not triple that number of photographers, and all up, probably around 300 iPhone-toting journalists from around the planet. There are rare occasions where it feels like humanity’s collective attention is focused on one event, one person. This was one of those times.

By now, this sort of scene, extraordinary as it was, must feel a little mundane for Messi, 35, who is in the twilight of his truly spectacular career, and ready to close the book on his days in an Argentinian jersey – fully aware that most football fans around the world, even accounting for their own patriotic desires, would like to see him doing it with the World Cup trophy in his grasp.

“Yes, it’s great that so many fans are supporting us, and that so many people are willing for us to win,” the seven-time Ballon d’Or winner said. 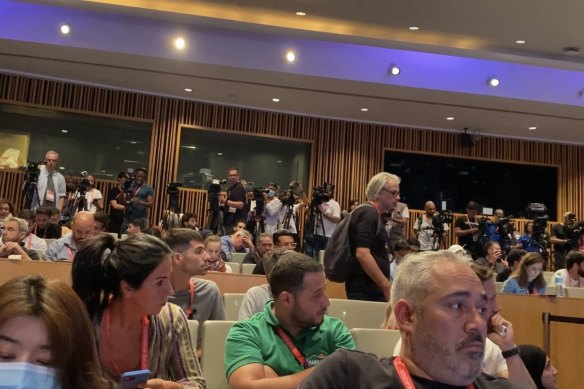 The room was packed for Lionel Messi’s presser.Credit:Vince Rugari

“I’m very grateful for the love that I’ve felt throughout my whole career, everywhere I’ve been. I’ve felt it so strongly, and it makes me really happy that there are so many people that wish the same thing I do.

“I am aware that this is a very special moment. It is, most likely, my last World Cup, the last opportunity to make my dream – our dream – a reality.”

The Messi No.10 jersey is ubiquitous everywhere, but especially here in the Middle East. Arabs absolutely love him, to the point where there will be genuinely conflicting loyalties when Argentina face Saudi Arabia at the Lusail Stadium on Tuesday: a Messi hat-trick and a Saudi win might not even be their ideal outcome. 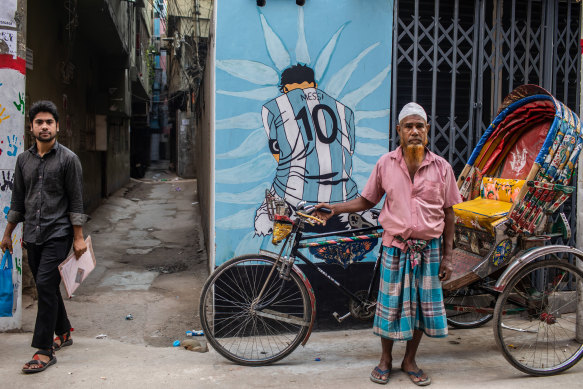 Lionel Messi is universally popular, but the Arab world has a particular love for him.Credit:Getty

Such is the way when it comes to a celebrity athlete of this magnitude, every single detail of his life is obsessed over. On Monday (local time), a screen grab of Messi’s swollen ankle went viral, and news outlets dissected it for any possible shred of meaning.

Somewhat bemused by the “rumours”, Messi confirmed he was physically fine and ready to play.

It’s hard getting a question in at these events. They must be asked into one of several roving microphones. A moderator, sat next to Messi and an Argentinian official on stage, directs them around the room, gesturing and waving as if she was the conductor of the world’s lamest orchestra. Whenever she surveyed the masses in front of her, almost every hand shot up, as if these journalists were children clamouring for a teacher’s attention. At times, it felt that way.

Messi said he was in a more reflective mood these days, and admitted he was trying to take in as much of what’s left in his time as a player – something he hasn’t always been good at. Perhaps the only thing in this football caper.

“I don’t know if it’s the best moment in my career, or the happiest moment, but I feel really well,” he said.

“Maybe I’m a bit more mature. I’m trying to enjoy each moment. Maybe before, I didn’t think about that … when you play every three days, you don’t have time to enjoy. Before it was just playing and thinking about the next game, keep playing and keep winning.

“I’ve missed a lot of things in my career … age makes you see things differently. Now, maybe, I try to focus more on all the small details.”

With that, the moderator closed the floor for questioning and announced that Argentina’s coach, Lionel Scaloni, would be up next. Messi got up and was clapped out of the room.

And then it emptied.

Watch every match of the UEFA Champions League, UEFA Europa League and UEFA Europa Conference League on Stan Sport. Returns for the Round of 16 in Febuary 2023, with all matches streaming ad-free, live and on demand.