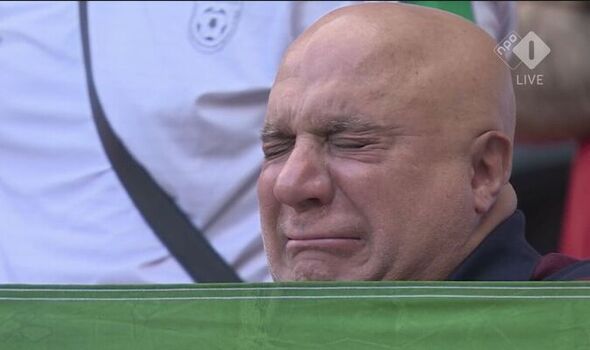 Iran’s footballers were reportedly forced to sing their national anthem before kick-off against Wales on Friday after refusing to do so in their World Cup opener against England earlier this week. The country is currently in a state of political turmoil following the death of Mahsa Amini, who was killed under suspicious circumstances after she was arrested for a breach of the Islamic dress code.

Amini’s death has sparked nationwide protest in Iran and the nation’s footballers took a stand before their match against England by refusing to sing their anthem, which was heavily booed and whistled by their own supporters in the stands. They appeared to back down before their crucial Group B meeting with Wales on Friday, though, by opting to sing as some Iran fans wept inside the stadium.

It has been suggested that Iran’s decision to avoid a repeat of their silence during the anthem may have been influenced by the threat of being punished by the country’s regime upon their eventual return, with political dissent considered a crime that can be met with the death penalty. Iranian officials had already been discussing a crackdown on any perceived disrespect to their national anthem ahead of the World Cup, which may have effectively forced their footballers into singing prior to kick-off against Wales after choosing not to before their opening defeat to England.

Some Iran fans in Qatar have already made their feelings clear by showing their support for the protesters in their home nation, with several flags in the stands carrying the words: “Women, Life, Freedom.” A handful of supporters were seen crying during the pre-match anthems before Friday’s game against Wales, with emotions clearly running high among those in attendance at the Ahmed Bin Ali Stadium.

There were also protests in the arena prior to kick-off, with loud boos and whistles ringing out as the Iranian anthem was played, while some fans were instructed to remove banners by Qatari security officials. Iran’s regime has taken a brutal stance against protesters and dissenters in the country in the months since Amini’s death, with over 400 people having reportedly been killed over the course of the uprising thus far.

Several match-going Iran supporters in Qatar have already voiced their belief that the national team should not be playing while civilians are being killed back home, with 24-year-old fan Elmira telling The Sun: “I have mixed feelings. I love football but with all these children, women and men killed in Iran, I think the national team should not play, It is not Iran’s team, it is the Islamic Republic’s team.

“They could refuse to take part in the World Cup or even refuse to play if they were forced to go, to show that they are part of the nation, to show solidarity with mothers in Iran whose children were killed by the regime.”

Meanwhile, fellow Iran supporter Setareh added: I” know it is their job to play football but with all those children killed in Iran, they should have stood in solidarity with the people. Especially when the England team is going to kneel. How can the national team show no solidarity?”

We’ll be bringing you the very latest updates, pictures, and video on this breaking news story.

For the latest news and breaking news visit: /sport

Stay up to date with all the big headlines, pictures, analysis, opinion, and video on the stories that matter to you.