Andy Hinchcliffe on England U21 struggles at European Championships: “If the message for the U21s is about style, not about how we win games, going to tournaments is absolutely pointless. We might as well play a load of U21 friendlies if it’s about how you play rather than the results.” 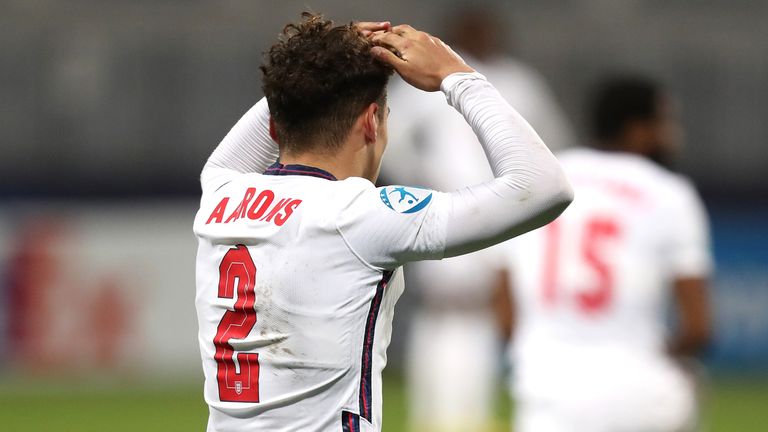 After another early England exit, Andy Hinchcliffe said entering Euro U21 tournaments is “absolutely pointless” if the Young Lions only serve as a pathway to the senior side.

England were knocked out in the group stage of the 2021 Euro U21 Championship on Wednesday despite a 2-1 win over Croatia, as Domagoj Bradaric’s injury-time screamer ensured Croatia went through to the quarter-finals on goal difference.

It was the fifth tournament out of the last six that England have exited at the group stage.

Even ahead of their final game, with qualification for the quarter-finals still possible, boss Aidy Boothroyd labelled the U21 manager role an “impossible job” whose “primary aim” was to breed players ready to play for Gareth Southgate’s senior squad.

Sky Sports’ Andy Hinchcliffe, who has covered all three of England’s games at this year’s tournament, said there was little point in entering international competitions without an aim to build a winning mentality among younger age groups.

He said: “Of course it’s about progression, but why enter a tournament if you think winning games, or the tournament, breeding a winning mentality, doesn’t matter? That has to be as important as being a pathway to the senior England team.

“Darren Bent was talking about how getting into the seniors is more about how you play for your clubs than for the England U21s.

“If the message for the U21s is about style, how we play the game, your development as an international and not about how we win games, getting a winning mentality, then going to tournaments is absolutely pointless. We might as well play a load of U21 friendlies if it’s about how you play rather than the results.

“You look at Spain, Italy, Portugal, Germany, they breed winners. That’s the point of going to tournaments, working out how to get the job done in tournament football. It’s not the same as qualifying, you’re together for a longer period of time, you’re against better opposition. It’s about how you get the job done, then you can take that down the line into senior England competitions.

“Yes, the squad could’ve been better with Jude Bellingham, Phil Foden and Trent Alexander-Arnold in it, but we’ve had very good squads in the past and they’ve not been able to get out of the group stages.

“It’s starting to be a historic problem, and if it is about a pathway rather than being successful, then don’t enter tournaments, because it’s a waste of time – because we’re not learning anything about how to progress at this level of tournament football.

“That’s where England fell short in two of these games. In three matches, if you’re not the better team, you’re Gareth Southgate looking at that and thinking that has to be a bit of a worry.”

Is this the end for Boothroyd?

The Croatia match may prove Boothroyd’s last game as England U21 boss as his contract is up with the Football Association, and he has now overseen back-to-back group stage exits from European competition.

Aside from results, Hinchcliffe slammed a lack of “redeeming features” from England’s performances in Hungary and Slovenia, and a lack of stability in both style and personnel across the tournament.

Boothroyd made a raft of changes for the final group game following a dismal performance against Portugal on Sunday, partly as a result of injuries suffered in the squad, but it marked the latest in a number of significant shifts throughout the group stages.

The U21s had already changed formation following their opening game, a 1-0 defeat by Switzerland, moving from a back three to a four-man defence for both of their final two matches, and made 11 changes to his line-up across the group stage.

“There has to be some type of plan,” said Hinchcliffe. “You look at qualification, how well they did, the goals they scored, but you step up the level of opposition and then shine a light on how good we are, and whether you can create one or two chances to win it for you even in really tough games, even against better opposition.

“Even if they got through, I think you’d assess those matches and come to the conclusions we’ve come to when they haven’t made it through. It’s something that has to be assessed, and they have to decide if this is the way forward.

“It’s not just this tournament, five of the last six we’ve gone out here. When the class of opposition steps up and we play tournament football, regardless of the opposition and who’s coaching them, we fall flat. Maybe it’s a cultural thing and we’re just not good enough. I think Aidy would see that, everybody would see that.

“Those players look good enough at domestic level, when they all come together as a national team, we seem to have the struggles England have had across the age groups.

“The seniors seem to be getting a handle on it a little bit more recently, but with the planning and success at the junior levels, you just think this would be the tournament where we might see that coming to fruition, and it just hasn’t been there. It’s been incredibly poor.”