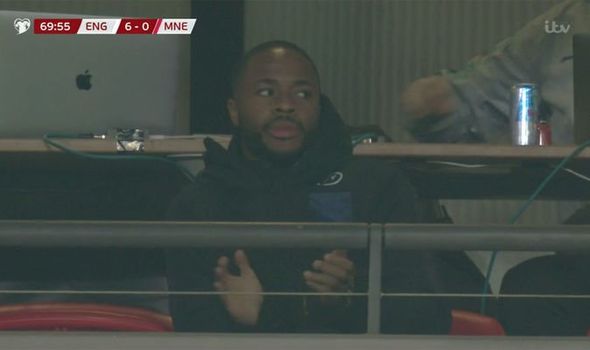 Sterling was left out of the Three Lions’ 1000th senior match due to a falling out with Gomez at the St George’s Park canteen on Monday, during which he is said to have scratched the Liverpool defender’s eye.

The pair exchanged words the preceding day as a frustrated Sterling took out his temper on Gomez in Manchester City’s 3-1 loss at Anfield and, despite the duo seemingly resolving that issue after fuill-time, Sterling reignited the flare on England duty.

After asking Gomez if he still thought he was “the big man” Sterling left a scratch on Gomez’s face and drove away from England’s training complex only to return after a call from Jordan Henderson.

Gareth Southgate decided to leave Sterling out of the game against Montenegro as a punishment for his actions.

It left Sterling watching England rout Montenegro high up in a Wembley box on Thursday night, clad in a black puffy coat.

He sat next to Henderson and the camera inevitably panned to the 24-year-old when Gomez began to tread the hallowed turf.

Mason Mount made way for Gomez in the 70th minute and Sterling was seen clapping on his team-mate, as is usually custom.

Sterling did not look overly enamoured during his applause but, then again, Southgate suggested the forward may have been annoyed at his omission.

“I wouldn’t imagine that he’s hugely enthusiastic,” Southgate said ahead of the game.

“But I can understand that and in the end he’s with the group. He’s a massive part of what we do.

“He’s with us for the game [on Thursday], he’s back with the team on the training pitch enjoying his football. He trained superbly well, as he always does. The thing is finished.”