How Lucien Favre propelled Borussia Dortmund back into the Euro elite: Clever signings, young guns like Jadon Sancho and a devastating attack have Germans challenging on all fronts

The highest praise of all came from Diego Simeone himself. Borussia Dortmund, said the Atletico Madrid coach, were one of the best teams in Europe.

It was hard to argue with him. A fortnight earlier, Dortmund had thrashed Atletico 4-0. After grinding out the first 70 minutes, they had spent the final 20 laying waste to one of the most fearsome defences in Europe.

Two weeks later, as Atletico prepare to host Dortmund in the return fixture on Tuesday night, the German side are keen not to appear too cocky. 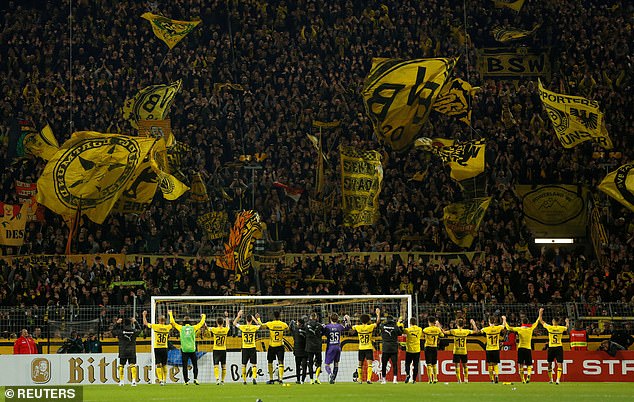 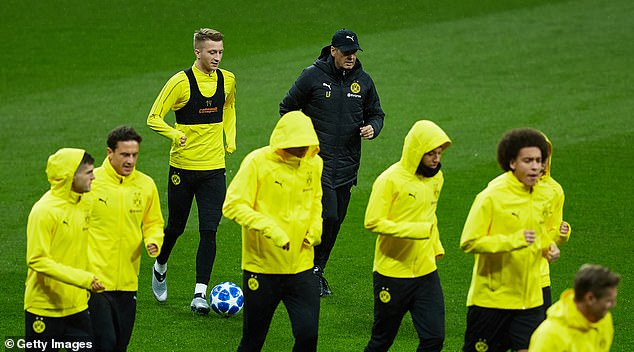 ‘We know Atletico very well, they have been one of the best teams in Europe for seven or eight years,’ said Dortmund coach Lucien Favre on Monday. My colleague Diego Simeone is doing a great job.’

The softly-spoken Swiss is famed for his good manners. Yet for all his understatement, he must privately be on cloud nine.

In just a few short months, Favre has utterly transformed Dortmund, propelling them from the darkest doldrums back into the European elite.

With three wins in three so far, they already have one foot in the Champions League knockout stages, and another result against Atletico on Tuesday would seal the deal. 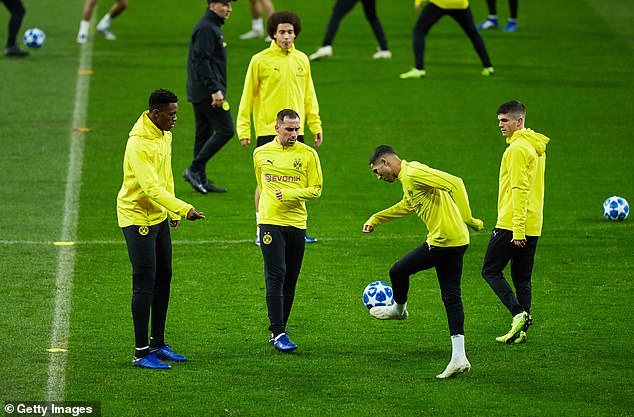 Unbeaten in 15 games under Favre, they are four points clear at the top of the Bundesliga and are slowly assuming the mantle of title favourites.

They are also a team of the future. Aside from the excellence of Jadon Sancho, youngsters such as Dan-Axel Zagadou, Achraf Hakimi and Jacob Bruun Larsen are among the top performers this season. There is a sense of a new dawn around the Westfalenstadion.

Compare all this to last season, when it appeared that Dortmund’s golden era had finally ended. Peter Stoger’s drear pragmatism had steadied the ship after the rise and crash of Peter Bosz, but Dortmund appeared to be a club in decline, searching in vain to rekindle the old Jurgen Klopp magic.

‘After a bad season, it was clear to all of us that a lot had to change,’ said sporting director Michael Zorc, identifying Favre as the reason for his team’s success. ‘He started to put his plan into action from the very first day.’

Just as he once did at Borussia Monchengladbach, Favre has built a devastatingly direct attacking unit on the foundation of a solid defence. Building around senior players such as Marco Reus and Axel Witsel, his largely fresh-faced side have played far beyond their years. 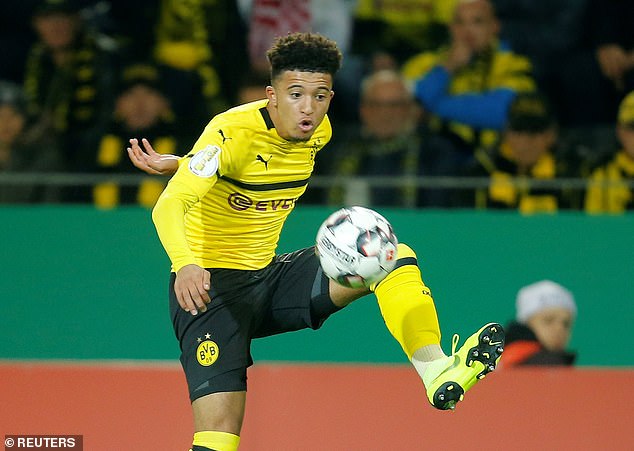 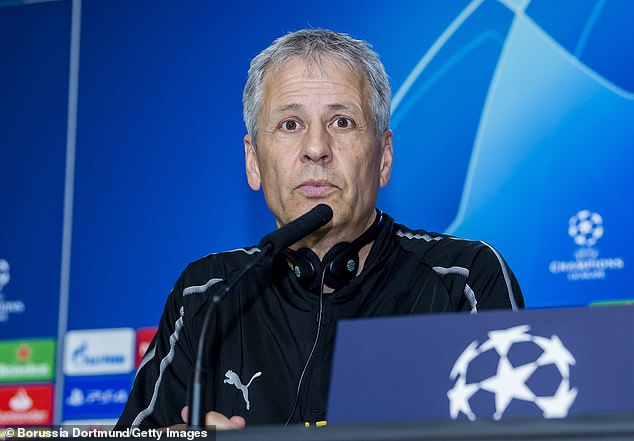 Sancho is the finest example. The young winger has electrified the Bundesliga with super performances from the bench, wracking up goals and assists by the handful and earning himself a first England call-up at the age of just 18.

Sancho has undoubtedly benefitted from Favre’s approach. He has been given time on the pitch, but a heavy rotation policy has kept him on his toes. While England and the press have descended into a state of excitable delirium about the young superstar, Favre has kept a lid on the Sancho-mania.

‘Sancho has a lot of potential to improve and he knows that,’ the Dortmund coach said before last week’s win over Wolfsburg. ‘He is so good already, but he needs to stay calm and keep working hard.’

That sense of gentle sobriety has allowed Favre to get the best out of his young players, but also negotiate almost every problem he has faced in his first few months at Dortmund.

In the early season, Favre was besieged with questions about the future of Mario Gotze, who appeared surplus to requirements. Since then, he has quietly worked out a space for Gotze, who has rewarded him with some strong performances of late. 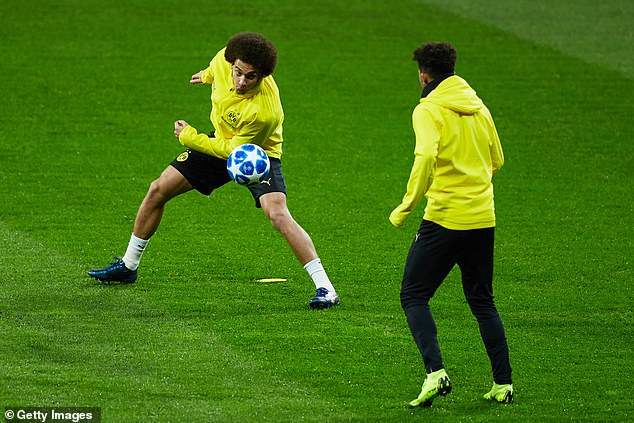 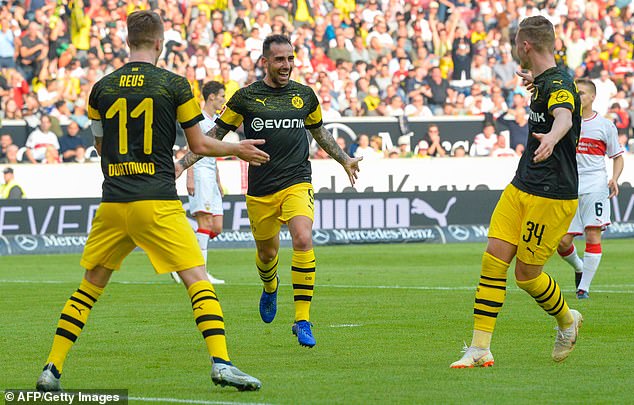 Questions were also raised about the holes left by departing players. Yet Sokratis has been effortlessly replaced by Zagadou and Abdou Diallo, while Bruun Larsen and Paco Alcacer have stepped into the role left vacant by Michy Batshuayi.

Perhaps most importantly of all, the signing of Witsel has paid off in abundance, with the Belgian bringing well-needed experience and control to the Dortmund midfield.

Not that they are always as mature as all that. ‘The high won’t last forever,’ warned Reus after beating Atletico Madrid, and some tougher games in the last two weeks have proven him right.

After Dortmund dropped points with a 2-2 draw against Hertha Berlin, chief executive Hans-Joachim Watzke insisted they are ‘too green’ to win the title.

The big test of that thesis will come on Saturday, when Dortmund host Bayern Munich in a game which should set the tone for this season’s title race. Yet even the prospect of a Bundesliga title race is a rare thing indeed these days, and speaks volumes of Dortmund’s quality.

However green they may be, Dortmund have got their swagger back under Favre.