Home » Soccer » ‘He was in tears’: Sydney FC face depth test as Brattan ruled out for season

Sydney FC’s depth this season is set for an early test after key midfielder Luke Brattan was ruled out for the rest of the campaign, with a further five players to miss Saturday’s A-League Men clash with Macarthur FC.

Scans confirmed the injury Brattan suffered during Wednesday night’s 4-2 FFA Cup win over Sydney Olympic was, as feared, an ACL rupture which will end his 2021-22 campaign before it has even begun. 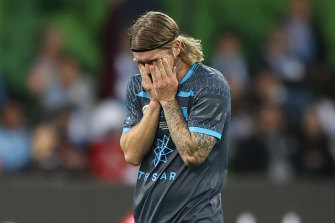 Luke Brattan is set to miss the rest of the A-League season after hurting his ACL in the FFA Cup.Credit:Getty

The 31-year-old missed Sydney’s opening-round derby draw with the Wanderers due to a suspension from last season’s grand final, and is now facing a long road to recovery.

“It’s obviously a big blow for him and the club, he’s a big player for us and we’re very disappointed,” coach Steve Corica said.

“He was in tears the other day, he’s a very emotional guy. But he’s got a great family around him, good support by the club as well and all the boys, so we’ll get right behind him. A few of the other boys have done these injuries before and we’ll get him through it, no problem.”

Brattan’s absence is likely to open the door for young midfielder Calem Nieuwenhof to nail down a starting midfield spot. Nieuwenhof, 20, scored a memorable long-range goal on debut last season but a back injury limited his contribution to just nine games. He is regarded as one of the club’s brightest prospects.

However, the Sky Blues have other problems on the injury front. Bobo, Kosta Barbarouses and James Donachie – who also didn’t feature in the derby – won’t play against the Bulls. The latter two are expected back next week, with Bobo due to return a week later. New signing Connor O’Toole is out for at least another month, while veteran left-back Michael Zullo, who has played just under 400 minutes in three seasons, remains on the outer indefinitely due to an ongoing calf complaint.

The Macarthur match is also Sydney’s third game in a week. “It’s not ideal, especially with a few players out. I’d like to give a few boys a rest but we can’t because we’re a little bit low on numbers,” Corica said. “We need to get through this week, and hopefully next week we get a few boys back.”

As for the Bulls, fringe Socceroo Tomi Juric could feature against the Sky Blues as he recovers from a pre-season groin setback – but if he does, it’ll be off the bench. Coach Ante Milicic is keen to handle the injury-prone striker with the utmost care.

Milicic also confirmed the Bulls were looking at taking their next home game against Central Coast Mariners on December 5 to Penrith’s Bluebet Stadium, with the pitch at Campbelltown Stadium unlikely to improve in time. It could be an extended residency for Macarthur, who lashed out at Campbelltown City Council for failing to keep the club informed on the state of the surface.

“That’s the suggestion at this stage but I’m just purely focused on tomorrow night being an away game against Sydney FC,” Milicic said when asked about the Penrith option. “We’ll just work on what we can control and I’m sure the board will come up with a decision where we’ll play the following week against the Mariners, but I haven’t given it too much thought.”

Watch Messi, Neymar, Ronaldo and football’s biggest superstars in the UEFA Champions League with every match streaming ad-free, live and on-demand only on Stan Sport from this Wednesday 15 September.