The growing backlash towards the European Super League has evolved into a powerful grassroots revolt the 12 clubs behind the proposal will regret triggering, Liverpool legend Craig Johnston predicts.

One of Australia’s greatest football exports, Johnston has added his voice to the chorus of disgust against the Super League concept which has shocked world football.

Craig Johnston in action for Liverpool in 1987.Credit:Getty Images

“Good has to come of it,” said Johnston, whose eight seasons at Anfield helped build the club’s significant support base in Australia.

“I think it’s really good that this has boiled to the surface, and no doubt COVID has revealed, financially, a set of ugly truths that we all knew were there but are now evident to everyone. The clubs have been losing money and they’re doing something about it, but it’s just not acceptable in any sense – socially, politically, morally.

“They’ll learn a big lesson out of this and hallelujah. What this shock has brought is, I think, incredibly beautiful. This is a grassroots revolt, for the good of the game.

“You’ve got the bread-and-butter public versus the select group that want to wear the blazer and go to the gentlemen’s club every night to dinner with each other. It’s not just about money, it’s about elitism, and using the supporters in a highly disrespectful way.”

Players, coaches, UEFA, politicians across Europe, and even Prince William – the president of the English Football Association – have since spoken out over the Super League concept, which would see 12 of Europe’s biggest clubs handed permanent berths in a breakaway 20-team tournament supplanting the UEFA Champions League.

“Now, more than ever, we must protect the entire football community – from the top level to the grassroots – and the values of competition and fairness at its core. “I share the concerns of fans about the proposed Super League and the damage it risks causing to the game we love. W,” Prince William tweeted on the Duke and Duchess of Cambridge account.

Liverpool midfielder James Milner and manager Jurgen Klopp also criticised the plan after their 1-1 draw with Leeds United on Tuesday morning (AEST). Leeds players wore t-shirts during their warm-up which read “UEFA Champions League – earn it” on the front and “Football is for the fans” on the back – a clear message to the rebel clubs.

UEFA has threatened the 12 clubs with expulsion from their domestic leagues and players with bans from international football but there seems to be no backing down from the protagonists, with Real Madrid president Florentino Perez saying the clubs had all signed “binding” contracts. Respected Mail On Sunday sportswriter Oliver Holt suggested on Twitter at least two of the English clubs were having second thoughts.

UK Culture Secretary Oliver Dowden announced the government was ready to step in – with changes to the law if necessary – to stop the league’s creation.

Johnston doubts it will eventuate, not only because of the fan backlash but the steadfast opposition from the Premier League, Italy’s Serie A, Spain’s La Liga and UEFA, the legal implications, and the lack of commitment thus far from clubs in France or Germany, two of Europe’s biggest television markets. 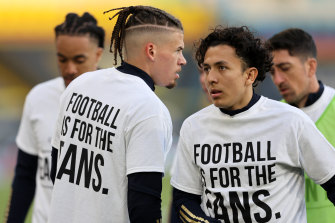 Kalvin Phillips of Leeds United warms up for the Liverpool clash while wearing a protest T-shirt.Credit:Getty

Many, including Johnston, suspect the Super League is an act of brinksmanship from the 12 clubs to achieve further financial and structural reforms to the UEFA Champions League.

“That’s what they’ve been after this whole time. But was that bit of leverage worth the disgust from their own supporters?” Johnston said.

“It’s fascinating the backdrop of it … this has happened before and has been put off before, but what I’m seeing now which makes me believe this won’t happen – it sounds funny, but because of fan power.

“There’s now some truth on the table about what really this game is about. What’s been revealed is the real love for the game at one end, and the real love of money at the other end.

“The money that’s come into the game we all knew would blow up at some time. It has now, but just the love of the game that’s coming out of Rio Ferdinand’s mouth, Gary Neville’s mouth, all of these legends, Robbie Savage – it almost had me tearing up when they were talking about working-class people and where their club was born, and what these foreign billionaires now want to do for their own benefit.

“It’s the six driving clubs in the three driving cities – London, Liverpool and Manchester. It’s the heart and soul of the people in those three places which has been affected the most violently here. They’re just livid that their love of the game can be so disrespected.”