Tottenham: New boss will have 'huge impact' on Kane's future

The 45-year-old former Ostersund and Swansea City man has already been linked with a move to North London to replace Jose Mourinho who was sacked last month.

The Mail previously reported that he has been recommended to Spurs chairman Daniel Levy by technical performance director Steve Hitchen.

Former Tottenham man Danny Murphy has revealed that he is not shocked to see Potter’s name be linked to the vacancy at the Tottenham Hotspur Stadium due to his excellent work on the South Coast.

Speaking on talkSPORT, he said: “I understand [the link] because of the way Brighton play.

“Similarly we were talking off-air about when Tottenham brought in Pochettino.

“He’d only been at Southampton for five minutes before they took him. So they could go down that route again. It might surprise one or two. 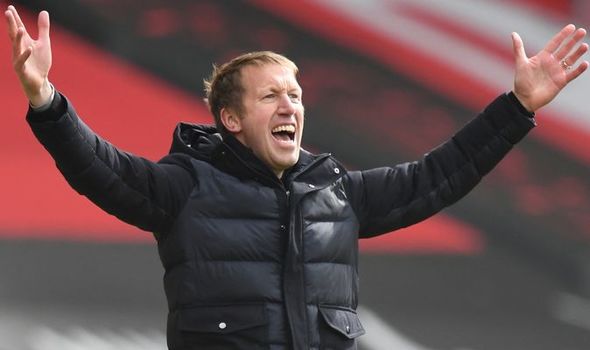 “Tottenham fans generally want someone who has been there and done it before, but they’ve just gone down that road and it didn’t work.

“So I’m not surprised he [Potter] is linked with the job, but we’ll have to wait and see.”

Potter has been with Brighton for the last two seasons following a solitary season spent with Swansea City in the Championship.

He led the Seagulls to 15th in his debut Premier League campaign at the AMEX Stadium after replacing Chris Hughton, whilst they sit 14th and ten points clear of the relegation zone in the current standings.

It is understood that Hitchin is a strong advocate for Potter to be appointed at the Tottenham Hotspur Stadium this summer, whilst Levy is thought to be in favour of a somewhat more illustrious name.

Other candidates continue to be linked to the role though with the likes of Brendan Rodgers, Erik ten Hag, Rafa Benitez and Ralf Rangnik all rumoured to be contenders.

In the meantime though, former midfielder Ryan Mason will continue in his interim role after taking the reins from Jose Mourinho.

The 29-year-old has presided over three games thus far in all competitions, winning each of his Premier League clashes against Southampton and Sheffield United.

He was also given the opportunity to lead Spurs out at Wembley in the Carabao Cup final where they were defeated 1-0 by Manchester City.

As it stands, Spurs sit sixth in the Premier League table and five points off of the top four.