Sunday's "Big Blue" between Melbourne Victory and Sydney FC shapes as a massive test of the strength in depth of Marco Kurz's squad, which has struggled to gain traction in the early rounds of the season after losing several key players at the end of the last campaign.

Victory face massive personnel problems for their trip to Sydney next weekend, with more than half a team's worth of first choice players missing for either injury or international call-up. 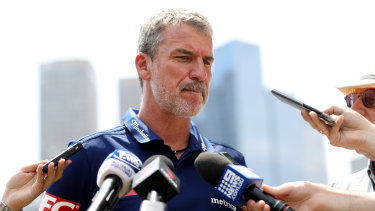 The game was originally scheduled for Saturday but has been pushed back 24 hours to Sunday, which will allow Rhyan Grant and Andrew Redmayne, Sydney's two Socceroos, to return from the Socceroos' World Cup qualifier in Jordan in the early hours of Friday in time to take part in this crucial league match.

But Victory's injured trio of Tim Hoogland, Robbie Kruse and Andrew Nabbout are all still out of action and the Melbourne side will also bemissing Storm Roux, the New Zealand full-back, Kenny Athiu, who started in last Sunday's 1-1 draw with Wellington Phoenix, and Elvis Kamsoba.

Roux is away with the All Whites, Athiu with South Sudan and Kamsoba with Burundi. In addition, defender Thomas Deng is unavailable as he is with the Olyroos.

Victory could have pushed for the upcoming fixture to be postponed given the number of players they are missing. But to have rescheduled it would have contributed to a fixture pile-up at a later stage of the campaign, and this might have come into their thinking, according to the FFA.

That didn't seem to be be the view taken by Kurz after the Wellington match.

"Kenny's away, Elvis is away, Storm Roux is away and Thomas Deng is away – maybe another national player … ask for another one and then we have five away – I have no idea," Kurz said.

"They changed the time to Sunday so that the players from Sydney are ready. It's fact, it's not a joke. They changed from Saturday to Sunday [so] that then the Australian national players are back for Sydney," the German coach said.

"My job is to work with the players who are here. It's a big challenge at the moment for us."

South Sudan face Malawi and Burkina Faso in African Cup of Nations qualifiers on November 14 and 17. Burundi play Central African Republic and Morocco on November 14 and 20 in the same tournament, while New Zealand play international friendlies on Thursday and Sunday against Ireland and Lithuania in Europe.

While Roux will be travelling, Sydney's veteran All Whites striker Kosta Barbarouses, a former Victory star, has opted to miss the NZ games and will remain in Sydney.