Freddie Ljungberg hailed his Arsenal stars after the Gunners came from behind to win 3-1 at West Ham on Monday night. Ljungberg also claimed his side have been living ‘under enormous pressure’ for weeks.

I could feel West Ham getting tired and our passing getting crisper. The boys did amazing

Arsenal came from behind to beat West Ham at the London Stadium thanks to goals from Gabriel Martinelli, Nicolas Pepe and Pierre-Emerick Aubameyang.

Angelo Ogbonna opened the scoring in the first half for West Ham, however, the Gunners netted three times in nine minutes in the second half to hand Ljungberg his first win in charge of Arsenal.

Arsenal were terrible up until their flurry of goals which stunned the Hammers, who remain just two spots above the relegation zone.

And Arsenal interim manager Ljungberg, who replaced Unai Emery at the Emirates, hailed his stars for showing character at West Ham. 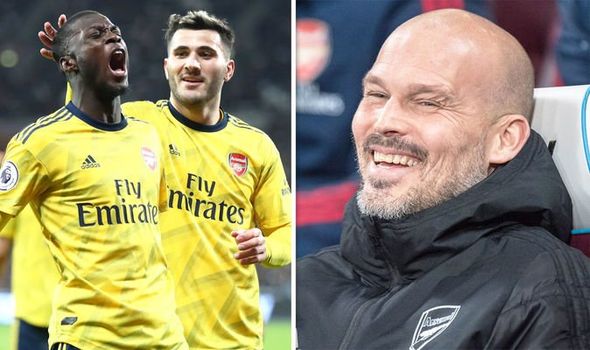 He told Sky Sports: “It means so much for the players. They have been living under enormous pressure and you see it in their performances.

“I could feel West Ham getting tired and our passing getting crisper. The boys did amazing.

“The players responded to the early setbacks and dealt with it. We tried to play and the boys stepped up in the second half. They worked so hard and that’s something we talked about.

“This is down to the players. I’m just there to guide them.

“You can see the players have been a bit low and you see in the dressing room the relief and how happy they are. We enjoy tonight and we continue working tomorrow. We have to work on our belief – that was the difference. 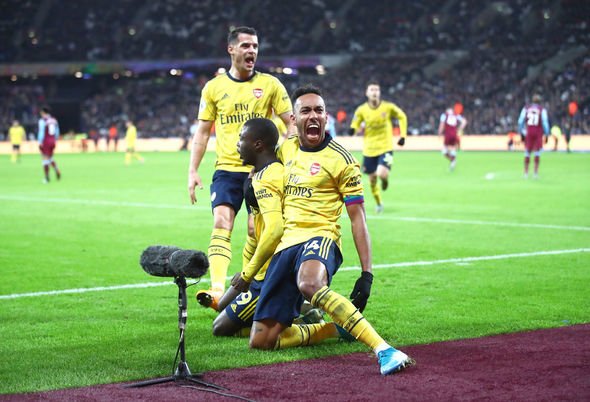 “It’s a great feeling and it’s a lot better to win than lose. We shouldn’t get carried away.”

Arsenal striker Aubameyang was quick to praise Ljungberg after the Gunners win.

The Gabon international explained Ljungberg’s half-time message to his players in the dressing room, with the Arsenal boss demanding urgency.

He told Sky Sports: “We feel good. I think we played well in the second half so we are happy to win this game. We tried to put some tempo in the game and to play fast and find spaces, and we did that.

“At half-time, Freddie told us to play with a higher tempo. It was tough but we have the quality in the squad, and if we believe in ourselves, we can go forward and win games. We will take this second half as an example for the rest of the season.”

The 3-1 win leaves the Gunners ninth in the Premier League after 15 games.

Arsenal will now turn their attention to their trip to Standard Liege in the Europa League on Thursday evening.

The Gunners then welcome Manchester City to the Emirates in the Premier League on Sunday afternoon.