(CNN)It’s been 25 years since the last Ford Bronco was made. Ford is bringing the brand back, with the unveiling of three new off-road-oriented SUVs under the Bronco name. At an online event Monday night, Ford introduced the 2021 Bronco, which will come in a two- and a four-door version, and the smaller Bronco Sport. The new Broncos are engineered for hard off-road driving and include features designed to make it easier to get far from civilization and even stay there for a while.

The Bronco, which will come in a two- and a four-door version, and the smaller Bronco Sport will compete directly with Fiat Chrysler’s Jeep (FCAU) line of off-road vehicles. The market for rugged SUVs, which Jeep currently dominates, is growing twice as fast as SUVs overall, Ford executives have said. 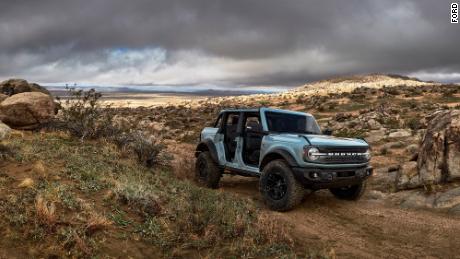 The larger Broncos will be available with 35-inch off-road tires and will be able to drive through water nearly 3 feet, 10 inches deep. It has independent front suspension, unlike its main competitor, the Jeep Wrangler. Independent suspension, used on almost all modern passenger vehicles, generally provides a smoother ride and better on-road handling than a single solid axle. It still has a solid axle in the back though, like most pickup trucks, a design suited to hard use.

Like the Wrangler, both the two- and four-door Bronco will have a removable roof and doors. Buyers will be able to choose either a hard roof that can be removed in sections, a cloth top, or both. Unlike the Wrangler, though, the Bronco’s doors will fit inside the vehicle after being removed.
The Bronco will be available with a choice of either a 10-speed automatic or seven-speed manual transmission. (The manual transmission will have six gears for ordinary driving, plus a seventh for low speed off-road driving.) It will be powered by either a 270-horsepower 2.3-liter turbocharged 4-cylinder engine or a 310-horsepower 2.7-liter turbocharged V6.

While all of the new Bronco SUVs are designed for hard off-road use, the Bronco Sport isn’t quite as hard-core in its capabilities. It also has more convenience features than the more truck-like Bronco. While it’s based on engineering that’s similar to car-like crossover SUVs, Ford says that it’s still intended for serious off-road use. Ford engineers boasted of the off-road testing the prototypes have been put through, including driving through deep sand, up steep inclines and crawling across boulder-strewn trails.
The Bronco Sport, available only as a four-door SUV, does not offer a removable roof. Instead of competing directly with the Jeep Wrangler, it’s aimed more squarely at the Jeep Cherokee Trailhawk. It has a number of features intended to make it an ideal camping vehicle, like standard cargo-carrying roof rails designed to hold a rooftop tent. The rear liftgate has strong spotlights to illuminate the area around the back of the vehicle at night, and a cargo organizer tray in the back can slide out to be used as a table. The back portion of the roof is raised higher than the front, allowing enough room to store two bicycles upright with their front wheels removed. 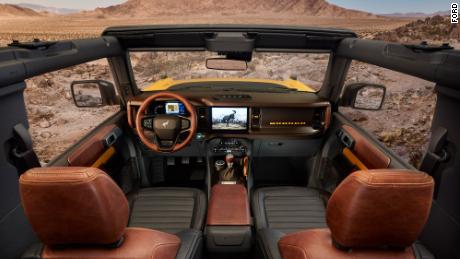 Inside, there are zippered pockets on the backs of the front seats, as well cloth straps for hanging gear. There are also storage compartments under the back seats.
The Bronco Sport has independent suspension in both the front and back, like most vehicles intended for street driving, however it wil also be able to drive through almost two feet of water, according to Ford (F). It will have 28.5-inch off-road tires as standard equipment, but special First Edition models will have 29-inch tires with deeper off-road treads.
Buyers will be able to choose from either a 181-horsepower 1.5 liter turbocharged 3-cylinder engine or a 2.0-liter 245-horsepower 4-cylinder engine. Both engines will come with an eight-speed automatic transmission. In some versions, drivers will be able to select gears using steering wheel paddles. 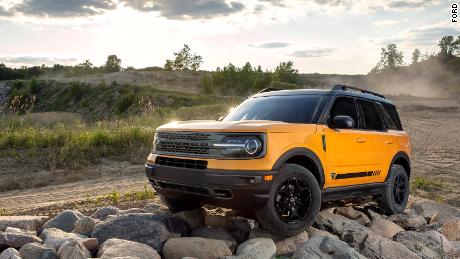 All of the new Bronco models will have selectable driving modes for various terrain. They’re called GOAT modes, for “goes over any type of terrain.” (GOAT was Ford’s code name for the original Bronco while it was under development in the early 1960s.) Modes include Normal, Slippery, Mud/Ruts and Rock Crawl.
There’s also Trail Control, a sort of cruise control for off-road driving. With this feature, the SUV can move along at a set low speed while the driver can concentrate on just steering the vehicle rather than dealing with the gas and brakes. These sorts of features are available on a number of other off-road SUVs. 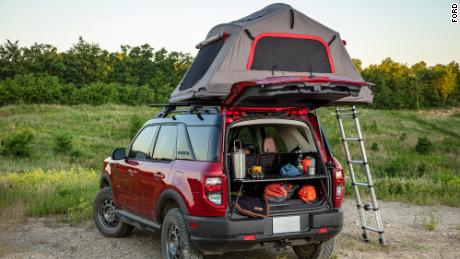 Both the Bronco and the Bronco Sport have blocky square-cornered designs that clearly draw from their 1960s predecessors. The shape also provides a real benefit in off-road driving, Ford designers explained. Drivers can easily see the peaks of the front fenders to know where their wheels are, something that’s important to know when driving between boulders or around a steep drop-off, a design element that goes back to classic off-road vehicles ranging from the original Land Rover and Mercedes-Benz G-Class as well as classic Broncos. Additionally, an available camera system can provide a front bumper view of the terrain just ahead.
The Bronco Sport will be available later this year. The full-size Bronco won’t be available until next spring, but Ford is taking $100 deposits immediately for both the Bronco and the Bronco Sport. Prices for the Bronco Sport will start at $26,660. Prices for the two-door Bronco will start at about $28,500 and $33,200 for the four-door. Ford has not yet announced pricing for the four-door Bronco or the Bronco Sport.
Source: Read Full Article