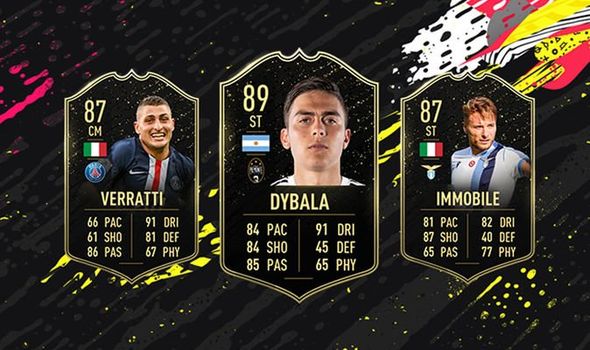 FIFA 20 fanatics have enjoyed their first look at the latest Team of the Week release as EA Sports unveiled their 23-man squad this afternoon.

Ciro Immobile, Paulo Dybala and Marco Verratti all make the cut following their most recent performances, with the trio earning impressive upgrades to reflect their on-pitch displays.

Immobile was on target twice for Lazio as they drew 2-2 with Bologna while Dybala opened the scoring against Inter Milan as Juventus moved top of Serie A with a 2-1 win.

Verratti masterminded Paris Saint-Germain’s 4-0 win over Angers while Chelsea midfielder Jorginho has also been recognised for his efforts in the Blues’ 4-1 win over Southampton.

Wesley and Adama Traore are further Premier League representatives following their doubles against Norwich and Manchester City respectively but there was no room for Eden Hazard in this week’s team.

PSV Eindhoven ace Steven Bergwijn has been boosted up to an 84 rating after a goal and two assists to help see off VVV-Venlo and Jermain Defoe has been handed a ratings increase following his second hat-trick of the season.

Lukas Hradecky, Nelson Semedo and Lewis Dunk all make the starting XI and Adis Jahovic is an unsurprising inclusion following his four goals for Yeni Malatyaspor.

Abdoulaye Sane has also been rewarded for his latest hat-trick and ex-Aston Villa striker Libor Kozak is another who makes the cut, – but who else is in FIFA 20 TOTW 4? 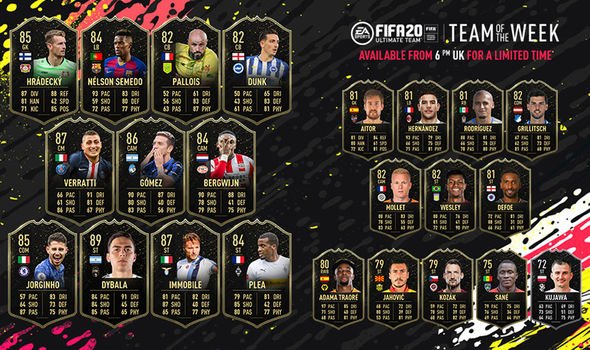