Australia are determined to take their place in the Olympic soccer tournament if the Olympic Games is successfully rescheduled in Tokyo next year but want the players who helped to qualify for the men's under-23 tournament to be eligible to play even if they are older than the usual cut-off point.

“Our football community are rightly proud of the efforts and achievements of the Matildas and the under 23 men’s national football team to qualify for Tokyo," FFA chief James Johnson said. 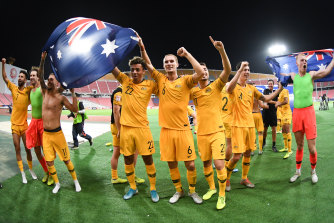 The Olyroos celebrate after qualifying for the Olympics in January.

"We must however ensure the health and wellbeing of the athletes, officials, volunteers, and fans is prioritised. We are glad that the IOC, AOC and all parties involved have reached this decision.

“Men’s football at the Olympics is an U23 tournament but we would like to open up discussion with FIFA and the Asian Football Confederation to consider adjusting the men’s football tournament so that it becomes an U24 tournament for the Tokyo Olympic Games.

"This would ensure the players who helped their nation qualify for the Games this year but might otherwise be ineligible for the tournament next year because of age restrictions, have an opportunity to fulfil their dreams of representing their country."