Harry Maguire was forced off with a suspected concussion after putting in an impressive performance during England’s Group B opener with Iran.

The continual backing of Gareth Southgate for the Manchester United defender has created much controversy over recent weeks and months.

Maguire has been a key player during Southgate’s tenure as England boss, playing  a major role in their run to the World Cup semi-finals in 2018 and the Euro 2020 final last summer. 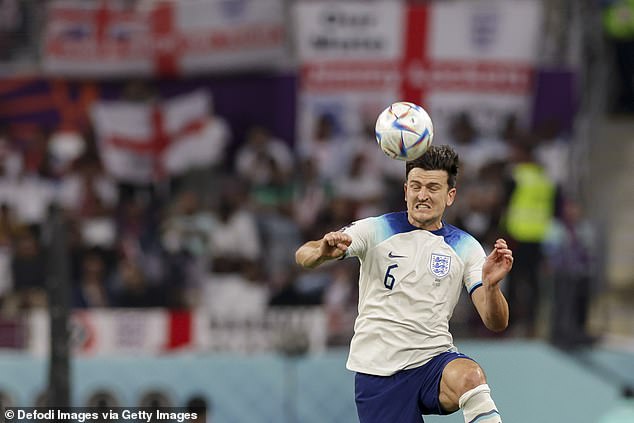 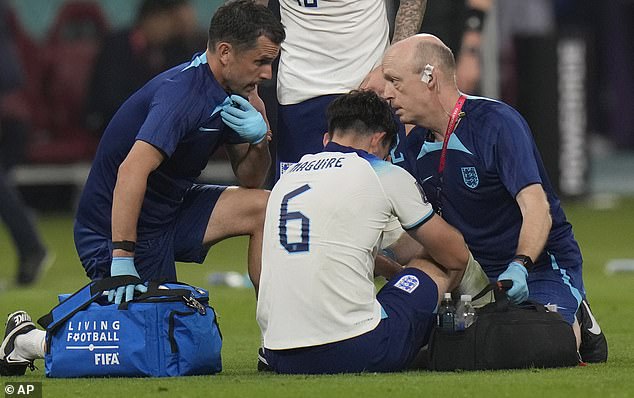 However, he was forced off in the second half with a suspected concussion after treatment

He was even voted into the Euro 2020 team of the tournament – but he has struggled ever since.

The defender has found himself out of Erik ten Hag’s plans at Old Trafford so far this season, slipping down the pecking order and struggling for gametime.

However, after starting England’s game with Iran, he was extremely impressive – looking solid at the back and also posing a threat from set pieces.

In fact, Maguire laid on an assist for Bukayo Saka, and also should have had a penalty when he was seemingly dragged down by Iranian defender Roozbeh Cheshmi, but nothing was given, despite a VAR check. 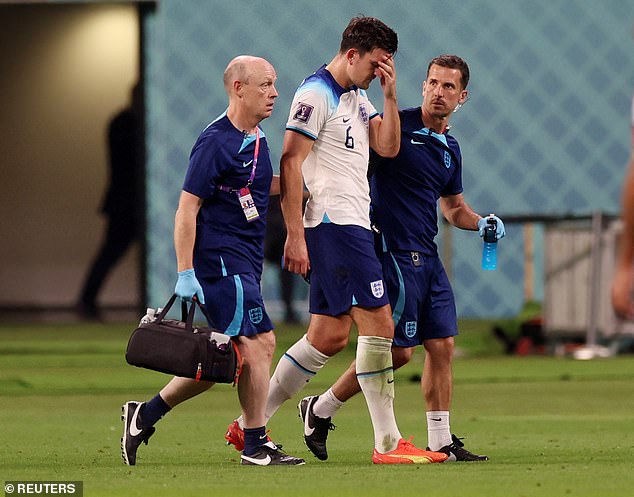 However, just after England had conceded for Iran to bring the game back to 4-1, Maguire was down in some discomfort and received medical attention.

After a few minutes of treatment, Maguire gingerly walked off the pitch with a suspected concussion and he was replaced by Eric Dier.

And following the substitution, England fans were quick to praise the performance of the much-maligned Maguire.

Jermaine Jenas, on co-commentary for the BBC said: ‘Hopefully a sensible decision will be made because Harry Maguire doesn’t look right. You can just see it in his eyes.

‘For Maguire to perform how he did, especially in the first half, attacking in both boxes. He can be proud and hold his head high. It’s a good step in the right direction.’

One said: ‘People who said Maguire shouldn’t start for England are absolute casuals.’

Another added: ‘Maguire in an England shirt is unreal.’

A further supporter exclaimed: ‘When Maguire plays for England he looks like Prime Maldini.’

There was even more praise from elsewhere, with fans also referencing his often poor form for Manchester United compared to his impressive displays for England.

One said: ‘MAGUIRE IS INSANE FOR ENGLAND.’

Another said: ‘Why is Maguire awful for United but actually insane for England haha.’

England had raced into a three-nil lead at half-time thanks to goals from Jude Bellingham, Bukayo Saka and Raheem Sterling.

Saka added another one in the second half, before Mehdi Taremi pulled one back for Iran. Marcus Rashford then added a fifth and Jack Grealish a sixth to put England on course for a superb start to their World Cup campaign.