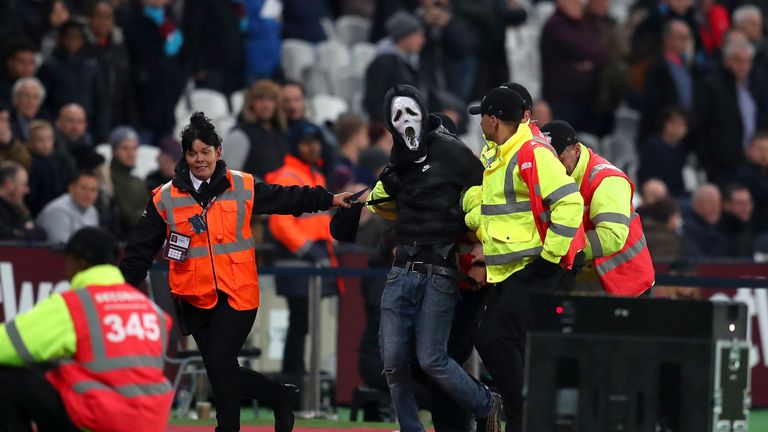 Two male fans have been charged over the disorder during Wednesday night’s Carabao Cup clash between West Ham and Tottenham at the London Stadium.

Hammers and Tottenham supporters clashed inside the stadium during the match, which Spurs won 3-1 thanks to a double from Heung-Min Son.

They are due at Thames Magistrates Court in London on Thursday, November 15.

Six other fans were arrested for offences including racially aggravated public order, affray, pitch invasion, possession of Class A drug and public order.

West Ham said earlier on Thursday in a statement that two incidents of “pitch encroachment” had led to two individuals being arrested and charged by the police.

It added: “Encroaching the pitch is a criminal offence that will not be tolerated by the club.

“In keeping with the club’s zero-tolerance policy, the two individuals will be banned for life from London Stadium with immediate effect.”

Stewards had to step in to separate the supporters as they goaded each other during the match, while one fan ran onto the pitch towards West Ham defender Arthur Masuaku in a Halloween mask.

The Football Association is investigating the fans’ conduct, but club charges, if appropriate, may be delayed following trouble at the Premier League game against Burnley on March 10 at the London Stadium. That case has still to be finalised.

Officials at West Ham have been working through CCTV footage to understand what happened after fans had to be ejected from both the home and away end.