Fabian Schar will miss Switzerland’s European Qualifier against Denmark after the Swiss FA and Newcastle ruled him out of contention following a head injury.

The Newcastle defender revealed he would miss Tuesday’s European Qualifier against Denmark, after suffering a clash of heads in Switzerland’s match against Georgia on Saturday.

Schar, who was left unconscious by the incident, played the entirety of the game despite the first-half collision leading to concerns over player welfare.

“I really wanted to play and, as always, give everything to the team and Switzerland,” Schar told Swiss media. 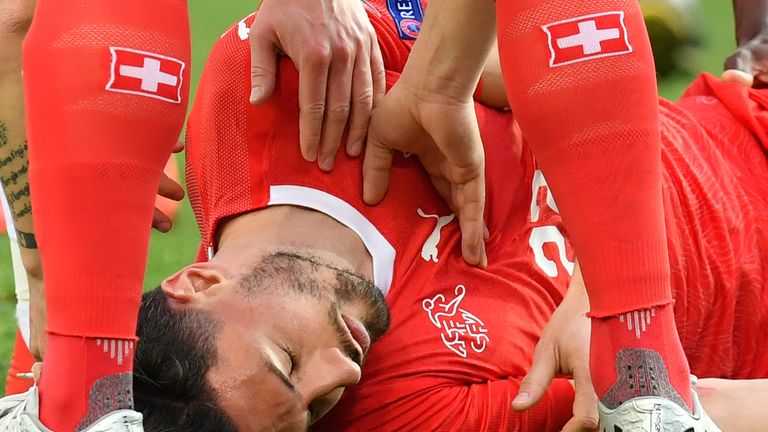 “Returning to the sport after such a collision takes some time, and it usually takes a few days for a player to progressively make an effort, a time that is missing between the two games against Georgia and Denmark,” said Meli.

Brain injury charity Headway had called for a UEFA investigation after Schar was allowed to play on. Schar indicated in an Instagram post that FIFA had taken the decision to block him from playing in the European Qualifier.

But Sky Sports News understands understand FIFA do have recommendations on such matters but ultimately it is the decision of the doctor.

“As you probably know, tomorrow I will not be allowed to play against Denmark,” Schar wrote on Instagram.

“I really wanted to play and, as always, give everything to the team and Switzerland, but unfortunately this time the decision is not in my hands, but was imposed on me by FIFA for health reasons.

“In the game against Georgia I was unconscious for a short time after a collision.

“Anyone who knows me knows how I feel and how much I would like to play. Of course I keep my fingers crossed for the team and I’m convinced that we will have a good game.”

Schar passed a number of concussion protocol tests on the pitch following the clash of heads at the weekend, according to the Swiss FA.

A spokesperson for the association has told Sky Sports News that Schar knew where he was, who he was and what the score was, along with answering a number of mathematical calculations.