Football Australia is in talks with FIFA and officials in Europe about a potential international ban on players who take part in the proposed European Super League, which could see four of the Matildas’ best players – including Chelsea striker Sam Kerr – ruled out of the Olympics and 2023 Women’s World Cup in Australia.

UEFA president Aleksander Ceferin on Tuesday warned any player contracted to clubs taking part in the Super League would not be allowed to participate in European international matches and has asked FIFA to extend those bans to all international tournaments, which would prevent Australian players in the breakaway league from representing their country. 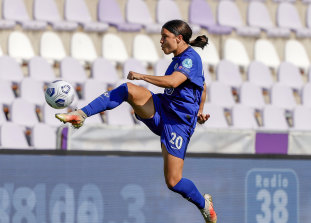 Matildas star Sam Kerr is contracted to Chelsea, which is set to join the breakaway Super League.Credit:Getty

“We are aware of the situation unfolding in Europe and have had and will continue to have discussions with our contacts in European clubland, UEFA and also FIFA as this discussion evolves,” Johnson said. “In the case of our Westfield Matildas and Socceroos, we are one of a few countries outside of Europe which has a significant presence in European club competitions so we will ensure we have our say should this matter be escalated to FIFA.”

Being a member of the Asian Football Confederation, Football Australia must adhere to any FIFA ruling on player eligibility and bans imposed.

However, players who partake in the Super League will be given backing by the global players’ union if they wish to challenge international bans imposed by UEFA or FIFA. FIFPro highlighted their concerns over the Super League proposal but vowed to fight for the right of all players to play international football, regardless of the club to which they are contracted.

“Players continue to be used as assets and leverage in these negotiations. This is unacceptable for FIFPro, our 64 national player associations and the 60,000 players we represent. We will vigorously oppose measures by either side that would impede the rights of players, such as exclusion from their national teams,” a FIFPro statement read.

European courts have previously ruled in favour of athletes participating in non-sanctioned events, with the most notable case relating to speed skating. The International Skating Union sought to ban athletes from non-sanctioned tournaments but lost a court case in December 2020, with the ISU ruled to have breached the EU competitions law.

It is unclear whether players at British clubs participating in the Super League will be able to use European law as a result of Britain leaving the European Union, while any FIFA ban will affect all of its 211 national associations, including Australia.