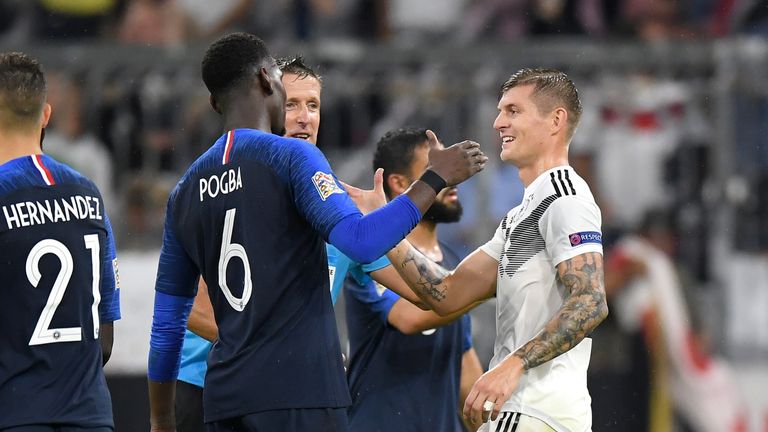 Our friends at Football Whispers are here to round up all the latest news, views and gossip from across the continent.

Real Madrid are prepared to bid for Paul Pogba in January and could offer Manchester United Toni Kroos as part of any deal for the French midfielder. (El Chiringuito)

Athletic Bilbao forward Inaki Williams did receive an approach from Manchester United this summer but says he wasn’t interested in a move to Old Trafford. “My number one option has always been to stay at Athletic Club and to retire here.” (Cadena Ser)

Barcelona director Javier Bordas has said the Spanish club haven’t ended their interest in re-signing Neymar from Paris Saint-Germain. “As long as he wants to come, we will do what we can,” he admitted. (Mundo Deportivo)

Juventus sporting director Fabio Paratici wants to bring Kai Havertz to Turin and could hold preliminary talks with representatives from Bayer Leverkusen when the two sides meet in the Champions League at the start of next month. (Tuttosport)

Genoa forward Christian Kouame – who has previously been linked with a move to Juventus – has signed a new five-year contract with the Serie A side after an impressive start to the 2019/20 campaign. (Tuttosport)

Milan have opened contract talks with Gianluigi Donnarumma. The Rossoneri want the 20-year-old goalkeeper to extend his current deal, which expires in the summer of 2021. (Corriere dello Sport)

Manchester United have scouted Benfica midfielder Florentino Luis but will face competition from Manchester City if they make a move for the 20-year-old. (A Bola) Lucas Piazon says he will quit Chelsea next summer when his loan at Rio Ave comes to an end. “My time at Chelsea is already over,” he said. “I’m tired of playing here and there, I need a place where I can feel at home. (A Bola)

Chelsea are interested in Valencia full-back Jose Gaya and could make a move for the Spain international when the club’s registration ban ends next summer. (Soccer Link)

After he struck four goals in two games for France’s U21s, Celtic forward Odsonne Edouard faced questions about a return to Paris Saint-Germain in the future. “It is the club of my heart,” he said. “For the moment, it [a return] is not really in my head.” (Canal+)

Borussia Dortmund boss Lucien Favre did not want the club to re-sign Mats Hummels as he doesn’t feel the centre-back is suited to playing in a high defensive line. (Sport Bild)