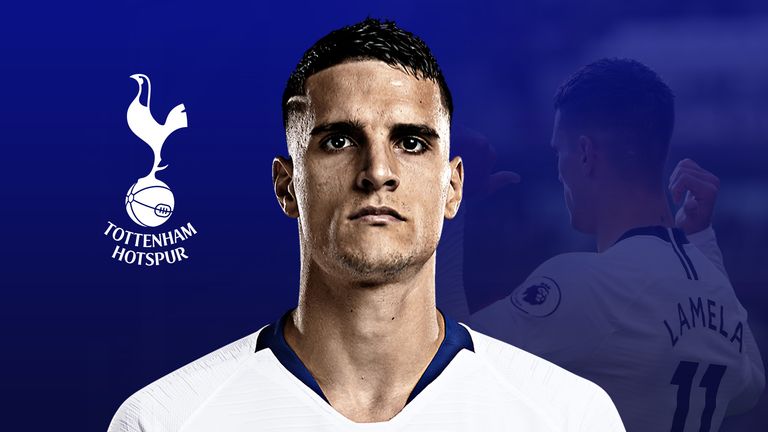 Erik Lamela is in the form of his Tottenham career and is benefiting from playing in a more central role, writes Adam Bate.

After personal problems and injury issues had blighted the previous year of his life, Erik Lamela actually made 33 appearances for Tottenham last season. But only now can it be said that the Argentine is truly back. His winning goal against West Ham was his fifth in seven games, more than he managed in total last season. It is more than a hot streak.

Throw in the assists and Lamela has been directly involved in 10 goals in his last nine matches. For a bit of context, in the Premier League alone he has been involved in a goal every 40 minutes this season – that is the best record of anyone in the competition with Chelsea’s Eden Hazard and Manchester City’s Sergio Aguero next on the list. 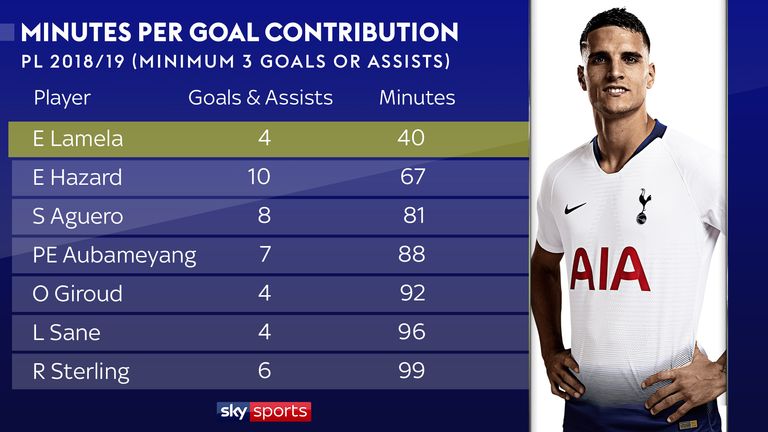 Tottenham team-mate Mousa Dembele described him as “unbelievable” at the weekend. “He’s helping us a lot,” said the midfielder. “Skills, goals, work rate, everything we can ask from a top player like him. Everyone knows he has a strong mentality and that is why he’s improved a lot and you can see he’s so important for us and we always knew this.”

Knowing it and doing it are not one and the same. There has been plenty of sympathy for Lamela in his battle to get back to his best. Missing a year of his career due to a hip injury is one thing. Having to deal with the emotional fall-out from the accident that left his brother in a wheelchair is something quite different. These things take their toll.

Mauricio Pochettino has shown empathy to his compatriot and is still stressing the need for support. “The form of the player sometimes changes,” he explained. “The most important thing is to trust him. We believe in him… The season before last was tough for him, but we showed patience, belief, care about the player, and that I think is the most important thing.”

But another possible reason for Lamela’s improvement is down to how Pochettino is now using him. As a youngster, Lamela expressed a preference to play as a more typical Argentine No 10 but many of his minutes have come in a wider position in a 4-2-3-1. The chance to operate once again as an inside forward is bringing out the best in him. 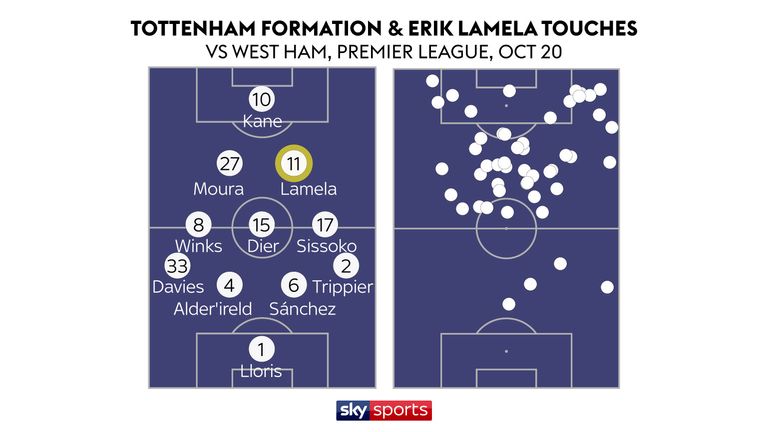 In the absence of Christian Eriksen and Dele Alli against West Ham, Lamela had the opportunity to play more centrally alongside Moura in Pochettino’s 4-3-2-1 formation. The system requires a more selfless approach from Harry Kane with runners going beyond him, but as at international level, the striker is responding to the demands of the role.

With Kane creating more chances – and more space – for his team-mates than before, the onus is on his team-mates to get on the end of things instead and that is what Lamela is now doing. The statistics show that he is touching the ball twice as regularly in the opposition box this season and he is currently shooting three times as often as before as well. At 25, Lamela appears to be showing some of the traits that were so apparent when finishing as the fifth-highest scorer in Serie A during his final year at Roma. He still has the ability to fulfil that potential and he has the physicality too – at West Ham he made more sprints than any other Spurs player despite being substituted with a quarter of an hour to go.

A reinvigorated Lamela is a tantalising prospect for Tottenham because it is precisely the sort of fillip that was required after the ostensible inertia of the summer. That player who could remove some of the scoring burden from Kane never did arrive, but the signs so far this season suggest that perhaps he was already there all along.

Indeed, the focus on new signings can detract from the more significant impact that the change in performance levels of existing players can have on a squad. The most striking example is Moura. He looks an altogether more potent threat having had his first pre-season as a Tottenham player following his January arrival from Paris Saint-Germain.

But Lamela can be put into that category too. Now into his sixth season at the club, it has not been a smooth ride for him at Tottenham and some supporters will want to see this form over an extended period of time before getting too excited. Even so, Lamela’s form is well worthy of praise and he could be a big factor against Manchester City on Monday.