Match report as Demi Stokes and Karen Bardsley errors are punished by Evelyne Viens and Nichelle Prince as Canada condemn England Women to defeat; Lionesses have won just four of their last 14 internationals In what was England’s last chance to impress interim boss Hege Riise ahead of her Team GB squad announcement for the Tokyo Olympics, the Lionesses handed victory to a side who sit two places below them in the world rankings.

A third-minute defensive lapse from Demi Stokes was pounced upon by Evelyne Viens, who gave Canada the lead with a lofted finish over England goalkeeper Carly Telford.

Jordan Nobbs saw a free-kick tipped onto the bar by Canada goalkeeper Stephanie Labbe, and Lauren Hemp was denied a brilliant solo goal by a crucial last-gasp challenge from Vanessa Gilles as the Lionesses failed to get back into the game.

And, with five minutes remaining, their hopes were extinguished when experienced England goalkeeper Karen Bardsley failed to clear the ball on her goal-line and Nichelle Prince bundled the decisive effort over the line.

Lionesses contribute to their own downfall 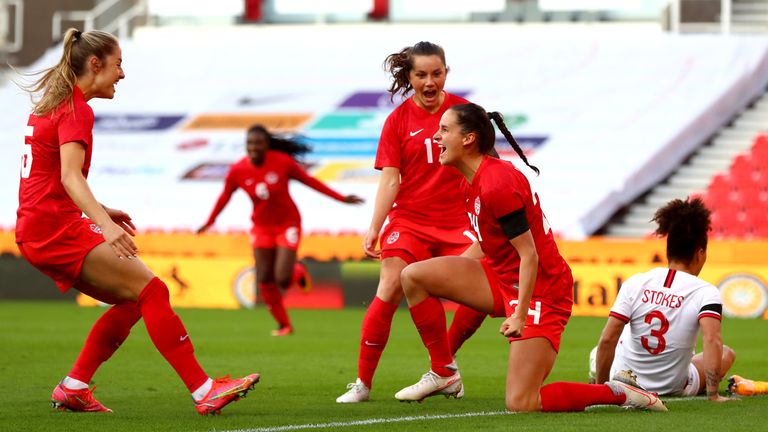 England were keen to respond to to Friday’s 3-1 defeat to France but found themselves behind inside three minutes.

Janine Beckie played a through-ball to Veins, who was coming back from an offside position, but England defender Stokes intercepted it, lost control, and gifted the ball to the Canada striker who converted past the exposed Telford.

Georgia Stanway saw two tame efforts go wide in the first half, including an audacious effort from range as she spotted Canada goalkeeper Labbe off her line.

Nobbs came closest for the Lionesses when her free-kick on the edge of the box was tipped onto the crossbar by Labbe.

The second half saw England enjoy most of the possession, introducing the likes of Ella Toone, Bardsley, Chloe Kelly and Lucy Bronze, who were all looking to impress Riise ahead of her squad selection for Team GB, but chances were limited and Canada were rarely threatened. It took England until the 80th minute to come close to getting back into the game, but Hemp was denied a brilliant solo goal by a crucial last-gasp challenge from Gilles.

Canada wrapped up the victory when Prince capitalised on another lapse in concentration to score a second. Substitute goalkeeper Bardsley failed to clear a back pass from England captain Millie Bright, and Prince blocked the clearance and bundled the ball in on the goal-line.

Despite the threat and creativity in midfield, with the likes of Nobbs and Stanway impressing, England were unable to capitalise and Canada saw out the game to secure the win.