England expects! After years of simply hoping for the best, Gareth Southgate’s confident side are now settling for nothing less and anticipate greatness after making real progress

It is the hope that kills you – a feeling the England football team are all too familiar with. But when that hope evolves into expectation, you know you’re in business.

England are in the middle of that transformation. No longer a team hoping for the best, but rather one anticipating greatness.

England’s fourth-placed finish at the 2018 World Cup provided promising signs, and this summer’s runners-up spot at the European Championship substantiated that promise. 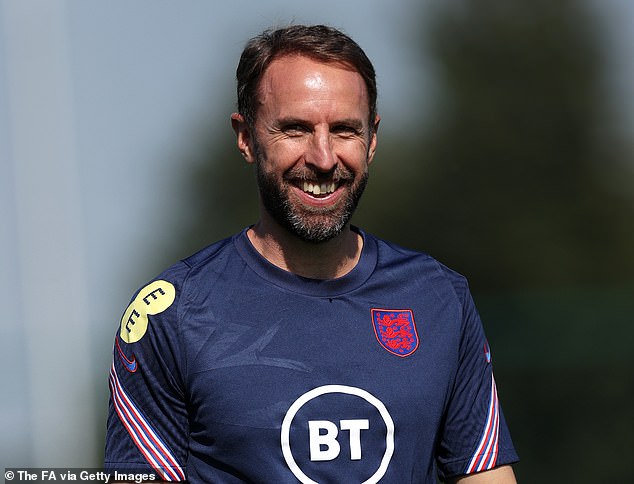 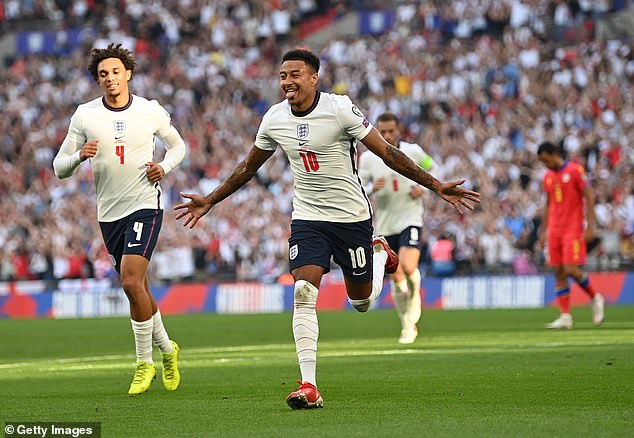 That’s real progress, though winning a trophy for the first time since 1966 would be the most significant step of all.

Gareth Southgate believes it is one his team are ready to make.

‘Without a doubt there’s that confidence in the team, which can only come from being able to achieve performances that have led to those results,’ said the England manager. 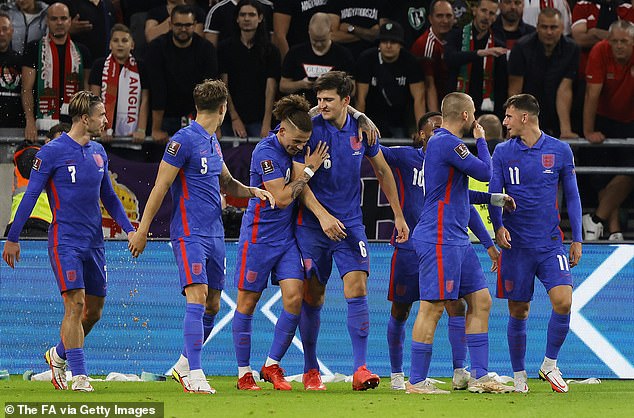 ‘We saw that in Hungary (the 4-0 win), the way they approached the game, the belief, but also that bit of additional motivation from not having quite got to where we wanted to as well. That’s a good position for us to be in.’

England’s position as the hunted, rather than hunters, ensures a stern test in Poland.

Prior to 2018, England would have viewed a point away in Warsaw as a positive result. Anything but victory will be viewed as a disappointment now.

England appear to be in a sweet spot – and Southgate knows it, too. Yet his team’s swagger comes with a risk, one the England chief was at pains to point out yesterday.

‘Any slipping of those standards, any suggestion we can win matches by taking our foot off the gas, we’ll be in trouble,’ said Southgate. ‘The level of competition is too high. The test of any match gives you different problems to solve during the evening.

‘While it’s enjoyable to be with this team at the moment, that can also be a dangerous moment if we allow standards to slip in any way.’ 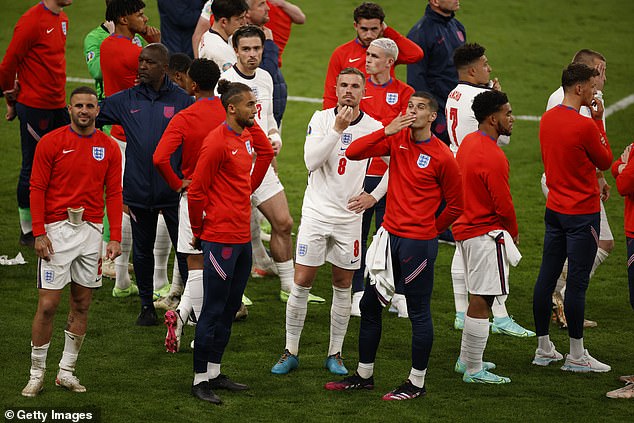 You would imagine Southgate does not need to worry. Having tasted domestic and European success with their clubs, this team are desperate to win arguably the biggest prize of all.

But while the England dressing room boasts multiple Premier League and Champions League winners, their captain continues to yearn for his first professional trophy.

In many ways, Harry Kane has it all. Yet, he doesn’t have what he most desperately wants. 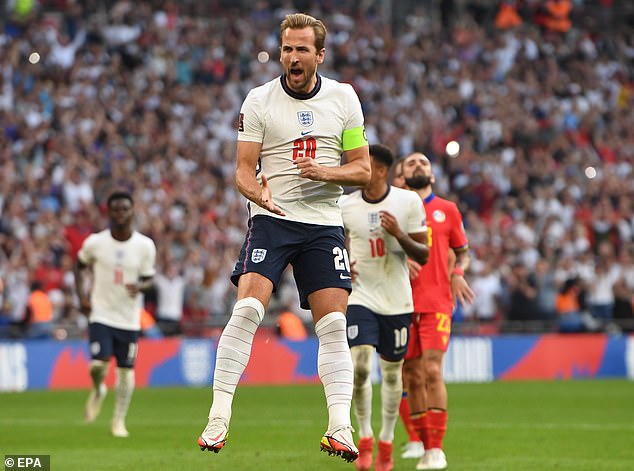 Tottenham have started positively under new manager Nuno Espirito Santo and, who knows, perhaps Kane can finally end his drought this season.

Nevertheless, Kane’s next best opportunity to win a major trophy will be in Qatar with England in December 2022. At 28, time is on his side.

Poland striker Robert Lewandowski, 33, is showing no signs of slowing down. Ten goals in his opening six games for club and country this season – in addition to his 56 strikes in 50 appearances last term – tells its own story.

And Southgate believes Kane is cut from the same cloth. ‘There is every chance Kane will go as long as possible because he’s an incredible professional,’ said the England boss. ‘Normally those things are determined by how you look after your body, what you eat, how you prepare. 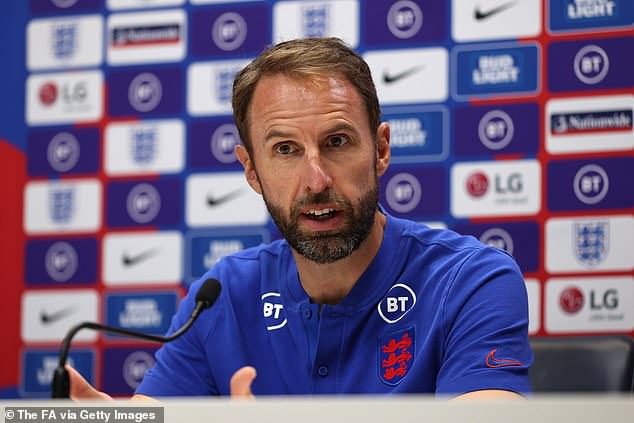 ‘He’s going to do that and that’s going to give him the best chance. The two of them, probably with (Romelu) Lukaku, are the ones that immediately spring to mind when you talk about players who are a focal point of the team, as a No 9, with the goalscoring records that they have.

‘They all play slightly differently, although I see a lot of comparables with Lewandowksi and Kane in the way they come deeper, play team-mates in, play those excellent passes as well as their range of finishing.’

Kane will return to England’s starting line-up expecting to add to his 40-goal international haul as he edges towards Wayne Rooney’s all-time record of 53.

Having made changes for Sunday’s 4-0 win over Andorra, Southgate is expected to revert to the team who thrashed Hungary last Thursday. 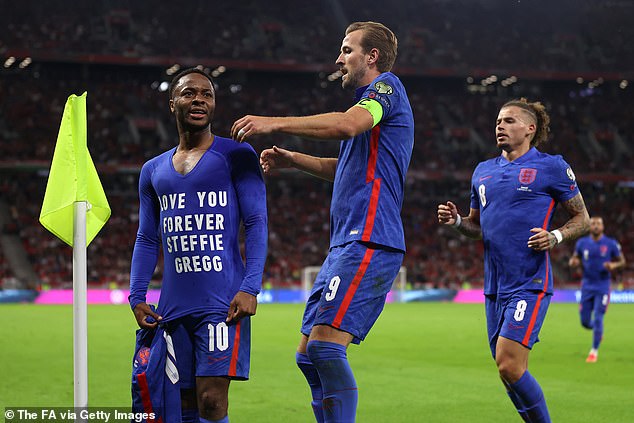 It bodes well for England’s future that Southgate has a settled starting XI, though the nature of international football means you’re only two injuries away from going back to the drawing board.

He added: ‘We’ve obviously been to a final of a competition. There was an element of stability about that team which is exactly the same as all the major countries really. 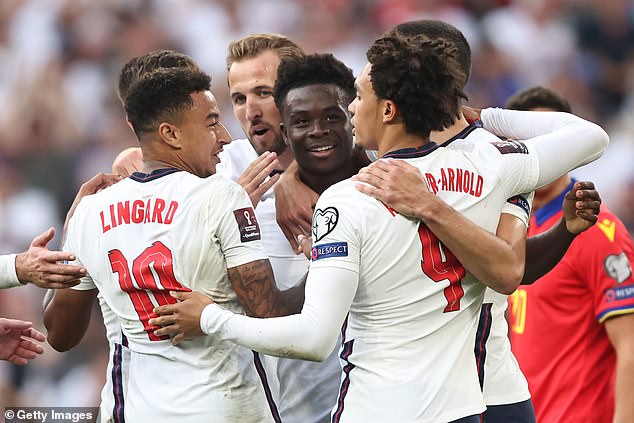 ‘We were constantly having to chop and change because we never had people fit. It’s been great to have that stability of selection.

‘The lads who are in the team know that there are very good players in the squad to challenge every day in training and if there is any dip, they are there.

‘The players out of the squad know they’ve got to fight to get into the team and that’s what happens with successful teams.’