With England’s hopes of qualifying from their Nations League group over, attention now turns to next summer’s Euro 2020 tournament and who makes it into Gareth Southgate’s best XI.

Our team of writers have picked their strongest England sides for the competition below.

Read on to see who they’ve chosen and why, then use our team selector to pick your best England XI. 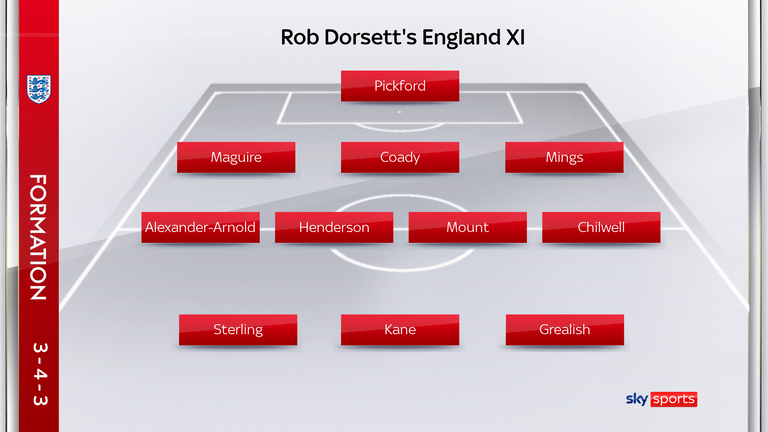 I can only judge Jordan Pickford on his form for England, which has been outstanding, so he gets the nod in goal. I like the three centre-back system because it allows England’s wing-backs to bomb forward with much greater feeling of security. For me, Conor Coady and Tyrone Mings – who play that system weekly with their clubs – are the outstanding players to partner Harry Maguire, and in those three you have three vocal leaders as well.

Raheem Sterling and Harry Kane pick themselves, and it’s a huge call to leave Marcus Rashford out, but I’ve long been an advocate for Jack Grealish in this England side, and his performances for his club and country have made me even more convinced he has to be in the starting XI. He is the X-factor that England have needed for so long, though this team does need the pace of the wing backs and Sterling to offer the penetration that was lacking against Belgium. 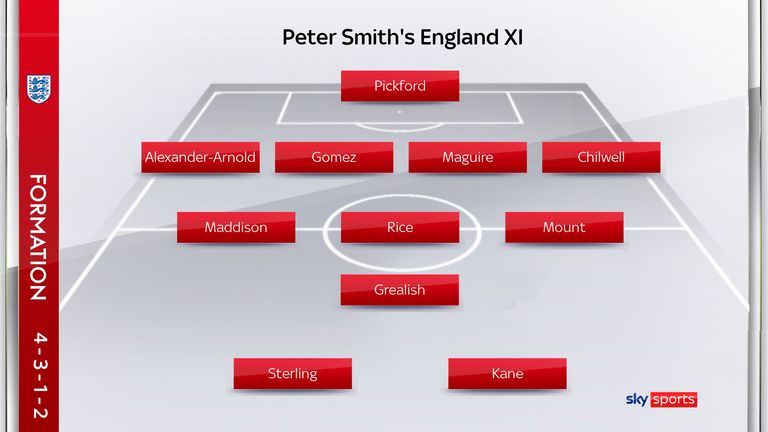 If his form is steady by the summer, Jordan Pickford’s tournament experience keeps him in goal – but the three-man defence has to go. We need players playing where they’re comfortable and at their best. That’s right-back for Trent Alexander-Arnold, Joe Gomez – fingers crossed he’s fit – and Harry Maguire as a pair, with Declan Rice anchoring the midfield. James Maddison and Mason Mount have the all-round midfield skills, creativity and drive to join the attack needed as No 8s.

Jack Grealish must be in the XI – and he needs freedom to float across the pitch. With attacking full-backs, we can swap wide forwards for central strikers in Raheem Sterling and Harry Kane. The Man City man can provide pace in behind and pick up positions where he can finish from between the width of the posts, while Kane brings the link-up play and his own goal threat from higher up the pitch.

Kate Burlaga – James or Trent? Both! With Trent in midfield… Too much is made of formations at times but, Gareth, it’s time for 4-3-3; a system to embolden, not inhibit, the attacking talent at your disposal. The Grealish clamour is justified – but he’s playing where he thrives, staying high up the pitch, cutting in from the left flank. Raheem Sterling is efficient off the right and, given Harry Kane’s tendency to drop in and link, should still pop up to poach in more central areas, too.

Jordan Henderson’s energy and experience is complemented by the tenacious, technical Phil Foden and – I’m going for it – Trent Alexander-Arnold in front of the impressive Reece James. With questions over Joe Gomez’s fitness, Conor Coady gets the nod in defence: he’s proven he can adapt to a back four and, in my book, is the best all-rounder in that position right now. Dean Henderson in goal when – for now at least – he’s sitting on Man Utd’s bench? Yes. He’s a terrific, agile shot-stopper – with the character for the big stage.

Adam Bate – Henderson can hold it together while Foden, Grealish play 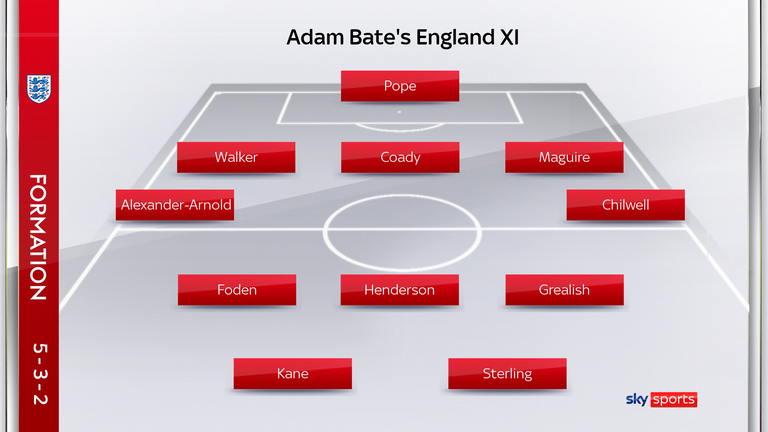 I am sticking with a back three. It is a conservative setup but having men behind the ball is how tournaments are won. Nick Pope edges it in goal – commanding the box is a more important quality in a goalkeeper than kicking ability. Kyle Walker is needed for pace, while Conor Coady brings a range of passing. Trent Alexander-Arnold and Ben Chilwell are in at wing-back, although Reece James and Bukayo Saka are pushing them hard.

A double pivot in midfield feels unnecessary with three centre-backs so I would hope Jordan Henderson could hold it together with Phil Foden and Jack Grealish both capable of carrying the ball from deep. Harry Kane and Raheem Sterling are the key men up front but there is enough flexibility here to switch between 3-5-2, 3-4-3 or even become a back four. There is pace on the bench to change things up too. European glory, here we come…

Lewis Jones – Wan-Bissaka as part of the three? Why not?! 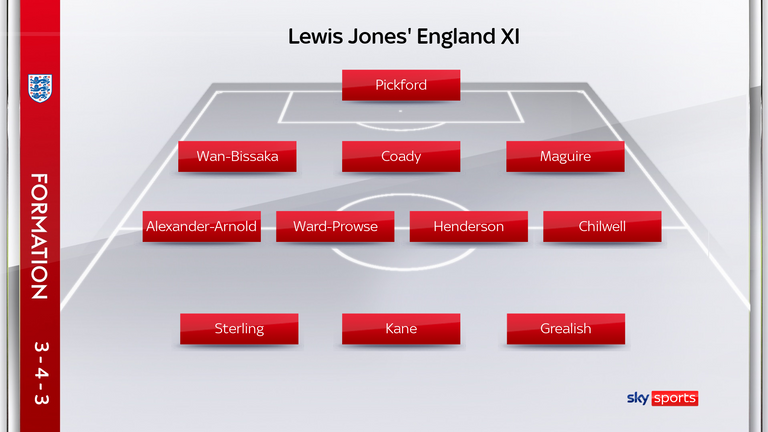 Defensively, I worry about England shaping up with four at the back, so for tournament football playing with three centre-backs makes sense in terms of balance and protection. Plus, playing off the left of a three looks like Harry Maguire’s most comfortable position. Conor Coady performs week-in, week-out, at a top club in the Premier League in the middle of a three and has shown enough to be relied upon at international level.

The mind boggles however as to why Gareth Southgate hasn’t even had a look at Aaron Wan-Bissaka as the right sided centre-back. He’s positionally excellent, tough to pass on one-on-ones and shoehorning Kyle Walker into that role just hasn’t worked. Something we knew at the World Cup. I’d love to see Wan-Bissaka slot in there.

The wing-backs pick themselves although Reece James could challenge Trent Alexander-Arnold over time. With England’s threat from dead balls one of our most potent weapons, James Ward-Prowse, who is flying with Southampton, offers more in that role than Declan Rice to my eye. The pairing of him and Jordan Henderson may lack a bit of guile but their energy and bite shouldn’t be underestimated. The furore surrounding Jack Grealish is justified. His bravery on the ball is something England have lacked when the going gets tough in tournaments whilst Harry Kane and Raheem Sterling simply can’t be left out.

Jack Wilkinson – Remember Russia? Get back to the World Cup set-up 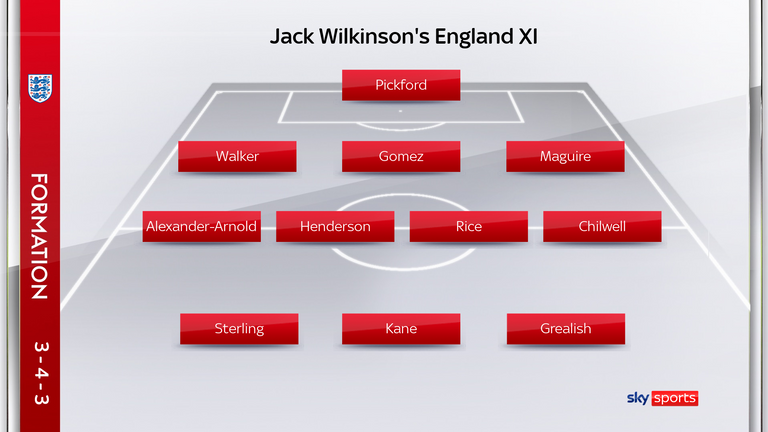 With proven tournament experience and a lack of competition, it’s really hard to look beyond Jordan Pickford starting in goal at Euro 2020. Having shied away from the formation that brought success at Russia 2018, it’s time for Gareth Southgate to return to a three-man defence, with Harry Maguire, the rejuvenated Kyle Walker and, fitness permitting, Joe Gomez providing balance across the back line.

With the added protection of Walker’s pace behind him, Trent Alexander-Arnold’s attacking prowess to come to the fore from wing-back, with Ben Chilwell on the opposite flank of a midfield pairing of Jordan Henderson and the ever-improving Declan Rice.

Harry Kane is the first name on the teamsheet and, if he can maintain his fine recent form, Jack Grealish isn’t far behind. Then it’s a toss-up between Raheem Sterling, Marcus Rashford and Jadon Sancho, and the Manchester City forward just edges it at this moment in time. 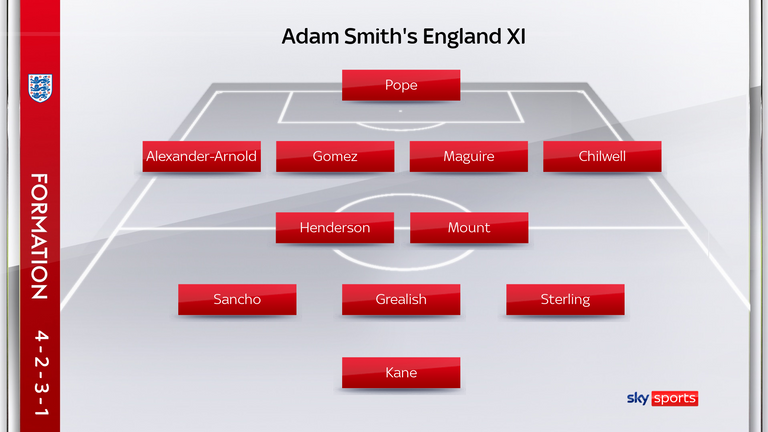 England may have lost 2-0 to Belgium, but I was still left with a buzz of excitement, the kind that has evaded me after most wins in the past. Jack Grealish epitomised why most of us watch football – for enjoyment and forward-thinking endeavour and the hype surrounding him appears entirely warranted.

As has been the case so many times in the past, England have a squad of world beaters on paper and I would love to see them unleashed in a formation to accommodate that quality. Yes, I’ve dropped Mason Mount into a midfield two – but he ranks among the elite at Chelsea for duels, recoveries, interceptions and tackles and could do a job alongside Jordan Henderson.

The only selection headache was leaving out Marcus Rashford, with Jadon Sancho, despite his recent form, accustomed down the right – but James Maddison and James Ward-Prowse were also on the fringes.

Ben Grounds – How to harness Kane… Jordan Pickford remains Southgate’s undisputed first choice. The manager has been stubborn in road-testing a 3-4-3 formation during the Nations League, seeking to protect an area of perceived weakness by deploying three centre-backs. But in moving away from the more adventurous 4-3-3, England’s wealth of attacking talent has been inhibited.

In the five competitive fixtures since September, his side have managed just one goal in open play, failing to score in three of those games. The emergence of Jack Grealish offers Southgate a way out from the defensive stodginess, and beyond the highlights reel lay the key to England’s hopes of ending 55 years of hurt: how to get the best out of Harry Kane.

Southgate needs to make bold decisions – namely at right-back – but seven months before a major tournament, the time for experimenting is over. England’s greatest strength undoubtedly lies in attack so in spite of issues finding a solid defensive pairing, 4-3-3 does the job of getting England’s best forward players into the game in their best areas.

Kalvin Phillips has proven a strong prospect as a defensive midfielder and with Premier League football under his belt and exposure at international level, looks a better bet to get England on the front foot with the ball than Declan Rice. Jordan Henderson’s energy and organisation would protect the back four, and after Jack Grealish’s recent performances for club and country, I would like to see him driving at defences with the movement and options that front three provides.

Jordan Pickford has been a good servant who I’ve long defended but I’m not convinced he’s England’s best option now. If Dean Henderson were playing for his club he’d have a strong claim, but Nick Pope has already made more appearances for England than Pickford had going into the last World Cup and there’s still time to give him more experience before Euro 2020.

You’ve seen our selections, now it’s time to pick your own…