Emile Smith Rowe attracted plaudits for the assist that allowed Bukayo Saka to score Arsenal’s second goal against West Brom on Saturday night but it was his pass moments earlier that best summed up what he has brought to Mikel Arteta’s side.

The 20-year-old had already spotted the space opening up in front of him when he received the ball from Hector Bellerin in the middle of the West Brom half. Using the inside of his right boot, he steered it into the feet of Saka, bypassing Romaine Sawyers and Conor Gallagher with one touch and sprinting forward as he did so.

Suddenly, Arsenal were away. Saka turned and laid the ball off to Alexandre Lacazette, who then directed it back into the path of the onrushing Smith Rowe. The West Brom box was breached. Smith Rowe picked out his fellow academy graduate for a second time and the ball hit the back of the net. Two-nil Arsenal.

It was a scintillating team goal. The ball travelled through seven Arsenal players from the start of the move to the end of it. But it was Smith Rowe who carved the opposition open, his speed, vision and anticipation turning a promising passage of play into a deadly one.

They are qualities this Arsenal side has sorely lacked this season.

All too often in the first half of the campaign, their approach play was ponderous; their passing predictable. Arteta’s men struggled to create scoring opportunities let alone take them. In fact they struggled to even move the ball into the final third.

The lack of spark raised questions of the decision to omit Mesut Ozil. Surely a playmaker of his ability was a perfect candidate to solve the side’s creative problem? Instead, however, it appears the solution has come from a younger model.

Until Boxing Day, Smith Rowe had not played a single Premier League minute this season, his appearances limited to the cup competitions as he recovered from a shoulder injury and Arteta opted for more experienced players in the bigger games.

Since then, however, he has started three times in a week, his performances at the tip of the midfield helping Arsenal claim three consecutive Premier League wins for the first time since July. His introduction is not the only factor behind their recent improvement but it is certainly a significant one. “Team looks good with a No 10 like Emile Smith Rowe,” wrote Ozil, rather pointedly, on Twitter on Saturday night. “The difference-maker,” he added.

Ozil had just watched Smith Rowe follow up his fine performances against Chelsea and Brighton with an even better one at the Hawthorns. As well as playing the pivotal role in the second goal, he was involved in the build-up to Kieran Tierney’s opener and had the shot which preceded Alexandre Lacazette’s third.

As in the previous two games, however, it was his overall contribution that benefitted Arsenal most.

The Croydon-born youngster, an Arsenal player since the age of nine, plays without inhibition, speeding up the game in ways that are simple but effective. A one-touch pass here. A drop of the shoulder there. He is always on the move.

“He could find space in a telephone box,” said Danny Cowley, his manager on loan at Huddersfield Town last season.

That ability to seek out spaces takes him all over the pitch. Indeed, his role in this Arsenal side is not just to provide a creative presence at No 10, but to interchange positions with his fellow forwards, making himself available to receive a pass anywhere across the front line, then play the next one swiftly and incisively. 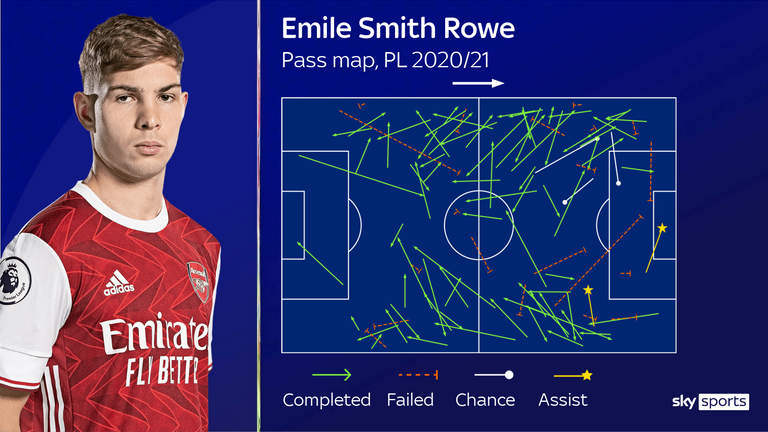 The best example of that link play on Saturday came in the build-up to Arsenal’s second goal but there was another just a few minutes later, when he released Tierney with a cushioned ball on Arsenal’s left, then charged into the box and played a one-two with Lacazette, whose deflected effort almost crept in.

By the end of the game, Arsenal had attempted more shots than in any other Premier League game under Arteta (21), registering their highest total on target (12) since a meeting with Manchester United in December 2017.

“I’m so pleased because in the final third, we looked so lively,” said Arteta after the game. “There is a lot of movement, there is good energy, there is purpose, and everyone is playing forward. It’s like we are freer to play and we are able to generate a lot of things there.”

It owes a lot to Smith Rowe’s willingness to take risks. They don’t always come off for him but he brings persistence as well as purpose. Since Boxing Day, no Arsenal player has attempted more dribbles. Only Tierney has created more chances. 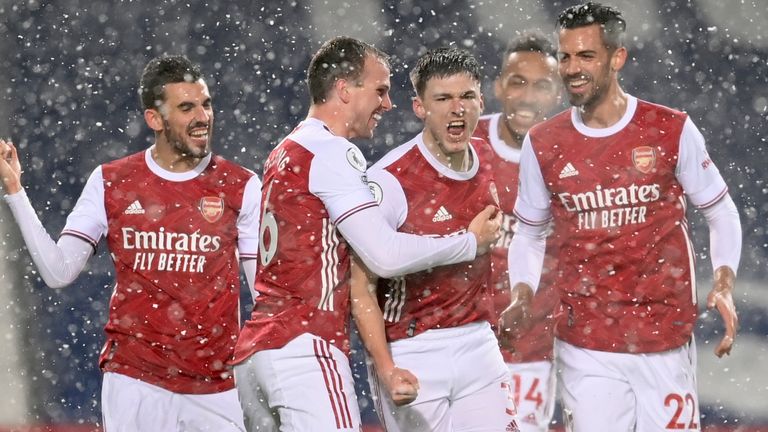 Crucially, Smith Rowe contributes defensively as well as offensively, chasing down opponents, winning back possession and, at one point in the second half at the Hawthorns, even popping up on the edge of his own box to make a crucial interception from a Dara O’Shea pass.

His work-rate is one of the qualities Arteta likes most about him and it was certainly evident at the Hawthorns.

At the time of his substitution, Smith Rowe had covered more ground (10.1km) than any other Arsenal player, according to Premier League tracking data. He had also recorded the most high-intensity sprints (13) and even the highest average speed (7.71km/h).

It’s just a shame he missed out on the applause of a packed away end when he was substituted towards the end of the game. But recent evidence suggests there will be plenty more opportunities for that. Emile Smith Rowe had to bide his time for an opportunity this season. Now, though, it seems he’s here to stay.