Arsenal will be looking to secure a fourth successive win in the Premier League after a torrid start to the campaign when they host Crystal Palace live on Sky Sports this Thursday. So what’s changed?

The Gunners crashed to 15th in the league table during mid-December after a run of five defeats and two draws, a run that began with a surprise 3-0 defeat at Aston Villa and was compounded by losing the north London derby.

But three league wins on the bounce and the rise of numerous youngsters has lifted them into 11th and produced a significant upturn in form and mood.

So what’s behind the transformation? Indeed, the impact of academy talents Emile Smith Rowe and Bukayo Saka have been catalysts – but Mikel Arteta has made some beneficial tactical tweaks, too.

“The FA Cup win over Newcastle was not the greatest of games, but Arsenal got the job done and they get to the next round, and continue building that confidence they have picked up over the past few weeks.

“I think some of the performances from players that came in, Willian and Nicholas Pepe, probably reiterated to Arteta what he knew already – he has to stick with the youngsters who have made such a dramatic impact.

“Smith Rowe and Saka came off the bench and they injected some much-needed urgency into that Arsenal display, just as they have done in the league and Kieran Tierney was excellent again.

“The youth has delivered energy into the side. Smith Rowe’s ability to get between the lines and receive the ball on the turn and move the ball quickly has been an important factor in Arsenal’s resurgence.

“And what can we say about Saka? He gets better with every game. He is taking the pressure on his shoulders and delivering.”

Attacking crosses on the rise

Arsenal set a season league record during their derby defeat against Spurs by attempting 44 crosses. But, with no rewards from those efforts, that approach led to some criticism.

Before December, the Gunners ranked sixth for their frequency of crosses and mid-table for the number of attackers getting into the box for crosses, according to new Opta Insights data.

But, since the start of December, Arsenal rank fourth for frequency of crosses and top for the number of players getting into the box when crosses are made – a number that has been rising since the defeat to Spurs.

But, despite being among the most prolific sides for crossing, the Gunners have still failed to score one header since the turn of December, represented by the size of points in the graphic above.

Indeed, the Gunners have only mustered three headed goals in the Premier League this term – considerably fewer than big-six rivals Liverpool, Chelsea (both eight), Manchester United and Tottenham (both five).

So there is certainly room for improvement in offensive aerials but the crosses have still contributed to more shots and touches inside the opposition box and, ultimately, more goals – the product of a more offensive approach.

“Alexandre Lacazette has come into some red-hot goalscoring form recently and his link play has been really important for the team in the past few league games.

“There is the question about whether Pierre-Emerick Aubameyang should play through the middle, should it be Lacazette? But I do not think you can make any arguments at the moment against Lacazette starting ahead of Aubameyang in the central role. 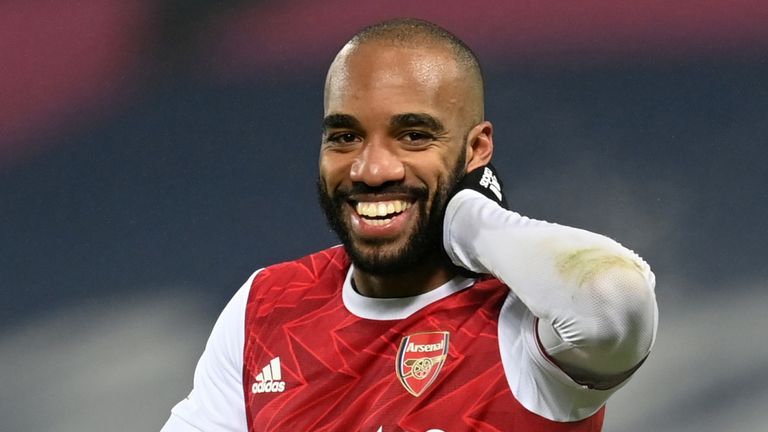 “He holds the ball up better and, as we saw with his flicked header for Smith Rowe’s goal – I do not think Aubameyang would have done that. So he has been another crucial part of this resurgence.”

Arteta’s growing emphasis to commit players in attacks coincides with his shifting preference from a five-man defence to four – having started seven of his past nine league games in a 4-2-3-1.

As the graphic below reveals, that switch has added an attacking midfielder in advanced areas and helped push the central striker upfield. As a result, the Gunners’ attacking and possession metrics have all increased since December. 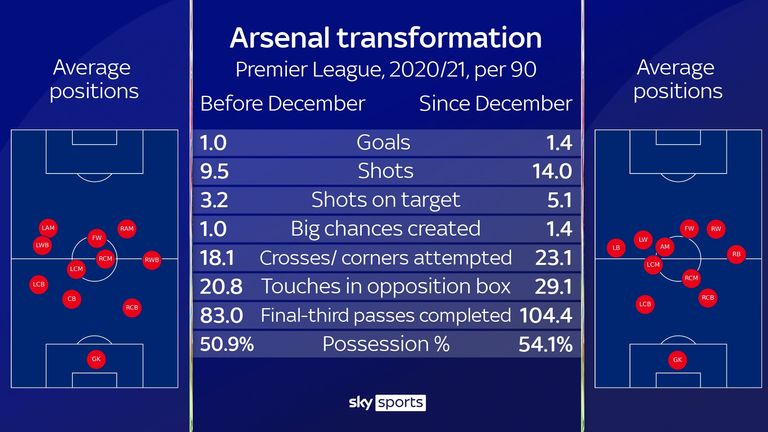 “Energy is the blueprint for Arteta. It’s no secret he likes the press and high energy. It had disappeared this season for some reason. They had that brilliant performance against Manchester United but it just dropped off.

“The fans were crying out for this injection of youth and it did not come. But then it happened because of the coronavirus scares when David Luiz and Willian were unwell. Arsenal stumbled on a formula.”

The Gunners rank third in the Premier League with their average distance of 110.8km covered per game – behind only Leeds (114km) and Sheffield United (112.6km) – and top among ‘big six’ clubs.

That coverage by matchday may appear slightly sporadic, but there was a clear dip in distance covered during their torrid run between matchday six and 13, but has surpassed 110km in the four games since.

In terms of the players, the youthful energy of Tierney and Saka has certainly contributed to the sustained physical exertions in recent weeks, ranking among the elite for distance, sprints and top speeds.

“It looks like the end of an era with Mesut Ozil’s time at Arsenal coming to an end. We are getting cryptic tweets from him, hinting of a move to Fenerbahce. It’s certainly going to be a complicated deal to get done.

“Ozil is adamant he will not leave Arsenal before the end of his contract. If we take him for his word, then he will have to be paid up. But I think it will be good for all parties if they can get this deal done. There needs to be a clean break. 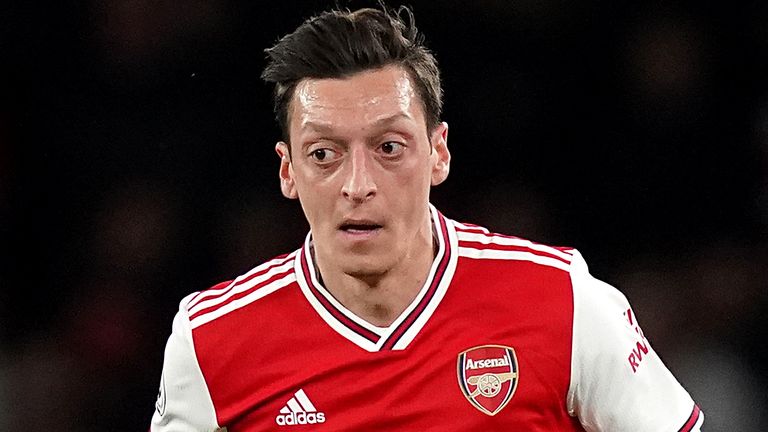 “Arteta rightly said, Ozil’s legacy is a good one at Arsenal. His arrival helped return silverware to the club and some of the football he was involved in was sublime but things have unravelled since Arsene Wenger’s departure.

“Ozil’s stats have declined. Three managers have not picked him. He also splits the fan base right down the middle and it has come to a head under Arteta, who initially gave him a chance.

“Now he does not seem to fit into those plans and Arsenal really need him off the books. It cannot be healthy he is at the training ground with no chance of playing. The best result for both parties is he leaves the club.”

There’s more Man Utd analysis on the Pitch to Post Preview Podcast, including their FA Cup win over Watford, why resting Bruno Fernandes in that game could be important, and whether Donny van de Beek boosted his chances of more first-team action.

Plus we look ahead to other standout midweek games, including Arsenal’s clash with Crystal Palace, Sheffield United vs Newcastle, and we get the latest on the coronavirus situation at Aston Villa.