England and Manchester City goalkeeper Ellie Roebuck has described the situation faced by Birmingham Women’s players as “unacceptable”, following their complaints to the club’s board over facilities, travel, and budget restrictions.

The Football Association is looking into whether Birmingham may have breached their Women’s Super League licence after Blues players sent a letter to senior figures at the club last week, which stated that some of their working conditions are preventing them from doing their jobs “to the best of their ability”.

The club refused to comment on the matter to Sky Sports News but in a response to the Sunday Telegraph, Birmingham have said they are doing their “best on and off the pitch”, amid challenging circumstances caused by the coronavirus pandemic, to keep the men’s and women’s teams in their respective divisions this season.

A number of WSL players, including Chelsea’s Fran Kirby, Arsenal’s Leah Williamson and her team-mates Beth Mead and Katie McCabe, spoke out in support of Birmingham’s players on Sunday when the story became public knowledge. 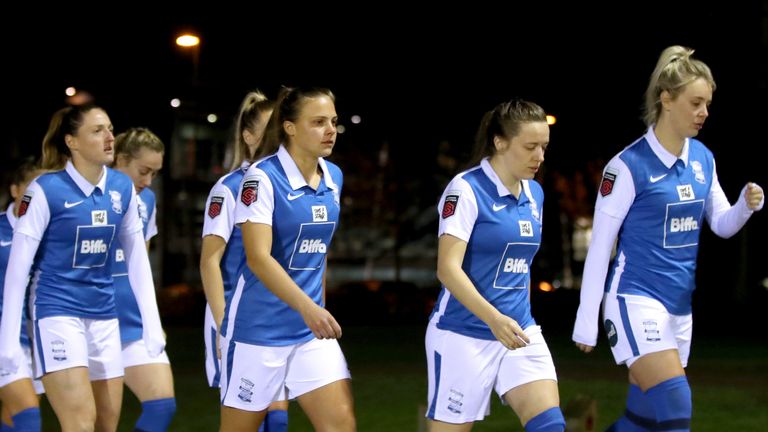 When asked about the issue prior to England’s friendly against France on Friday, Roebuck said: “I think now we are at a level in the women’s game where that is totally not acceptable.

“I am not close to Birmingham to know the ins and outs of that detail but having been looking from the outside, that is not good enough.

“Personally I count myself really lucky that I’m at a club like Manchester City where everything is top level and the equality throughout the building is top drawer, and coming into the England camp we have the same facilities and same luxuries, so we are really lucky.

“But I think the way the league is going and the steps it is making to improve, I think we all need to be at a level which can help the girls perform to the best of their ability.

“So I think if they can have improved facilities then that will help not only the growth of the game but also the growth of the individuals to thrive in that environment. It’s totally unacceptable and I hope the situation can get resolved.”

Arsenal’s Lotte Wubben-Moy, who could earn her second senior cap in England’s upcoming games against France and Canada, added: “Without a doubt to I empathise [with Birmingham’s players].

“What they are going through is something I cannot comment on because I am not a Birmingham player but the only comment I can really make is that I respect them for speaking out.

“It is an important part of their [Birmingham’s] development as a club that their voices are heard and I hope the board of directors obviously take into account what they are saying.”

Chelsea centre-back Millie Bright, who recently helped her side reach the Champions League semi-finals, admitted it showed more work is required at all levels of the women’s game.

She added: “I am gutted that the players are having to experience what they are and hopefully something is going to change moving forwards.

“Overall in the women’s game we still need to make improvements like this and it shows where the game needs to get to.” Roebuck, who could earn her seventh senior England cap in the Lionesses’ April friendlies, says working under interim head coach Hege Riise has been “really positive” and she admits there is a high degree of competition among the squad, as players look to impress ahead of the Team GB Tokyo Olympics squad selection, prior to the Games later this year.

“Naturally the level of competition is going to be high because of the depth in the squad and if you look at every position pretty much there is always competition for places,” she said.

“She [Riise] is a great coach. I think it was difficult with the last camp obviously with Covid restrictions and everything it makes it difficult to get to know a person when meetings are done virtually.

“But from what I’ve gathered through her methodology and everything, it is all really positive.

“Just getting out there on the grass and being out there and enjoying what we are doing has been a key thing. A lot of the tactical and technical details have been really good for us to understand. It’s really good and I’m really excited.” Defender Wubben-Moy is eager to showcase her ability at centre-back with captain Steph Houghton absent from England’s squad for the two April friendlies because of an injury.

The skipper is a player who Wubben-Moy, 22, wants to emulate as she aims to force her way into Riise’s thoughts.

She said: “Credit to Steph Houghton, she is an amazing player I look up to her and that is the kind of player that I try to benchmark myself upon.

“An opportunity is there for us younger players, you never wish injury upon anyone but that is football, isn’t it. I relish these opportunities.

“I am lucky to be playing at Arsenal and hopefully I can bring through what I am learning there and push that on the pitch with England.”