Not content with becoming the youngest head coach in Australia’s top division before guiding New Zealand to the Olympics, Des Buckingham is also a qualified pilot. Asked by pals on his 30th birthday what he would be doing if he were not in football, that had been his first thought.

“They took me up in this little aircraft and the guy up there sold me on this package. Over a two-year period I went through 100 hours of lessons, six theory exams and a flying test. If I had known the work involved I wouldn’t have gone near it because it was substantial.”

It is typical of a man in a hurry. Buckingham, perhaps the best British coach you have never heard of, has already achieved plenty. While on the other side of the world, he has also led New Zealand to unprecedented success at the U20 World Cup.

Now 36, his latest role is within the City Football Group as an assistant coach with Melbourne City in the A-League. Having been identified by that organisation as one of the more forward-thinking coaches in the game, the journey for Buckingham is just beginning.

And yet, it has already been a lengthy one. While former players of a similar age are just embarking on their coaching careers, he has been doing it now for half of his life.

“I did two part-time jobs. I was lecturing at college in Oxford when I was 21, teaching 16 to 19 year olds. That was my day-time gig. In the evenings, I was working at what was then the centre of excellence and is now the academy. It was enough for me to get by on.”

An Oxford education is always prized but in Buckingham’s case it brought him into contact with Chris Wilder – spending two seasons as a first-team coach under the now Premier League manager. It was an eye-opening experience for someone so eager to learn.

“As soon as he came in he was really clear but it was the two years travelling with him and spending time with him that I really saw it up close. His football knowledge is unbelievable but it was the way that he managed the people he worked with.

“He was very clear and very honest but the relationships that he struck up with those around him was unbelievable. He trusted people and I am convinced that has been the key to his success every bit as much as his football knowledge. It was a fantastic time.”

The turning point in Buckingham’s career came when the auditors arrived at Oxford to evaluate the work going on in the academy as part of the Elite Player Performance Plan.

“At the end of the four or five days, the guy who was leading the audit pulled me aside off the record and asked me what it was that I really wanted to do,” he tells Sky Sports.

“He had been observing me with the youth teams. I was head of coaching too, overseeing the playing and coaching philosophy. I was the NVQ tutor delivering the education to the scholars in the afternoons and I was with the first team in the mornings.

“So I was doing four or five roles. That is great exposure but when he asked me what I wanted to do, I honestly had not thought about it, I was just enjoying the journey.

“I knew my CV was very coach heavy but the one thing I did not have enough experience of if I wanted to become a head coach was that I did not have as much experience managing people and staff, dealing with boards and budgets and those types of things.”

The desire for more took him to the other side of the planet.

“I did not have a partner or a mortgage so it was an opportunity to experience a new culture. I had a year with New Zealand football that gave me the managerial experience that I was missing. Then I jumped back in with Wellington Phoenix because I missed coaching.”

At just 31, Buckingham was younger than some of the players. “The captain was Andy Durante, who was 34, and the goalkeeper was 35. It was about working with them rather than them working for me. You cannot know it all but it was about building relationships.”

Wellington Phoenix had wanted him to stay on as an assistant, but after having a taste of the head coach role he sought more and returned to England as Stoke City’s U23 coach.

“I wanted to be a head coach so I needed to be gaining the experiences that I wanted. It was everything that I was looking for with the facilities, the £7m spent on the academy.

“Working with players at that level, almost the Premier League, was an opportunity that I could not turn down. The first-team players would drop down and I took a lot from it.

“As a young coach at Oxford, I think I adapted my behaviour to the environment. You go to a library and you are quiet because that is what a library is like. You go to a wedding and it is different. You behave how you think you should behave.

“I got put into a coach’s high-performance accelerator programme in New Zealand and that really made you look at your character and your behaviour and analyse who you are. Nobody is a robot and only by understanding yourself can you work out your values.

“That helped me build my football philosophy and my principles. At Stoke, I was able to be myself and that helped me shape myself for the New Zealand job where I could piece everything together and show how I would like it all to work on the field.” That work with New Zealand remains the standout achievement of his career. His side became the country’s first to win two games at a FIFA tournament, defeating and eliminating a Norway team that included Erling Haaland up front in the process.

The adventure only came to an end with a penalty shootout defeat to Colombia in the knockout stages but it was the manner of the performances that has stayed with the coach.

“It was my first real opportunity to shape something,” Buckingham explains. “My belief was that the players in New Zealand were good enough. What they needed was a clear collective direction and collaboration, an idea of how we were going to work.

“When the final whistle went after the first game against Honduras and we had won 5-0 it was not just the result but the style of play that we had flipped on its head.

“The results will always be the measure and we became the first New Zealand team to win two back-to-back games at a World Cup and keeping two clean sheets.

“But what was really pleasing was that those internal measurements – the possession, the passing and the style of play that we wanted to bring to life – were there too.

“I hope it has not just changed the mindset of the players in that country but it can also be used as a sustainable blueprint for success because of the results we had after that with the New Zealand U23 team in qualifying for the Olympics.” 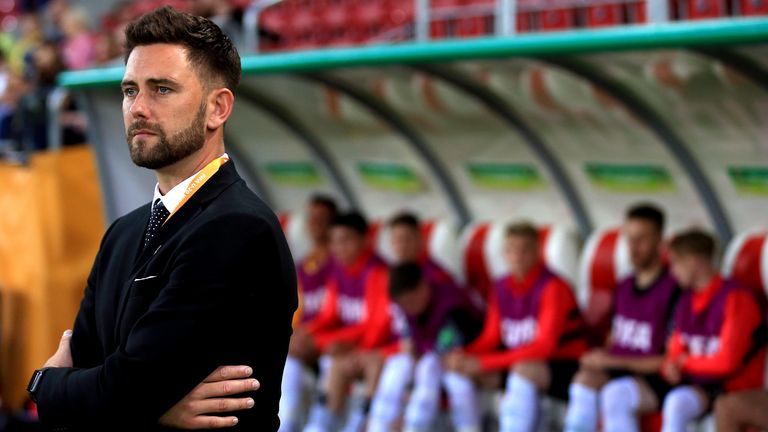 Buckingham sees that Olympic qualification as vindication of a holistic approach that incorporated elements of Maori culture and borrowed from the All Blacks principles.

“We built a style that was unique to New Zealand and that brought the players closer together because we reflected the environment,” he explains. “We created an identity.”

In doing so, the perception of football in New Zealand was changed.

“We have had some wonderful moves,” he adds.

“Sarpreet Singh moved to Bayern Munich for a substantial amount of money from Wellington on the basis of what he was able to showcase playing that style of football with New Zealand at the World Cup. He has now made his Bundesliga debut.

“We only took three professional players to the World Cup, the rest were amateur players. The majority of those are now playing professional football off the back of that. So we got people looking at what was happening in New Zealand football.”

Buckingham was looking forward to leading the team at the Olympics but there was a cruel twist in the tale when the delay to the tournament left him out of contract and with the new senior men’s coach wanting to assume control of the U23 side.

The players came out in support of the coach who had led them on a 12-game unbeaten run but the decision had been made. He does not want to dwell on the obvious disappointment, but is prepared to concede that it was hugely frustrating.

“We had been so positive in our approach so to lose that opportunity, not just to go to an Olympics but to build on that success was disappointing. We were developing something.

“It is the one of the few times when you are successful in your job and still end up losing it, but that is unfortunately the world in which we work. I have been told that if you have not been sacked in your coaching career then you are not a proper coach.” If there is comfort it comes in the knowledge that the accomplishments did not go unnoticed. City Football Group, now at the vanguard of coaching ideas with successful organisations all over the globe, brought him in and he sees it as the next step.

“I was invited up to Manchester after we qualified for the Olympics to go and spend some time with their staff. We had achieved quite a lot with those teams, doing things that had not been done before with a playing style that was quite different to what New Zealand had traditionally played so they were really interested in the work.

“They shared their idea of the structure and the plans for their clubs around the world. They are building a coaching database too in order to bring success in the short term but hopefully also provide a longer-term pathway within the group.

“There were opportunities to go elsewhere as a head coach but this to me made far more sense because of the environment and what I had seen in Manchester and their approach.

“The one thing about working for City Football Group is that you open up this whole raft of knowledge and research. I connect with the other coaches across the group, there is an elite coach developer based in Manchester and ideas are shared.

“To miss an Olympics was disappointing but jumping into this puts me in a well-structured club that will give me access to new things that will help me better myself. In the long term, City Football Group is a great thing to be involved in.”

As for the flying career, lockdown means that Buckingham has not had the chance to pilot a plane since last spring when he was in New Zealand before lockdown. But the learning never stops. “I am enrolling in some Spanish classes here in Melbourne,” he says.

That appetite for a challenge is not yet sated.