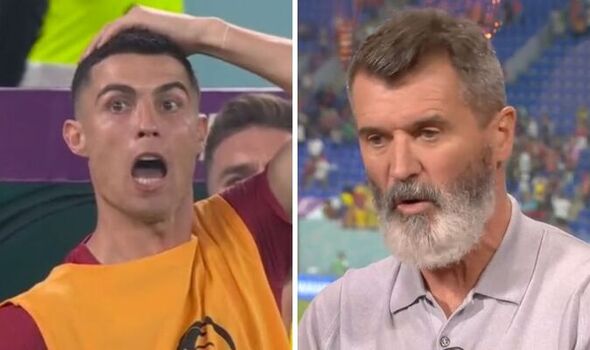 Roy Keane has joked that Cristiano Ronaldo looked as though he “just had a call from Newcastle” judging from his expression during Portugal’s dramatic win over Ghana on Thursday. Ronaldo is playing at the World Cup as a free agent following his bitter split with Manchester United this week.

The 37-year-old hit the headlines for his explosive interview with Piers Morgan, where he went on the attack for United’s fall from grace as well as taking a dig at both the Glazers and Erik ten Hag. His Portugal team-mates have fielded numerous questions about his attitude around the camp during the World Cup with Portugal having to wait until Thursday to play their opening group stage game.

And it proved to be an entertaining clash on both ends as Ghana pushed Portugal all the way. Ronaldo scored Portugal’s opener after he was awarded a contentious penalty before Andre Ayew equalised for Ghana minutes later.

Portugal then scored a quick-fire double from Joao Felix and Rafael Leao, but Osman Bukari scored late on to give Ronaldo’s side a late scare. And the former United forward had his heart in his mouth when Diogo Costa was caught unaware in stoppage time when Inaki Williams snuck up behind him to steal the ball from his feet, only to slip and miss a great chance at a late equaliser.

Ronaldo couldn’t believe what he was seeing while gesticulating on the sidelines as cameras caught him with his hands on his head. Portugal were able to hold on to all three points, but Keane couldn’t help but make fun of his former team-mate, suggesting that his reaction made it look as though he’s just received a call from Newcastle about a possible transfer.

Keane said: “Look at Ronaldo’s face, my goodness. Honestly, he’s just had a call Newcastle are in for him.”

Ronaldo will likely put on hold any decision on where he plans to play next until after the World Cup. But the Portuguese superstar won’t be short of options with the MLS and clubs in Saudi Arabia reportedly prepared to pay him big money to make the switch.

Ronaldo also has interest in Europe too though with Chelsea touted as possible suitors. A return to Sporting Lisbon has been tipped too and Frank Leboeuf believes it would be the best option.

“[Ronaldo] He hasn’t got the power of changing a game like he used to have,” Leboeuf told ESPN FC. “With all due respect, he was a fantastic player, but he isn’t the same. That’s clear, and we can all see that.”

He added: “Maybe [he should] re-join the team he started with, Sporting Lisbon, which would be a great idea.”