Report and highlights from the Sky Bet Championship clash between Coventry and Bristol City at St Andrew’s as goals from Leo Ostigard, Matty Godden and Viktor Gyokeres boosted the Sky Blues’ survival hopes

Coventry took a huge step towards securing their Championship status with an impressive 3-1 victory over mid-table Bristol City.

Norwegian defender Ostigard scored his first goal for the club with an early side-footed volley and Godden doubled the lead from the spot in the second half after Tomas Kalas’ clip on Tyler Walker.

Nahki Wells pounced on Kyle McFadzean’s poor back pass to pull a goal back with 11 minutes left, but Callum O’Hare teed up substitute Gyokeres to settle any Coventry nerves three minutes from time. 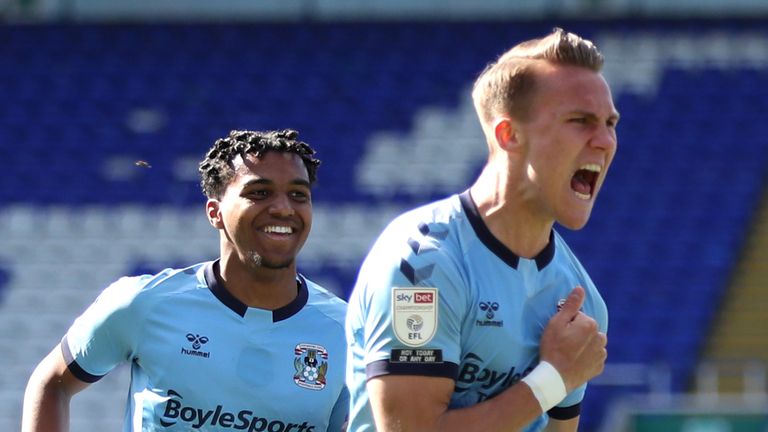 The victory, combined with 22nd-placed Rotherham’s home defeat to Wycombe, gives Coventry, in 20th, crucial breathing space, although the Millers do have three games in hand.

Bristol City, meanwhile, remain 14th after a third straight defeat, although Wells’ strike meant they at least avoided failing to score for a fourth consecutive match.

Coventry went ahead after nine minutes as Sam McCallum’s long throw was flicked on to the far post and Walker’s blocked shot looped up for Ostigard to side-foot home on the volley from 15 yards.

They almost doubled their lead nine minutes later as Godden neatly turned a defender in the box from O’Hare’s pass but his measured curler was tipped onto the post by Daniel Bentley.

O’Hare flashed the rebound across goal and wide from the right-hand side of the area before drilling just off target from 20 yards as the hosts dominated.

Bristol City improved as the half progressed and almost levelled after 35 minutes, Antoine Semenyo’s driving run and near-post cross finding Wells who saw his close-range effort bundled away by Coventry keeper Marko Marosi.

The visitors went close again after the break as Han-Noah Massengo agonisingly failed to connect with substitute Kasey Palmer’s low ball across the face of the six-yard box with the goal at his mercy.

But Coventry doubled their lead after 63 minutes when Kalas needlessly cut across Walker’s run and Godden slammed home his first goal since October 20 in a campaign plagued by foot injuries.

That should have been it but McFadzean played a back pass blind and presented the ball straight to Wells, who coolly slotted his ninth league goal of the season past Marosi after 79 minutes.

Coventry, though, killed off any chance of a comeback with a swift break after 87 minutes as Walker picked out O’Hare in the box and he squared for Gyokeres to tuck underneath Bentley.