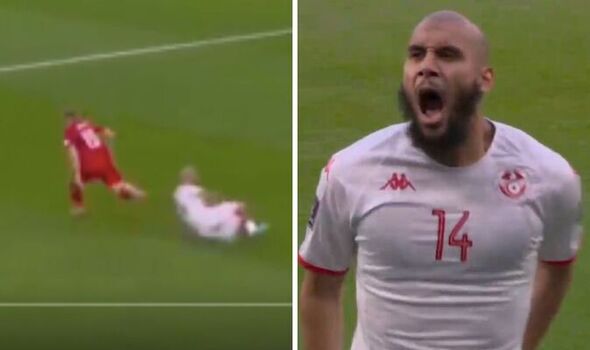 On his miraculous return to international tournament football following his cardiac arrest at Euro 2020, it was clear from the get-go that Christian Eriksen would not be receiving any special treatment from a totally committed Tunisia side – that were simply willing to give everything to win in their Group D opener against Denmark. The feisty goalless encounter was just a few minutes old when Carthage Eagles’ midfielder Aissa Laidouni slammed into the Manchester United playmaker – taking the ball and a bit of the man – before celebrating the thunderous tackle like he’d just scored the winning goal.

As the ball broke to Eriksen in space on the right flank, the relaxed technician took his time on the ball but a heavy touch was quickly greeted with a crashing challenge that fired up the Tunisian crowd, who had travelled in their numbers to the Education City Stadium in Doha to cheer on their beloved nation.

Laidouni then roared in animalistic fashion and rallied Tunisia’s supporters by waving his arms to provoke a positive booming reaction.

The Ferencvaros ace was evidently bang up for this tasty matchup as the adrenaline pumped through his veins and transmitted through to his international team-mates, who were out to agitate Denmark from the first whistle.

Eriksen reacted with a wry smirk as he strolled towards the ball on the side of the pitch. If he wasn’t aware of Tunisia’s commitment to the cause – he was now.

Last season during his impressive six-month stint with Brentford there was a hugely contrasting reaction from Brandon Williams when he challenged Eriksen while playing in a Premier League fixture for Norwich against the Bees.

Williams, who is now Eriksen’s United team-mate, went viral for hugging his opponent as they laid on the turf following a tackle – having initially looked ready to explode.

The harrowing events in Copenhagen at Euro 2020 now see Eriksen perceived as one of football heroes and one of the most appreciated players within the game. But that was no longer the case in Qatar as Tunisia looked to rough up the Denmark orchestrator.

“I don’t think I have seen that in the first minutes of the game,” said pundit Pat Nevin in response to Laidouni’s crashing tackle during radio commentary for the BBC.

As Denmark’s main source of creativity, Tunisia continued to press Eriksen aggressively to nullify his impact on the game. And it worked.

The 30-year-old struggled to replicate the recent eye-catching form he has shown for United having scored and assisted in Erik ten Hag’s side’s gritty 2-1 win on the road at Fulham in their final Premier League fixture before the mid-season break.

Denmark huffed and puffed but struggled to find a way through their African opponents, who fought for every ball just as they did against England in their 2018 opener in Russia.

Laidouni even had the ball in the net for Tunisia in the first half before the goal was chalked off by the linesman’s flag.

Andreas Skov Olsen also had the ball in the net for the Danes in the second half but once again, the strike was ruled out by the linesman.

Express Sport understands that Premier League scouts were in attendance in Doha to specifically watch the Club Brugge forward in action on his World Cup debut.

The 22-year-old attacker has eight goals in Belgium this season in all competitions and also netted five times in World Cup qualifiers for the Euro 2020 semi-finalists.

It was Denmark that would come closest to a winner as Kasper Hjulmand’s side pushed relentlessly for the opening goal.

Tunisia goalkeeper Aymen Dahmen was forced into a superb save from Eriksen’s left-footed drive at goal.

Cardiff flop Andreas Cornelius, who struggled in Wales in the Premier League following a club-record move from Copenhagen, squandered a golden chance following a flick across goal when he somehow bundled the ball against the post.

It’s Tunisia that will be happiest with a point following an entertaining 0-0 stalemate – the first of this tournament.