In Translyvania, the home of Count Dracula, James Forrest sunk his teeth into CFR Cluj and drew blood.

The injuries inflicted on the champions of Romania should be damaging enough now to earn Celtic a meeting with Slavia Prague in the play-off round of the Champions League.

A controlled and composed performance saw the SPFL champions withstand the flesh wound of an opening goal for veteran striker Mario Rondon before the half hour. 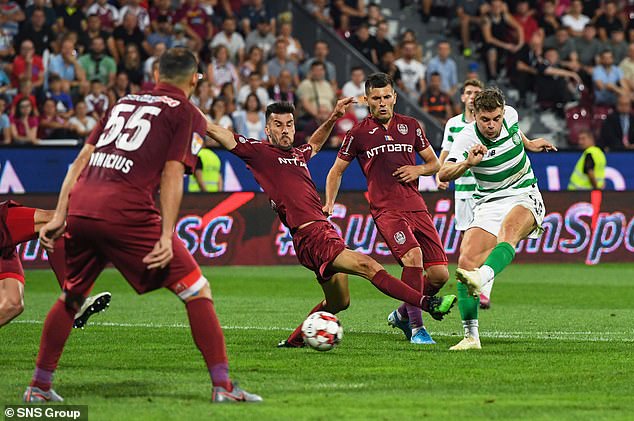 Towards the end of a testing night in the Dr Constantin Radelescu Stadium news broke of the imminent £25million sale of Kieran Tierney to Arsenal. Even a ropey, nervous night for direct replacement Boli Bolingoli couldn’t take the shine from a decent job well done thanks to a solo strike from Scotland international Forrest in the 37th minute.

As he must Neil Lennon played down talk of Celtic being firm favourites to meet Slavia Prague in the final barrier to the Champions League group stages.

Cluj won the home game of the second qualifying round against Maccabi Tel Aviv 1-0 before negotiating a a 2-2 draw in Israel. Yet with a home crowd in Glasgow on Tuesday night Celtic are entitled to fancy their chances. With or without Kieran Tierney, a once in a generation talent for whom the deal was simply too good to turn down. 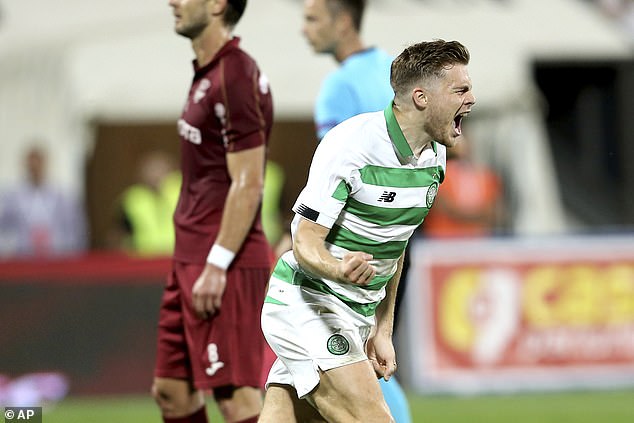 Cluj coach Dan Petrescu spent much of the night gesticulating angrily at officials. His frustration stemmed, no doubt, from the knowledge his team had Celtic on the ropes when they took the lead in 28 minutes.

The goal stemmed needlessly from a dangerous Celtic free-kick in the home team’s territory. From the moment Ryan Christie’s effort struck the first defender Cluj broke in numbers, a superbly weighted Cipran Deac ball in behind the out of position Bolingoli picking out Rondon.

The 33-year-old striker kept himself onside before outpacing the Belgian to calmly slotting an angled low shot under the body of Scott Bain. And Celtic gulped.

It’s too soon for harsh judgements on Bolingoli, a £3million signing from Rapid Vienna. Yet if Kieran Tierney before Thursday’s English deadline at least some of the cash is likely to be diverted to another left-back. 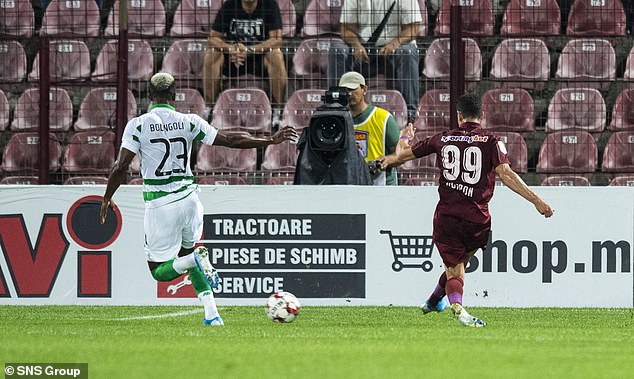 Bolingoli’s early yellow card left him vulnerable to rash, mistimed challenge and a red card and as the home support sniffed blood after Rondon’s clinical finish it was the last thing Neil Lennon needed.

In the minutes after the goal Cluj looked liable to double their lead. Celtic drew the blood from their veins with a precious equaliser eight minutes before half-time.

Israeli Hatem Abd Elhamed had a solid night, sliding a low ball into Forrest 16 yards from goal in a crowded area nine minutes from half time.

There was work to do yet. Somehow the winger found space to work a shooting opportunity with his left foot, the ball sneaking into the net off the inside of the post. From the chaos and mayhem of the preceeding moments the Dr Constantin Radelescu Stadium was suddenly quiet but for the 250 Celtic supporters banked behind a goal. 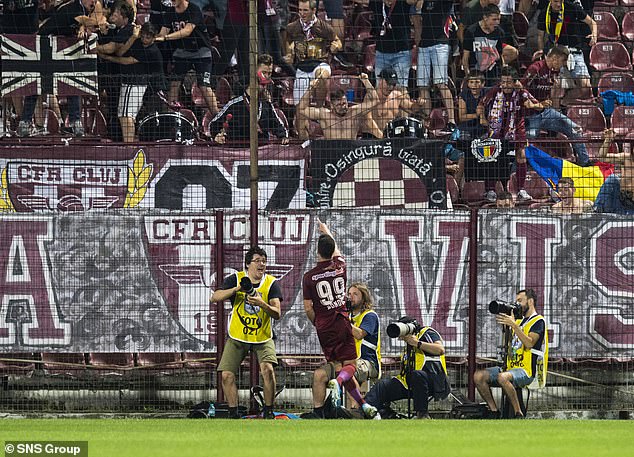 Heading into half-time with the Forrest effort in the bag, Petrescu ranting and raving at substitute goalkeeper Craig Gordon Neil Lennon allowed himself a wry smile. The complexion of the tie had taken a turn for the better.

The job was a long way from done yet, of course. The challenge was to make it through another 45 minutes without defensive mishap.

Bolingoli stayed on the pitch and had a big moment as Celtic survived a hairy moment six minutes into the second half.

How a Cluj corner kick found its way through a ruck of bodies in a cworded area to the unmarked number nine Bilel Omrani at the back post God only knows.. The striker should have burned the opportunity, a hesitant effort allowing Scott Bain the time throw himself low to his right and pull off a superb one handed save. This time Bolingoli kept his nerve on the line, hooking the ball clear. 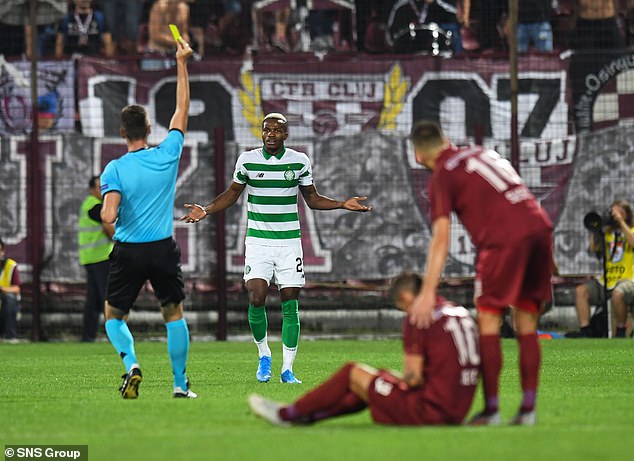 None of this was doing much for Dan Petrescu’s blood pressure. After the histrionics at half-time the former Chelsea defender was one of the first coaches be shown a yellow card under new IFAB directives in the 58th minute.

The home crowd were still animated, but now it was for different reasons. They howled in frustration at the referee, their frustration building. It suited Celtic perfectly.

To shore things up Celtic’s manager threw Olivier Ntcham on for Lewis Morgan. Entering the final 20 minutes the Scottish champions were in a decent place. The game management was sound, the defending solid. 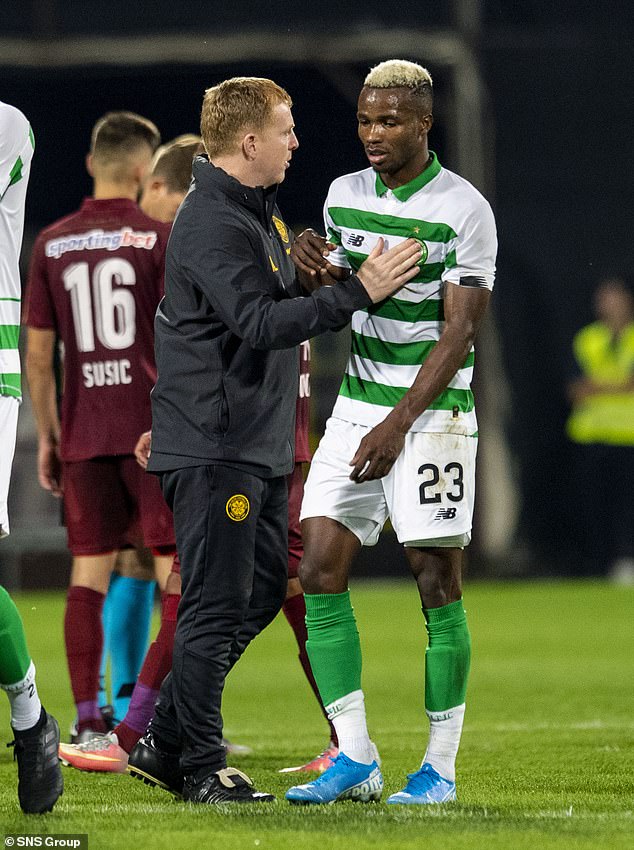 Jozo Simunovic left the fray with 17 minutes to play, presumed injury. The arrival of £7million Christopher Jullien could hardly be said to weaken Lennon’s hand, yet the Croatian and Kristoffer Ajer had fine games.

In truth Celtic had decent performers in a few areas. Scott Brown asserted himself alongside Callum McGregor in midfield, while Forrest had a terrific night which almost improved further when he ghosted in from the left with 12 minutes to play and smacked a low 20 yard shot inches wide of the left hand post with Arlaaukis scrambling.

There was the inevitable late scare for Celtic when a ferocious low 20 strike from substitute Constantin Paun was scooped high into the night sky by Scott Bain. When it dropped the second attempt was hooked over the crossbar, the danger gone.