Celtic are facing a defensive crisis ahead of Sunday’s Betfred Cup semi-final after Jozo Simunovic was carried off during Thursday’s night’s 2-0 Europa League defeat to Leipzig.

Dedryck Boyata is already suspended and Brendan Rodgers may now be forced to field a makeshift pairing at the centre of his rearguard against Hearts, with Jack Hendry and Filip Benkovic his only fit options.

And the Celtic manager admitted: ‘Jozo looks like he’ll be struggling. He took an awkward landing when he jumped for the ball. He will be a question mark for the weekend. 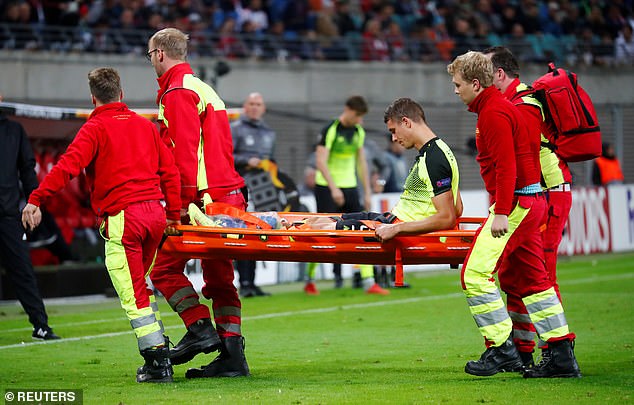 ‘Unfortunately Dedryck Boyata, who I thought was outstanding for us tonight, won’t be available at the weekend for us. I think Jozo will struggle.’ Rodgers does not have his problems to seek ahead of Sunday’s encounter, with a number of key players unavailable.

Captain Scott Brown will certainly miss out and his absence was felt once again last night as Celtic struggled against their Bundesliga opponents.

Despite a positive start they went behind to two first-half goals from Mathaeus Cunha and Bruma and had it not been for some Craig Gordon heroics, the damage could have been even worse.

Now the visit of Leipzig to Glasgow is key with Rodgers admitting victory is a must if Celtic are to have any hope of progressing through the group stage.

‘I’ve seen enough to know we can win the game at home,’ the Celtic boss insisted. ‘We’ll have players that will come back and it’s something well within our capabilities. 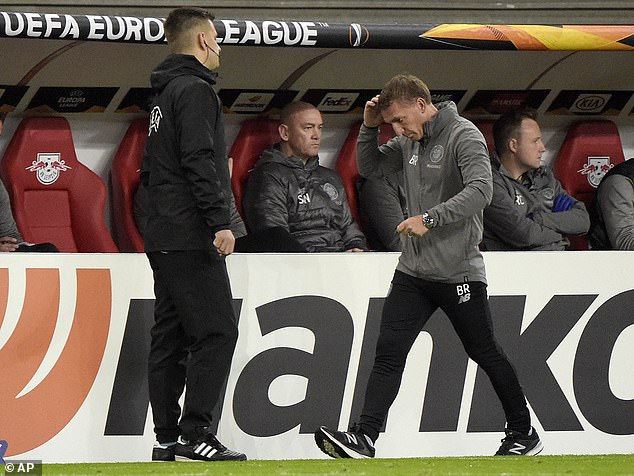 ‘Having 60,000 at home will certainly give us a great opportunity.

‘If we’re going to have any aspirations of getting out the group then it’s a game we almost have to win. That will be our objective come the next game.

‘I felt there was a lot of positives from the game. I thought we started the game very well. After 25 minutes, their manager changed Leipzig’s system to match our diamond.

‘I felt we were finding the spaces well and were getting into good positions moving forward.

‘We had a big chance through Odsonne Edouard after seven minutes and then had a period of 15 minutes where we did well.

‘Their goal knocked us a little bit and then they got the second goal but we regrouped again and changed our shape. We found a better comfort in defending the spaces. 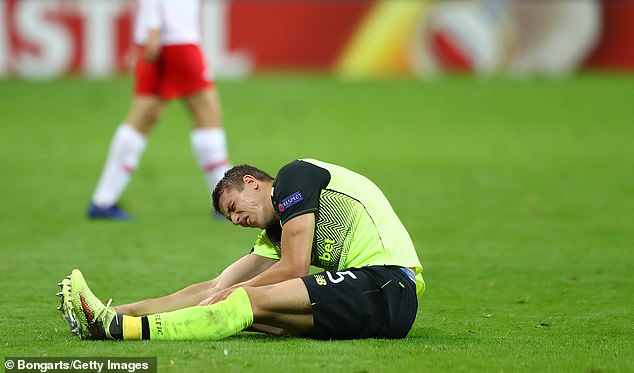 ‘The key moments you have to defend better and unfortunately we didn’t.

‘We’ve obviously lost two matches now against two very good sides away from home. We’ve got three points on the board but we always knew our home games would be vital for us and try to pick something up away.

‘We have to look to the next game at home and look to win that – if we don’t it becomes really difficult. It gives us a great chance but we know we have some work to do.’