Cardiff 0-1 Leicester: Demarai Gray scores only goal as Claude Puel’s men rally together to put traumatic week behind them to claim all three points

The fragility of life has been the focus of thoughts for Leicester City this week. Training has come secondary to talking.

That sense of somberness will take a long time to shift but back on the pitch, back where normality could briefly blossom, the ferocity of football took its grip.

For 90 minutes, that luminous yellow ball felt like the most important thing in the world. 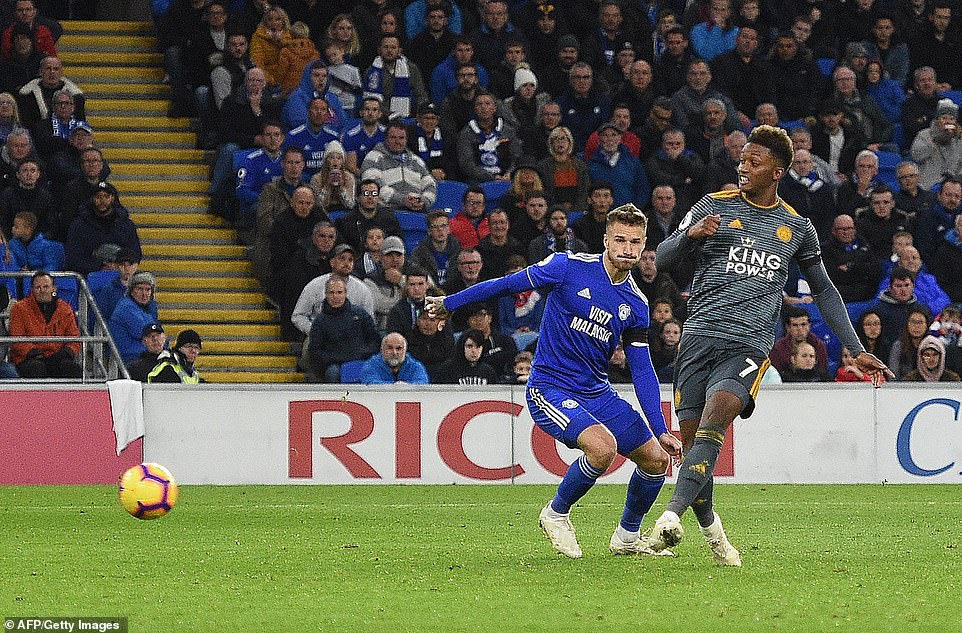 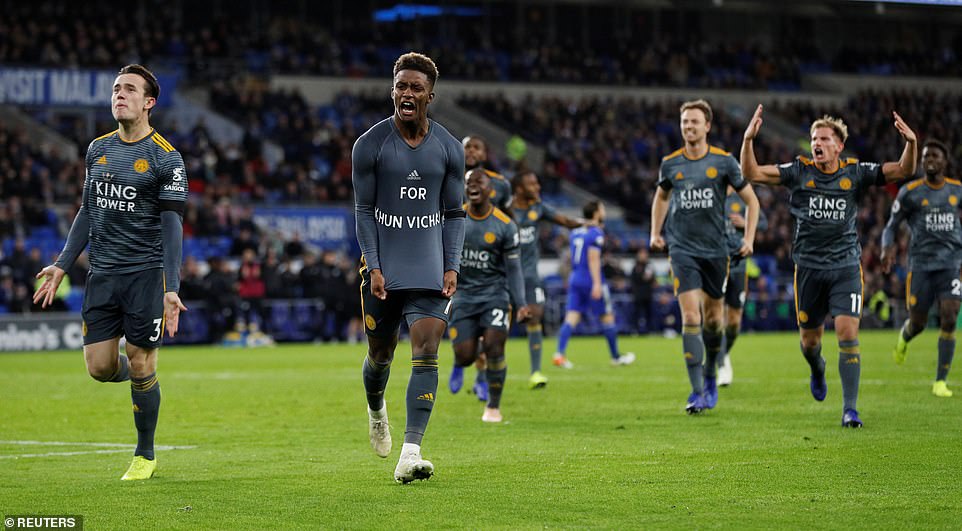 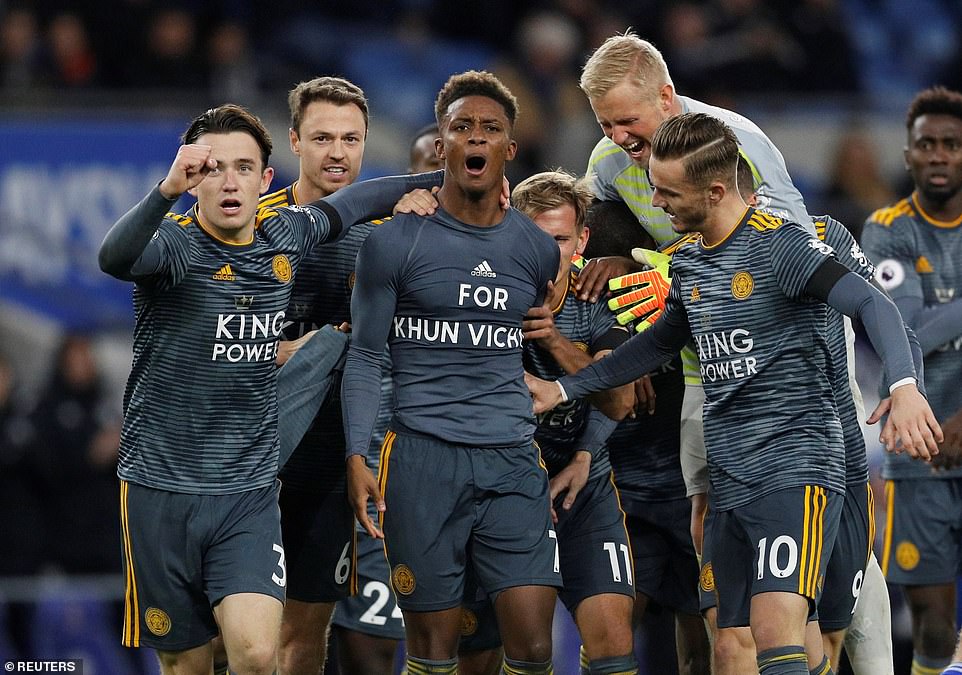 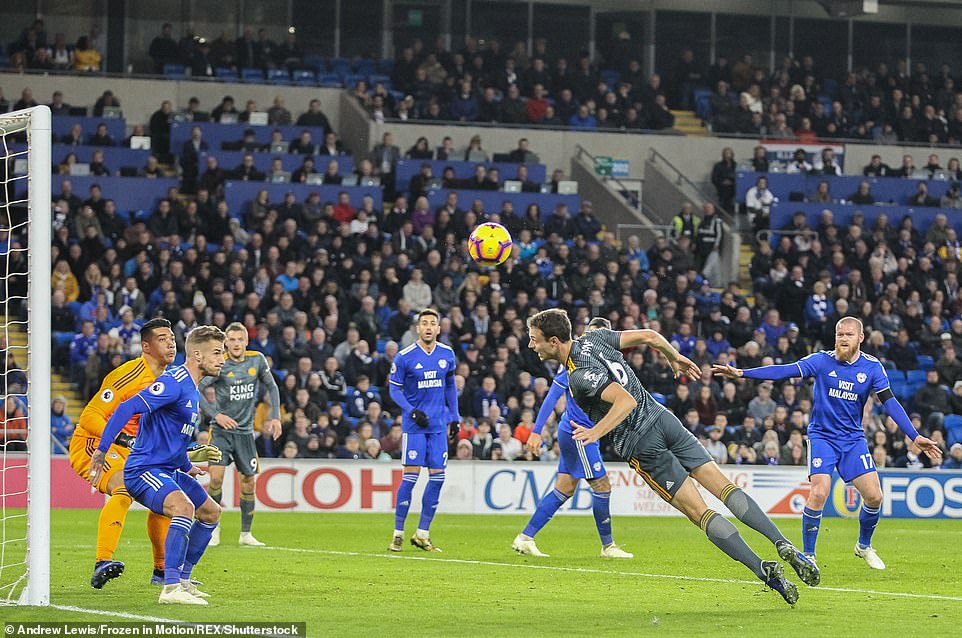 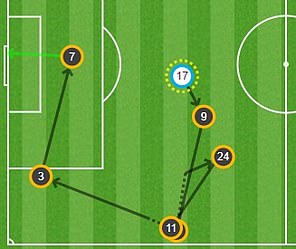 Demarai Gray produced a smart finish from inside the box to seal all three points for Leicester. CLICK HERE to see more from Sportsmail’s brilliant MATCH ZONE feature.

It was there in the way Leicester appealed desperately for a first-half penalty that Lee Probert erroneously failed to award.

It was there in the way the whole team, Kasper Schmeichel included, ran to celebrate Demarai Gray’s excellent goal in the 55th minute.

Claude Puel said in advance the result would be inconsequential. He was showing his humanity. But Leicester’s players wanted a result here. They wanted to win this one.

Credit to them that they shook the cloud of grief from their minds and delivered a performance that was in parts defiant, composed, and creative.

Gray’s goal came from the latter category. Marc Albrighton freed Ben Chiwell down the left and Gray met the cross on the half-volley to sweep past Neil Etheridge. It was the perfect way to honour Vichai Srivaddhanaprabha. Moments later, in the 60th minute to coincide with the Leicester chairman’s age, away supporters sung ‘When You’re Smiling,’ the club anthem. It had certainly been a goal to please the soul. 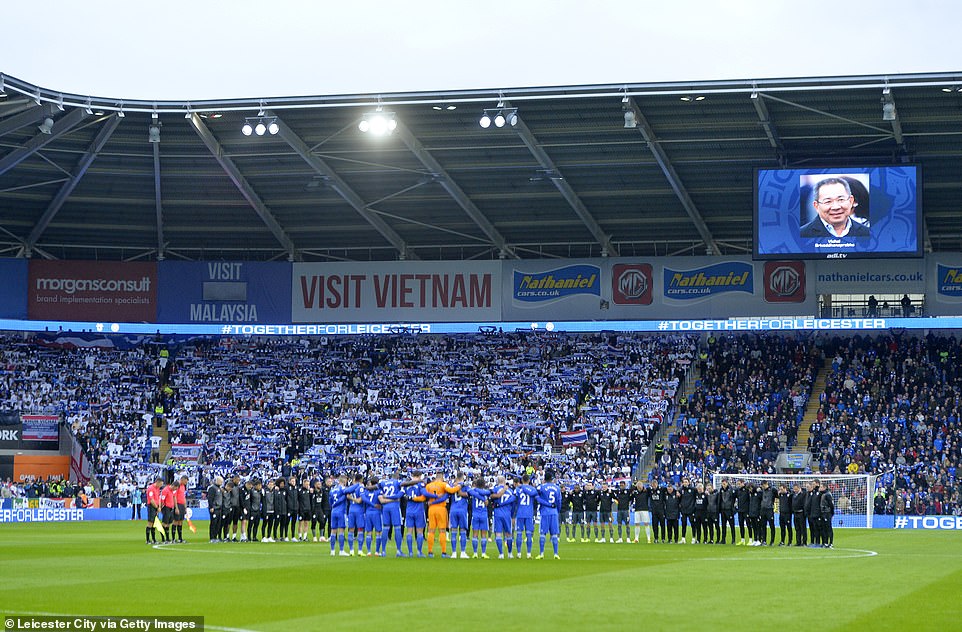 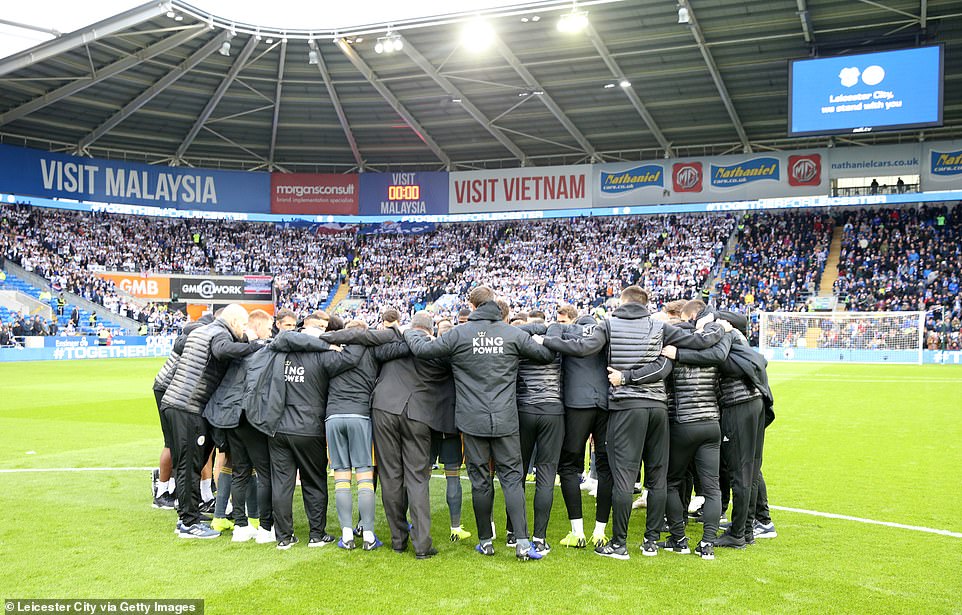 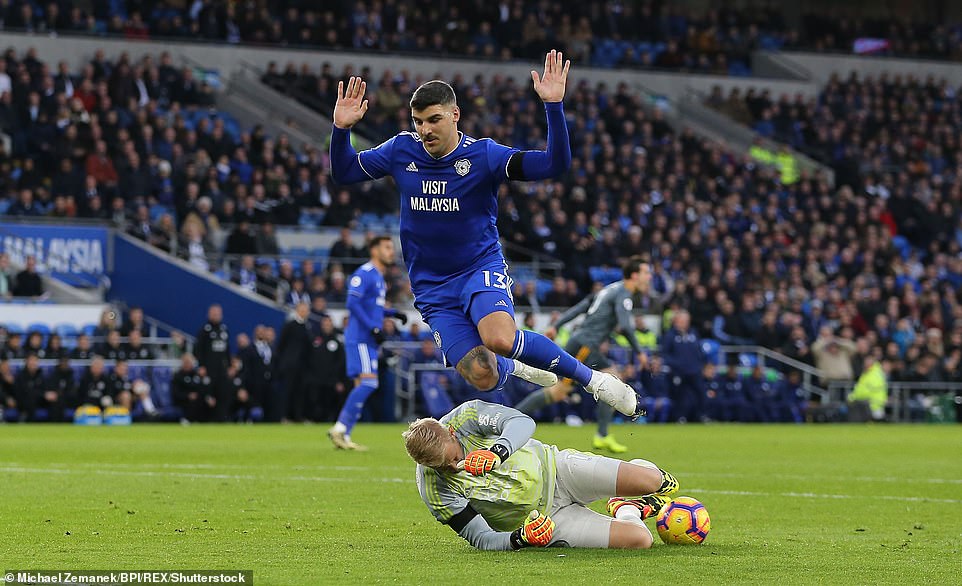 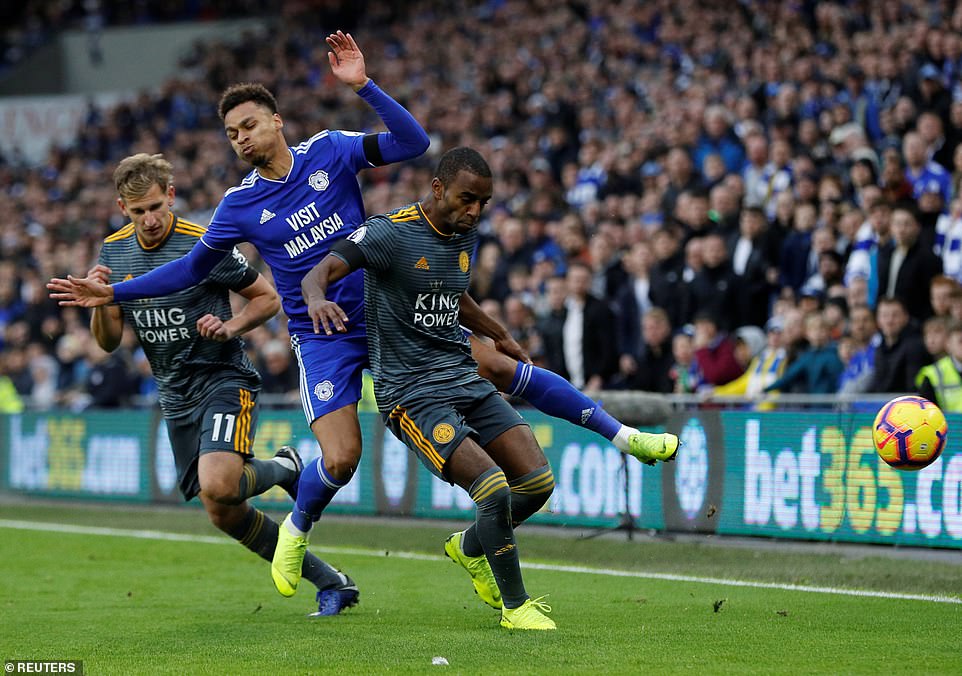 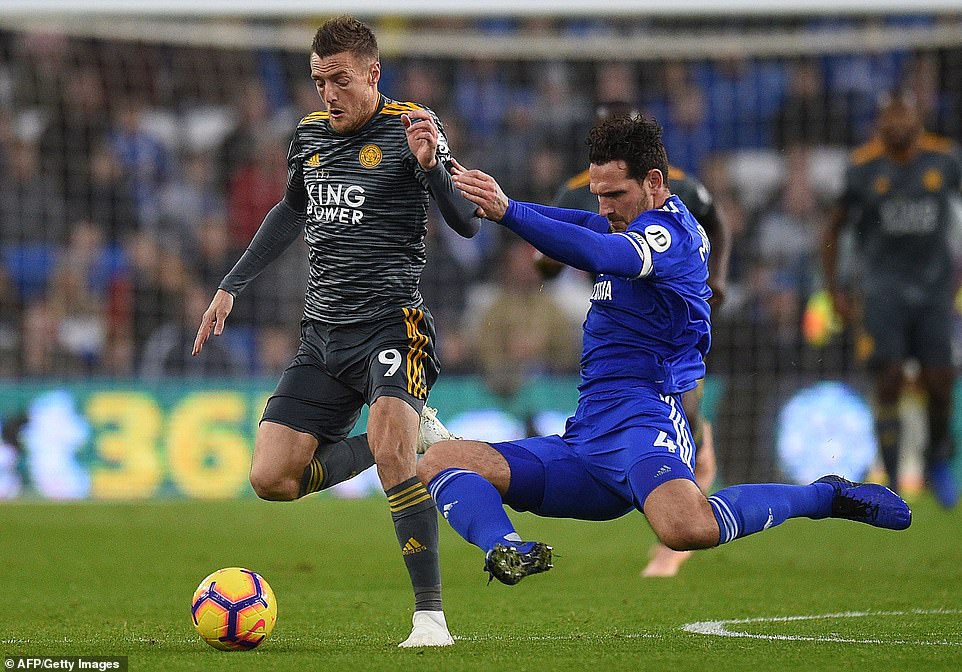 Cardiff were game participants. They were no patsies. Clearly Neil Warnock would not allow sympathy for opponents to affect the necessities of his own team. They pressured, but Leicester stood firm.

At the final whistle the players looked to the skies, roared with joy, and gathered for a collective gasp of emotion.

Form inevitably factored, but it does not seem coincidental that Puel picked a team full of individuals whose bond with Srivaddhanaprabha went back a long way.

Returning to the team were Wes Morgan, Jamie Vardy, and Gray, who were all part of the title triumph that created a deep well of special experiences from which closeness could grow.

Then there was Schmeichel starting in goal, seven days after distressing at the sight of the flames rising high from his chairman’s helicopter wreckage. The inclusion of Albrighton, who quietly visited the memorial outside the King Power Stadium on Wednesday, and Chilwell, a graduate from Leicester’s academy, added to the sense that this was a group carrying acute grief. 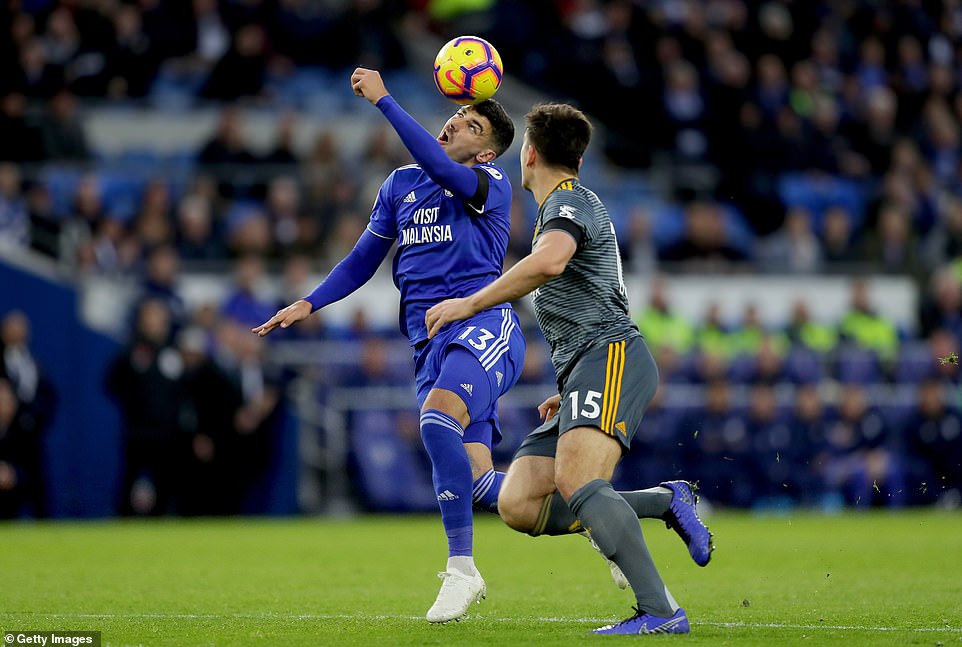 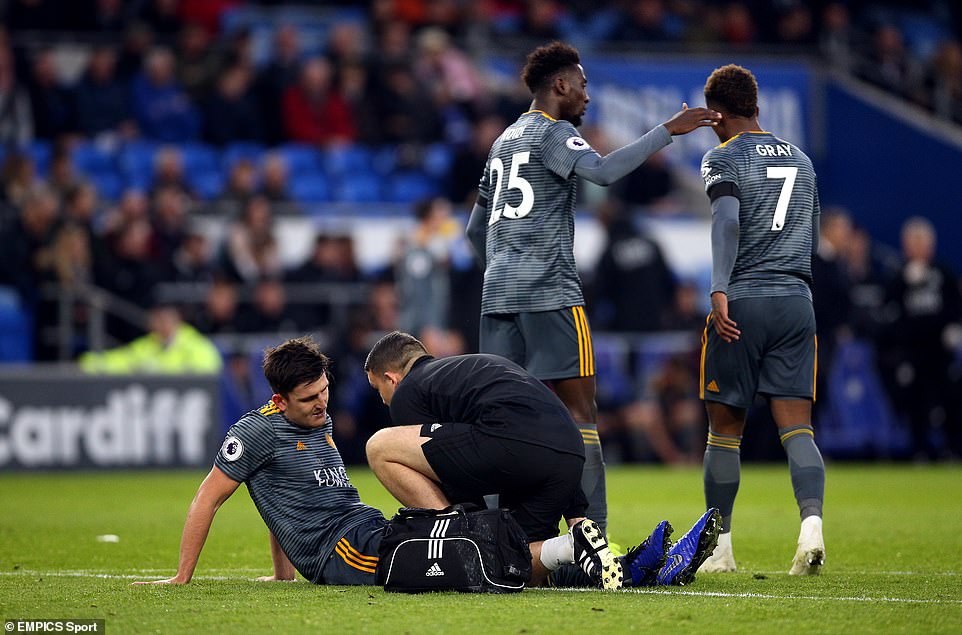 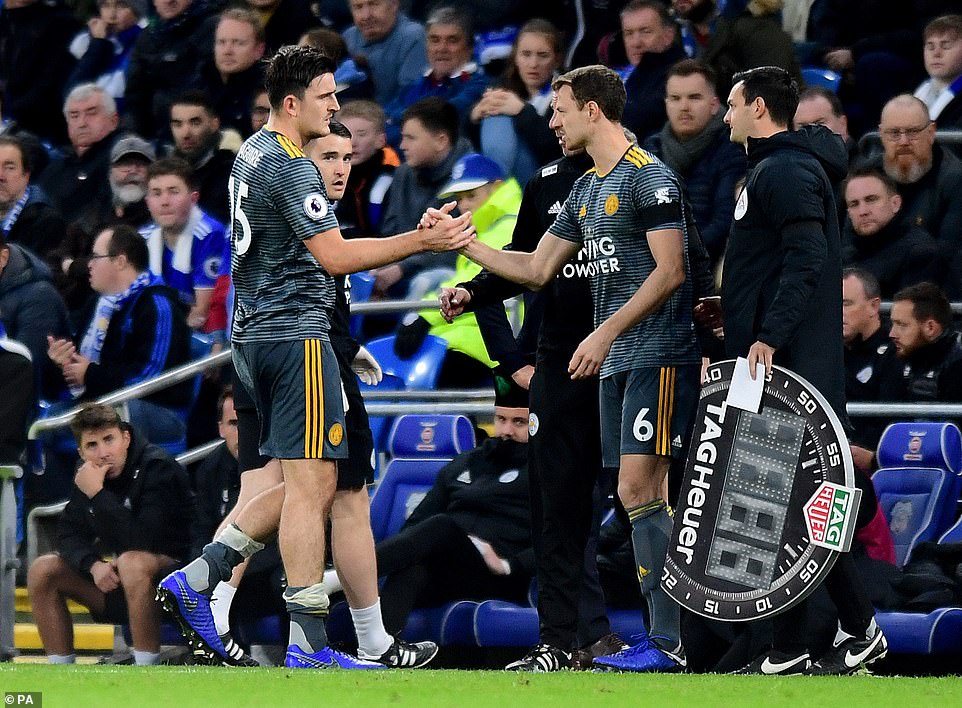 Morgan articulated the feelings of his side before the game. ‘The lads have been devastated,’ he said. ‘But we know the wishes of the chairman. He would want us to get out there on the pitch and try our best.

‘We’ve had to hold in our feelings and gather ourselves for this game. In a weird sense, when we are out on the pitch it is a bit of a distraction. As long as we can keep our emotions in check I’m sure we can do the chairman proud.

‘He was a wonderful man, had a big, big heart, was a caring, thoughtful person who would do anything for anybody. He will be someone who is sorely missed, not just at Leicester City but on this earth.’

Leicester’s players had been applauded into the stadium by Cardiff fans and then again when they went to the corner to finish their warm-up. It made for a unique pre-match atmosphere.

The minute’s silence was observed without a single sound, and with the entirety of Leicester’s squad and coaching staff on the pitch around the semi-circle. Morgan then led the largest and most impassioned huddle a football field has surely ever seen.

‘Champions of England, you made us sing that,’ was the chant from the away end, where almost everybody was wearing the free t-shirt given out at the turnstiles in tribute to the man they call The Boss. 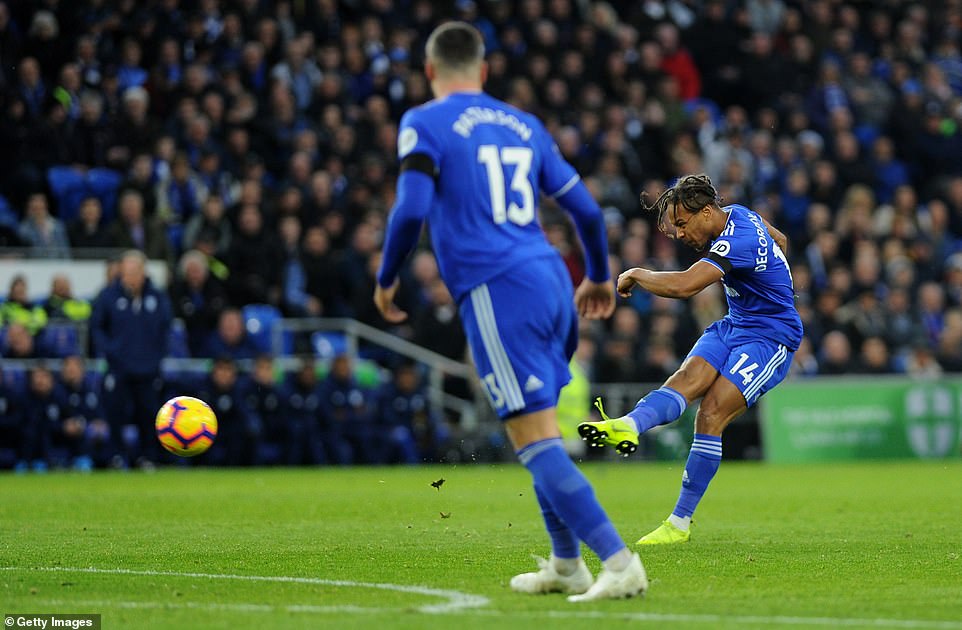 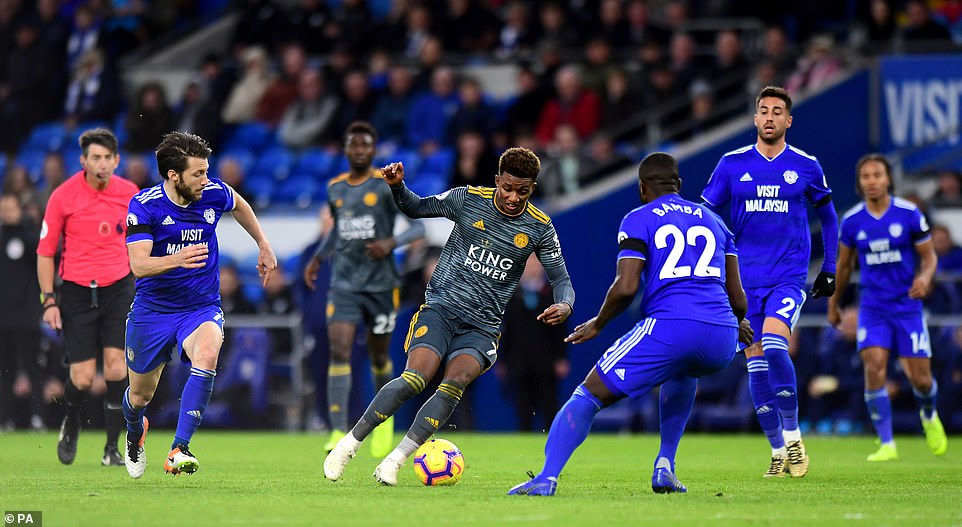 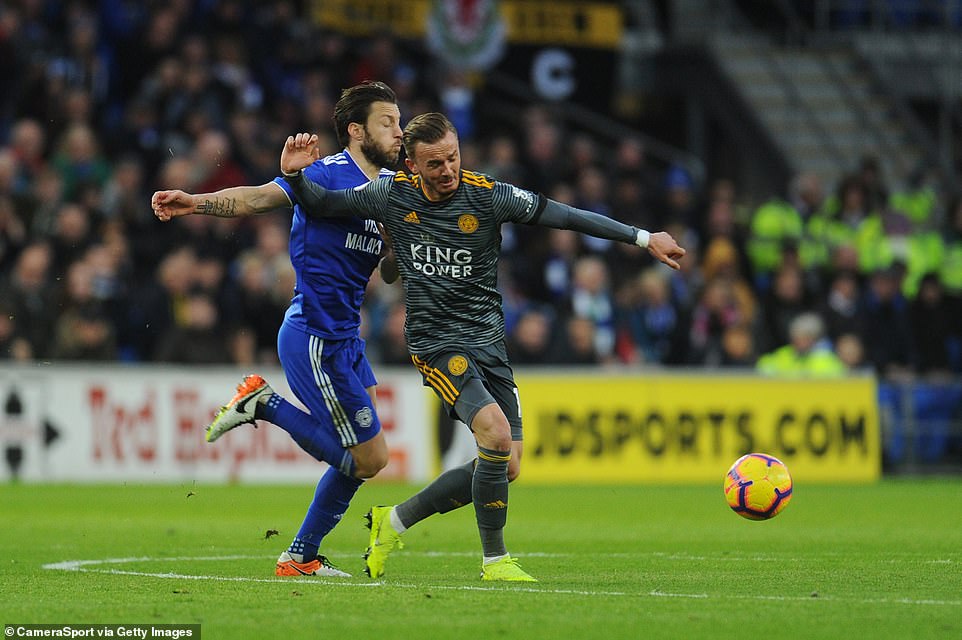 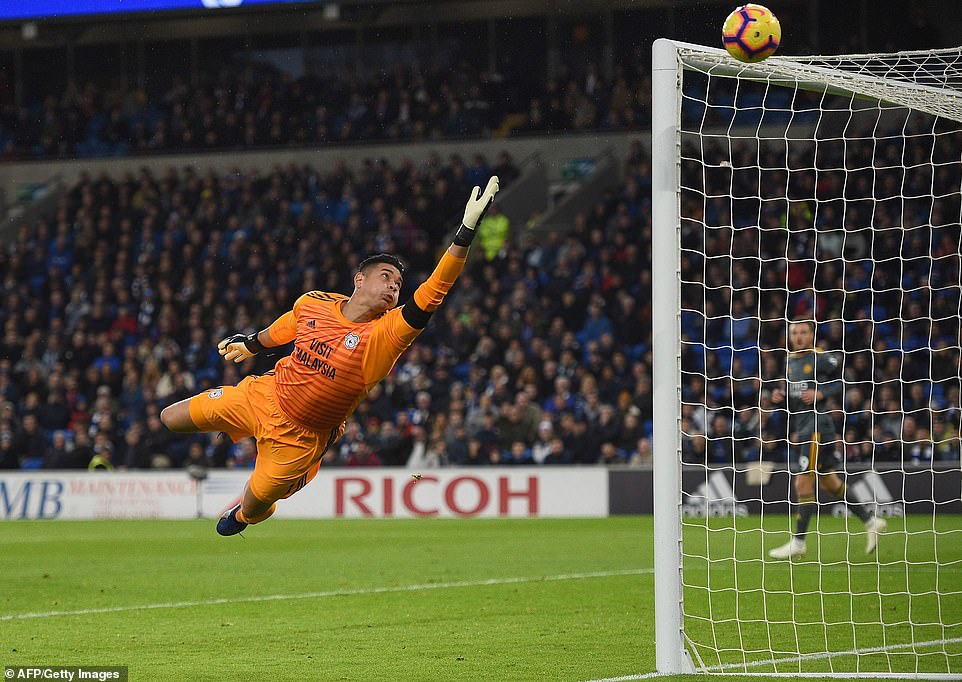 Then a competitive football match broke out. Referee Probert reprimanded Harry Maguire for contesting a decision too vociferously, and the Cardiff fans called angrily for a red card when the Leicester defender tugged back Callum Paterson when chasing a high ball.

Probert shook his finger but in the incident Maguire fell awkwardly, his right knee jarring in the turf, and despite trying to carry on he was eventually replaced by Jonny Evans, anguish etched on his face.

As far as the action Victor Camarasa struck the bar with a thunderous free-kick, then Wilfred Ndidi got his header from James Maddison’s corner all wrong. A shot by Nampalys Mendy deflected into the side-netting. 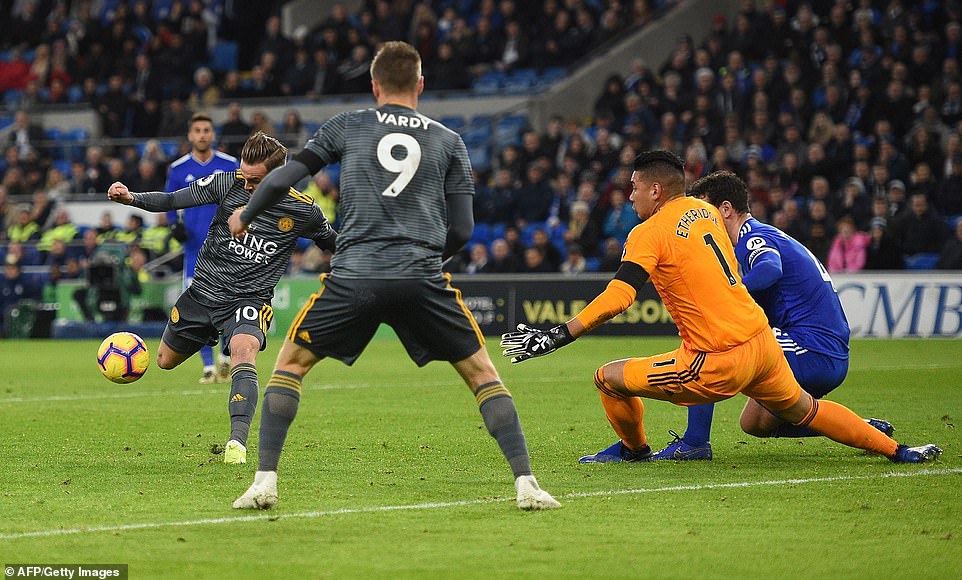 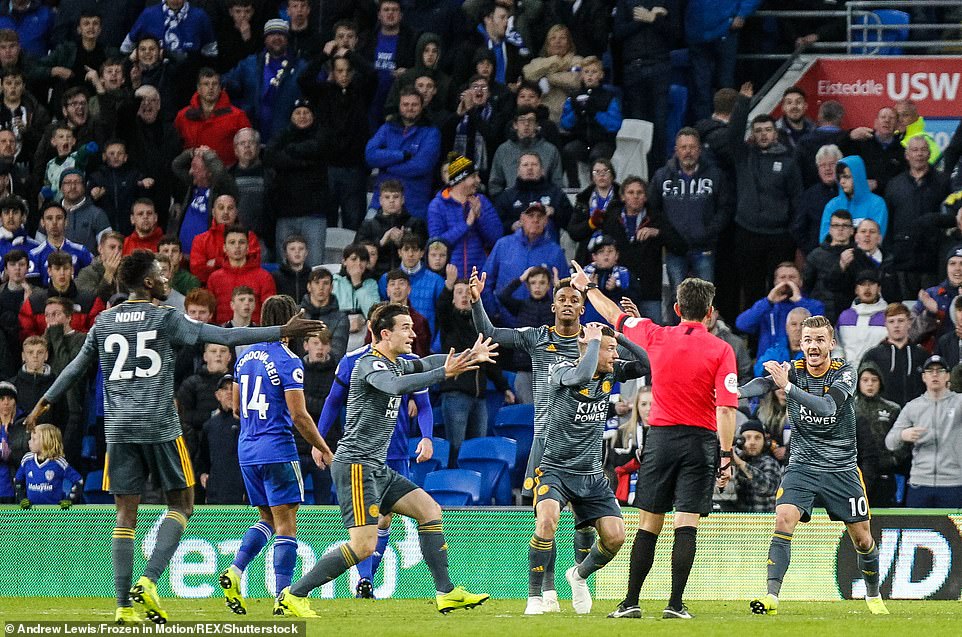 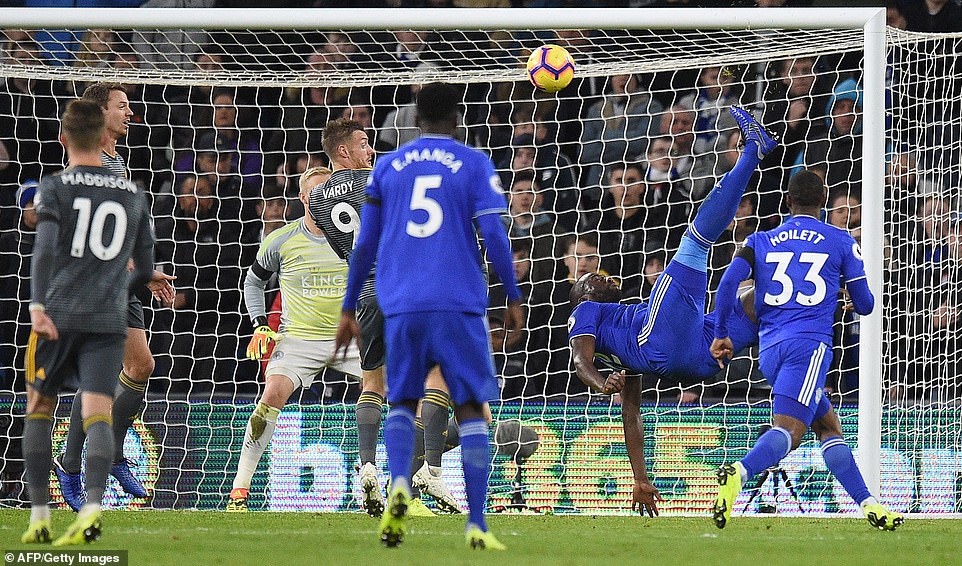 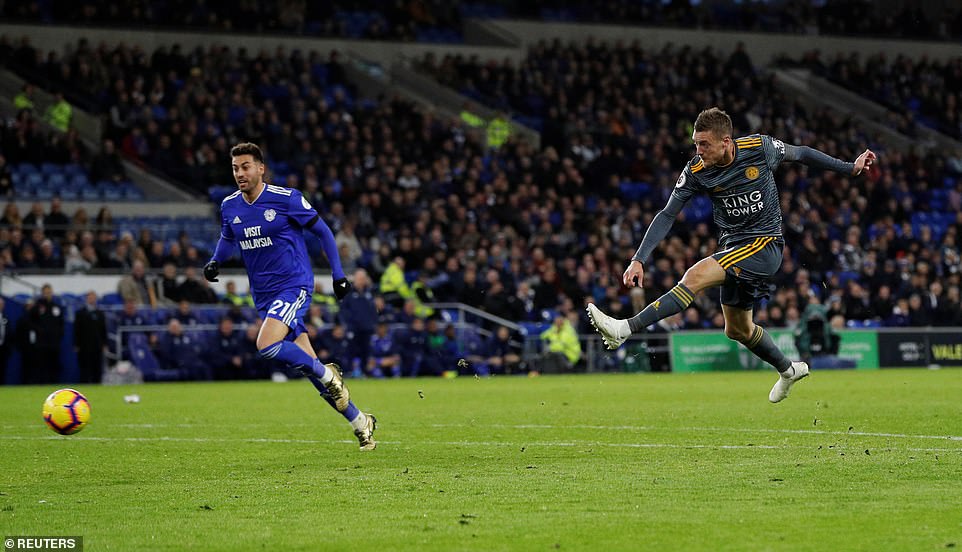 Then on the stroke of half-time Probert made a fundamental error. Etheridge only parried Ricardo Pereira’s shot and the loose ball fell to Vardy, who struck a finish that was deflected onto the bar and over by Sol Bamba’s outstretched arm.

Nearly all of Leicester’s outfield players appealed instantly but Probert signaled for a corner. It was a bad mistake.

Cardiff had the first chance of the second half when Josh Murhy ran through but saw his effort saved by Schmeichel.

Soon after Leicester scored and Gray removed his shirt to reveal the message: For Khun Vichai. Immediately Probert bowed his head. He had clearly expected such a scene and showed Gray the yellow card once celebrations were over. Did he have to? The majority would surely have accepted the bending of a disputed rule on this occasion.

Vardy could have added gloss to the score when put clear by Ndidi but Etheridge spread his body well. It did not matter. Leicester had the victory for Vichai.