Iran are the minnows of England’s World Cup group – but are ranked 22nd in the world and boast Sardar Azmoun and Mehdi Taremi in their ranks… so can Carlos Queiroz’ side cause an unlikely upset amid political turmoil back home?

Keep politics out of sports, and vice versa, most would say.

However, for the Iranian men’s soccer team, it’s impossible not to mesh both together amid chaos on the streets of Tehran just weeks prior to the start of the Qatar 2022 World Cup, where the 22nd-ranked team in FIFA’s World Rankings will face England, Wales and the USA in Group B.

Over the last month, extreme suppression established by Iran’s moral police, known as the ‘Islamic Religious Police,’ led to the death of 22-year-old woman Mahsa Amini, while she was held in custody.

She had been arrested for allegedly covering her head with a compulsory headscarf too loosely. Iran is is currently one of the three governments using the title Islamic republic in its official naming.

In response, several star players, including Bayer Leverkusen’s Sardar Azmoun, and Mehdi Taremi, of FC Porto, made their silence known on Instagram by blacking out their profile pictures prior to the team’s final friendly against Senegal in September in Austria. 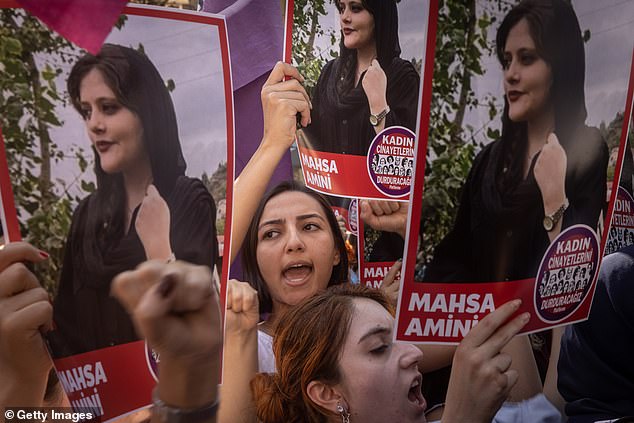 Women hold signs during a protest over the death of Iranian Mahsa Amini outside the Iranian Consulate in Istanbul, Turkey. Amini died in September after being arrested in Tehran by the Islamic Republic’s ‘morality police’, for allegedly violating the countries hijab rules, and her death sparked weeks of violent protests across Iran and football ahead of the 2022 World Cup 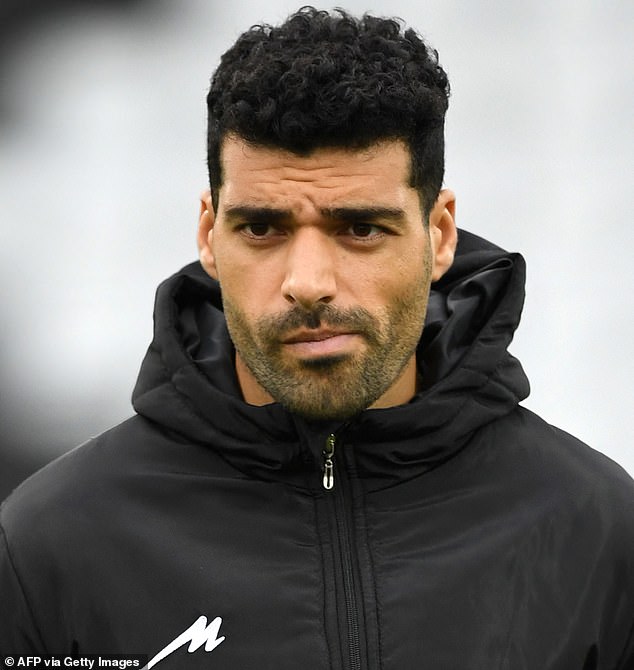 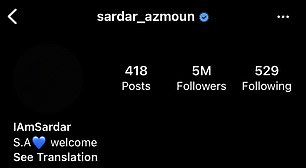 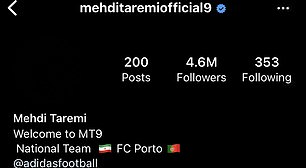 Several star players, including Bayer Leverkusen’s Sardar Azmoun, and Mehdi Taremi, of FC Porto, made their silence known on Instagram by blacking out their profile pictures 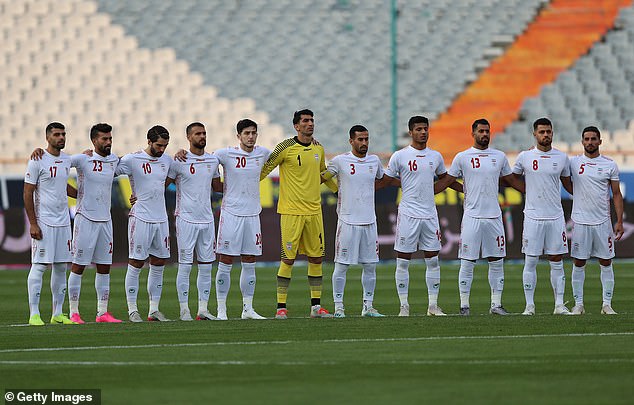 The Football Federation Islamic Republic (FFIR) of Iran had also attempted to quieten down political turmoil back home by banning fans from watching the team, as ‘Team Melli’ drew 1-1 in an empty stadium in Vienna.

Rumors had also linked the FFIR with attempting to arrange a warmup game against Russia in November. Both countries are already closely tied diplomatically due to the Ukraine war, which has made Iran and Russia allies in economic isolation.

And in late September, FIFA was urged to ban Iran from the World Cup over its sporadic recognition of women’s rights. It wasn’t long ago that Iranian women were finally allowed to watch their national team play for the first time since 1979 after pressure from international governing bodies football around the world.

‘The Islamic Republic’s authorities and its football federation must not be given the honor of participating in football’s finest tournament while it is killing its citizens on our streets,’ the Open Stadiums group – a movement of Iranian Women seeking to end discrimination and let women attend stadiums – said in a statement.

The non-profit called on FIFA to stand by its mission to promote and give light to those in need of ‘all internationally recognized human rights.’

FIFA has not yet responded to Open Stadium’s request but the world’s leading football governing body expelled Russia from the upcoming World Cup for similar reasons due to ‘irreparable and chaotic’ harm that could threaten the tournament in Qatar, as diplomatic tensions between NATO countries and Russia continue. 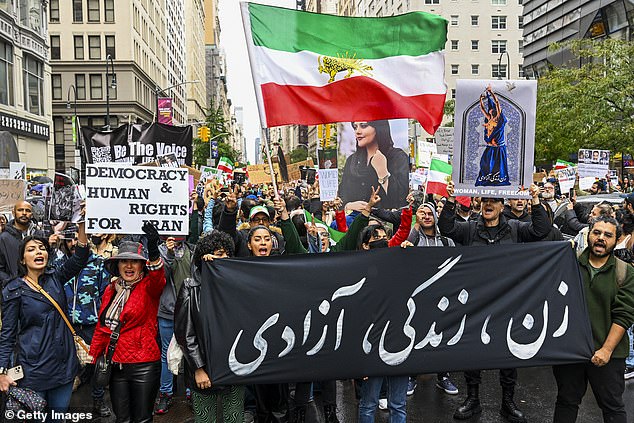 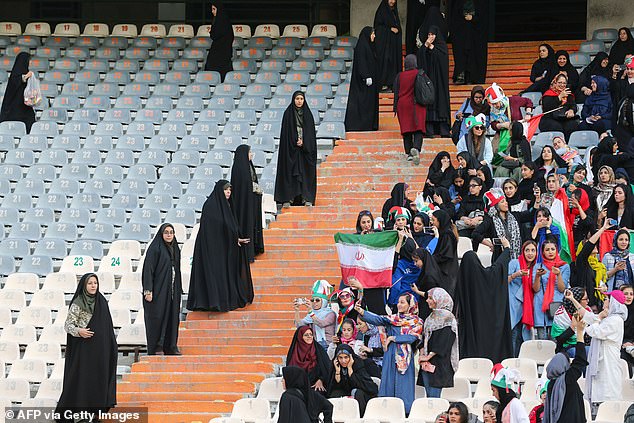 Pictured: Female fans attending the football match against Cambodia in 2019 freely for the first time in decades, after FIFA threatened to suspend the country over its controversial policy 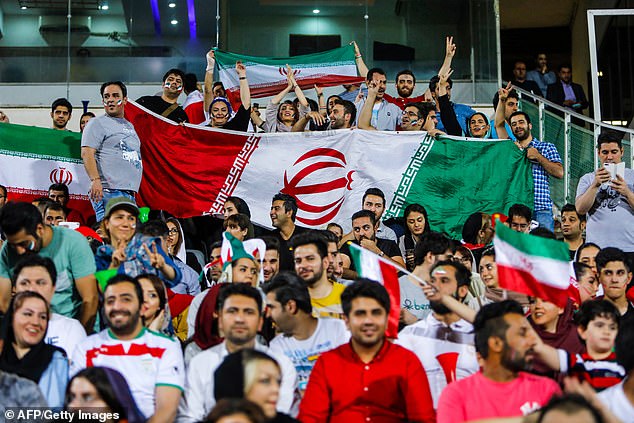 Iran, though, should not fret for its place in Doha, which is located right across the Persian Gulf water, as the World Cup starts on November 20.

The FFIR should rather worry about its players’ stance in Qatar as the world’s most watched sporting competition will provide them a platform to potentially speak about the political disorder in the country.

Star striker Azmoun, who has 41 goals in 65 games for his country, has already defied the federation’s orders by sharing a now-deleted post to his 4.9million followers on Instagram in which he says ‘that I am no longer able to tolerate silence.’

He added that being excluded from the squad travelling to Doha would be ‘a small price to pay for even a single strand of Iranian women’s hair.’

The 27-year-old’s national teammates seemed to agree with his reaction, as they all wore a black jacket that covered up their national team badge while the Iranian national anthem was playing in their last match against Senegal.

Protests in Iran seem to be growing by the week as many activists don’t want to only push for more rights for women but also a government overthrow that has seen the country under clerical establishment the 1979 Islamic revolution.

Cries for help could be heard in Qatar, when Iran will take on England in what will only be the second game of the World Cup on November 21.

The Three Lions and the Star and Stripes will have to be wary against ‘Team Melli’ with the AFC side labelled as ‘minnows’ going into the tournament but in reality are only three sports below Wales, who are currently ranked 19th in the world by FIFA.

After months of speculation, Carlos Queiroz came back to the fold to coach a side that he has found much success with after guiding them to their third consecutive World Cup – an first-time achievement for the country after Brazil 2014 and Russia 2018. 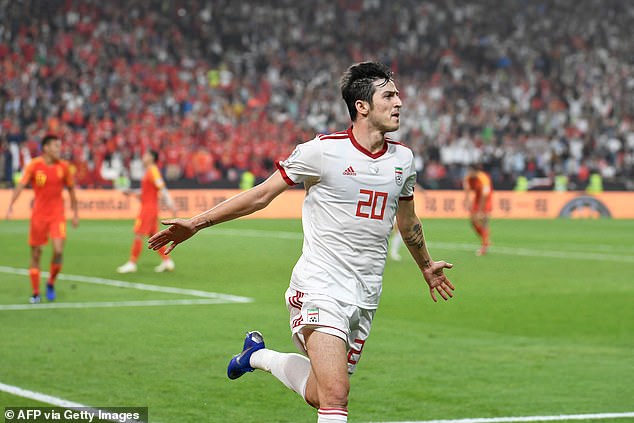 Sardar Azmoun will lead Iran’s attack as he aims to surpass Iraqn legend Ali Daei’s 109 goals. Azmoun, 27, has 41 goals in 65 games and sits third in the all-time goal scoring charts for Iran 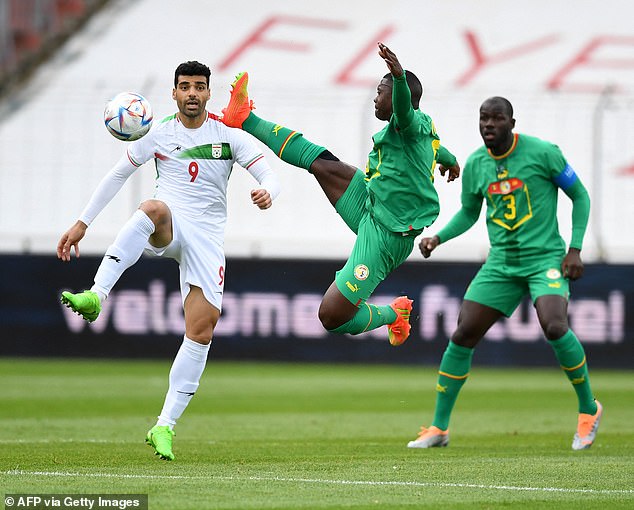 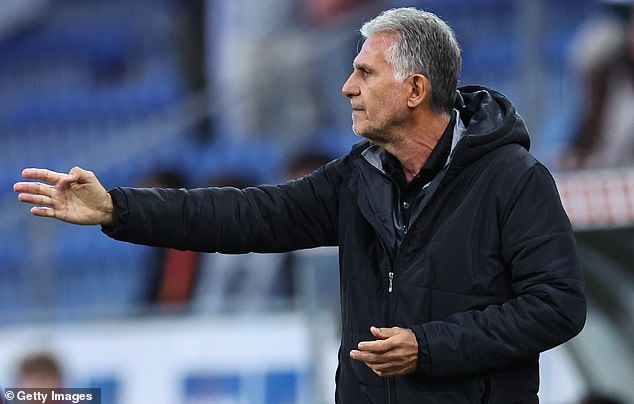 Portuguese coach, Carlos Queiroz, returned to Iran for a second spell to coach the national team, having led the country to three consecutive World Cups in 2014, 2018 and now 2022 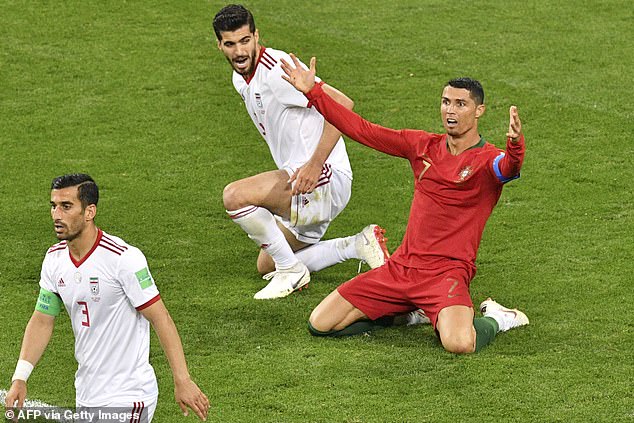 Iran narrowly crashed out of the group stages in Russia in 2018 after the team drew against Portugal, won against Morocco but lost to Spain as the Persian Stars were unable to qualify for the 2018 knockout stages

Under the former Manchester United No 2, Iran had their best World Cup display in Russia, beating Morocco and tying with Portugal before losing against Spain to collect four points and narrowly crashed out as the team was unable to qualify for the 2018 knockout stages.

However, the former Portugal and Real Madrid coach replaced Dragan Skocic in September, giving himself a little more than two months to decide on his 26-man squad traveling to Doha ahead of the November 13th deadline.

‘This is our first step towards preparing for the World Cup,’ the 69-year-old said in Austria during the team’s preparation matches against Uruguay (1-0 win) and Senegal.

‘We will do our best both on and off the field to get ready for the competition. It’s our responsibility to improve the conditions and make progress and always move forward,’ Queiroz further told Iranian state-controlled press outlets.

Carlos Queiroz has a respected record with the Iranian national team, managing 100 matches, with 60 wins, 27 draws and 13 defeats.

Other than seven new faces in the latest squad in Austria, 16 out of 23 players went to Russia nearly four-years ago, including 35-year-old Omid Ebrahimi.

The defensive midfielder, who has played his club football for Qatari-side Al Wakrah since 2021, was a force in Queiroz’s 2018 lineup but has barely featured for his country in the last three years, as his last appearance for Iran was in November 2019.

Another pillar in the Iranian side other than Azmoun and Taremi is goalkeeper Alireza Beiranvand, who currently plies his trade for Persepolis in Iran after stints in Europe for Boavista in Portugal and Royal Antwerp in Belgium.

Promising 21-year-old youngster Allahyar Sayyadmanesh, who plays for Hull City, will surely be behind the prolific Taremi in the striker’s pecking order, as Queiroz prefers a 4-2-31 or 4-3-3 formation with a lone attacker up top surrounded by wingers.

The forward was recently named as one of the 60 best young talents in world soccer by The Guardian. 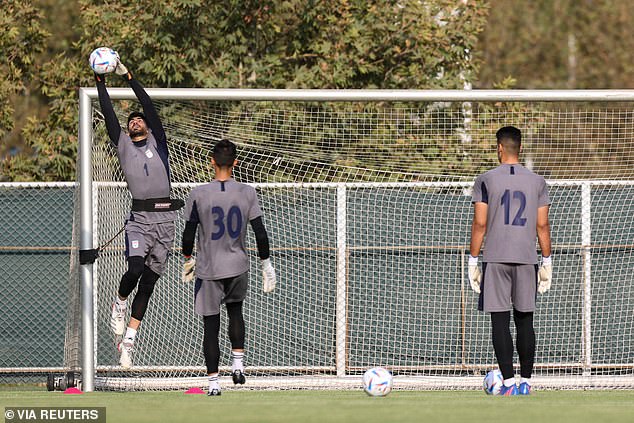 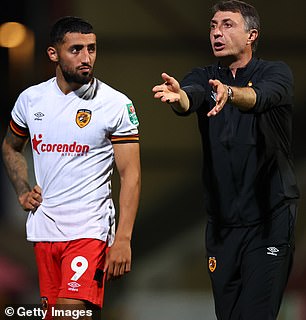 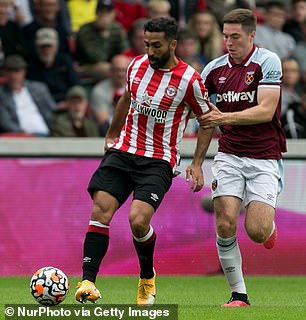 ‘As a professional coach, I know that all teams in the world have progressed,’ Queiroz recently said. ‘We will also do our best to face our opponents in Qatar and will be fully prepared for the campaign.’

Azmoun and Taremi will look to add goals to their personal records as both are currently third and seventh respectively among Iran’s all-time top goal scorers, as now retired striker Ali Daei, who played for Armeni Bielefeld, Bayern Munich and Hertha Berlin, tops the list with 109 goals in 149 games between 1993 and 2006.

Ehsan Hajsafi, the team’s captain, will be featuring at his third World Cup since first being selected to represent Iran in 2008. The AEK Athens left-back has 121 caps for his country and is only 30 shy of record-holder Javad Nekounam – 151 caps – who is now retired.

Brentford’s Saman Ghoddos is the only current Iranian featuring in the English Premier League after winger Alireza Jahanbakhsh moved to Dutch side Feyenoord last year from Brighton. Both are expected to start for their country in their first game against England.

And although expectations are low for the Islamic Republic, Iran are the highest ranked Asian team in Qatar and previously appeared five times in the edition of the World Cup in its history (1978, 1998, 2006, 2014, 2018).

The team holds a distinct rivalry with South Korea as both fight for the most AFC Asian Cups along with Japan. The competition is the second oldest continental football championship in the world after Copa América and Iran hold three titles.

Iran’s journey to qualify for the 2022 World Cup went relatively smoothly by topping Group A after being drawn with Iraq, Hong Kong, Cambodia and Bahrain. 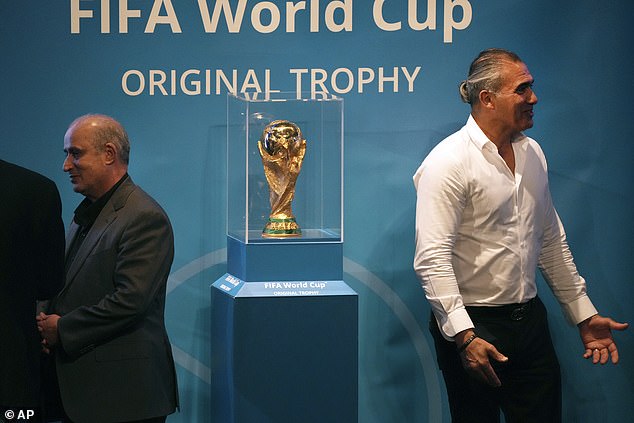 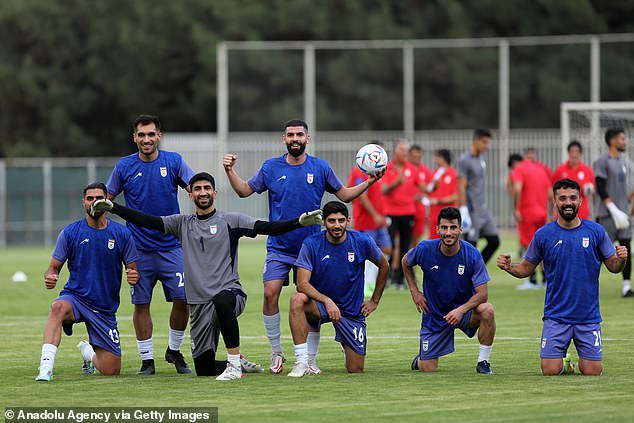 Skocic spearheaded the Iranians to the World Cup finals and won 15 of his 18 games at the helm of the Middle Eastern side after taking over as the full-time replacement for Marc Wilmots, who put the team at real risk from losing out on qualifications after draws and losses against Bahrain and Iraq.

Iran became the thirteenth team to qualify for Qatar after a 1–0 win against Iraq at home in its roughly 79,000-seater Azadi Stadium in January.

‘The Persian Stars’ will face England on November 21, before playing against Wales four days later before taking on the US for the first time since 1998 in what was once dubbed as ‘politically charged game in World Cup history’.