Bukayo Saka’s priceless reaction was caught on camera after he was named man of the match in Arsenal’s win over Brighton. The 19-year-old set up Alexandre Lacazette for the only goal as Mikel Arteta’s side recorded a second successive Premier League victory.

Arsenal’s win at the Amex Stadium further eased the pressure on Arteta following the 3-1 victory over Chelsea at the Emirates on Boxing Day.

It lifted the Gunners up to 13th place in the Premier League, with Arteta’s side now nine points clear of the relegation zione after hovering dangerously close to the bottom three in recent weeks.

Saka played a crucial role in the much-needed victory, putting in a performance full of energy and running as Arsenal struggled to break down Brighton’s stubborn defence.

The teenager was instrumental in the Gunners making the breakthrough, racing down the right wing before setting up Lacazette, with the Frenchman scoring just 21 seconds after coming off the bench. 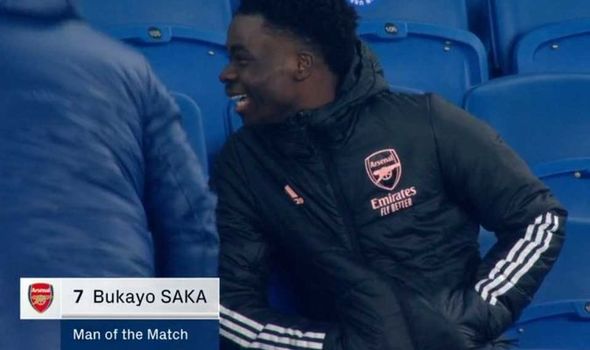 Saka was taken off with an injury late in the game, with his heroics having earned him the man-of-the-match award.

It appeared the youngster couldn’t believe he was picked out as the best player – but Gunners fans certainly could.

One fan responded to the picture being posted on Reddit, describing Saka as “our player of 2020”.

Another said: “Lad well and truly deserves it. the run he made for the assist was absolutely phenomenal. But not just that, ran the show throughout the game. Can’t love this guy enough. Lil chili has my heart.”

Another supporter said Saka was “Collecting MOTM like they’re Pokemon”, while one fan agreed, saying: “What a player seems to be our motm most games.”

Gunners fans will now hope the teenager’s injury is not too serious, as his form has been one of the bright spots in what has so far been a worrying season for Arsenal.

Arsenal will target a third straight win whe they visit West Brom on Saturday, before beginning their FA Cup campaign at home to Newcastle United a week later.