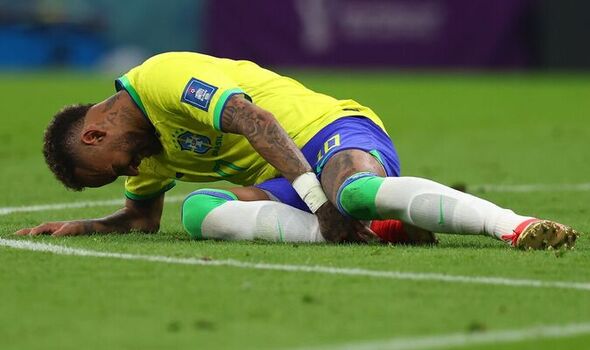 Brazil’s World Cup hopes have taken a blow with star forward Neymar ruled out for the remainder of the group stage, according to reports. Former Manchester City defender Danilo is also expected to miss the Group G clashes with Switzerland and Cameroon on Monday and next Friday, respectively.

Neymar was forced off during Brazil’s 2-0 win over Serbia on Thursday. A scan on Friday morning showed that the Paris Saint-Germain star has sprained his ankle.

Tite’s side went on to triumph without Neymar but his absence will be a major issue in a tough test against a strong Switzerland team. Richarlison bagged an impressive brace against Serbia, including a wonderful acrobatic effort late on.

The Brazilians will hope that the Tottenham ace can step up in the absence of Neymar. It is unclear when the former Barcelona attacker will return to full fitness, with his nation’s hopes largely pinned on his availability.

Brazilian publication SportTV claim that Neymar will miss the group stages alongside full-back Danilo. Neymar will have just four days between the December 2 clash with Cameroon and Brazil’s likely last-16 date – should his side qualify for the knockout rounds.

Head coach Tite told journalists on Thursday evening: “We are confident that Neymar will continue playing in the World Cup.”

National team physio Rodrigo Lasmar added: “We need to wait 24-48 hours in order to have a better assessment. We have not scheduled any MRI and tomorrow we’ll have a new assessment.”

Defender Danilo also suffered an ankle problem but limped through the final few minutes of the victory. Neymar risked further damage by spending a further 11 minutes on the pitch after suffering the initial problem.

Neymar was seen hobbling off in tears as he was replaced by Manchester United starlet Antony on 80 minutes. The iconic winger was in clear discomfort as he sat on the substitutes’ bench with his ankle wrapped in ice and a bandage.